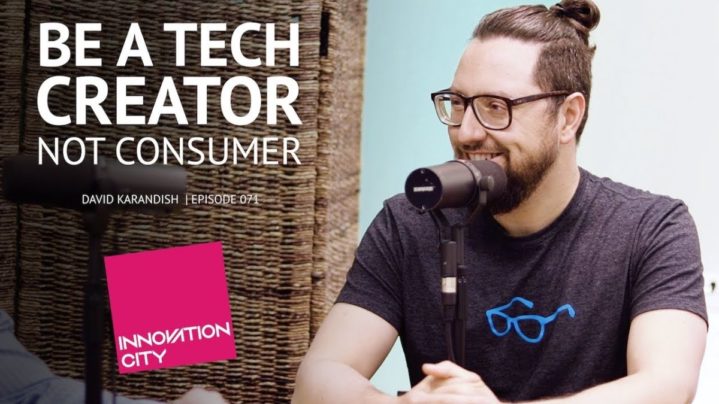 Prepare.ai, the artificial intelligence conference hosted in St. Louis is the brainchild of David Karandish, who is most well-known for founding Answers.com. Prepare.ai and represents the non-profit arm of his latest company, AI Software, and it is on a mission to transform St. Louis into a highly skilled workforce hub for artificial intelligence.

Karandish recently joined the Innovation City podcast to discuss the values that drive him as a serial entrepreneur. AI Software and the non-profit Prepare.ai arm represent Karandish’s eight and ninth venture.

In an early part of the episode, Karandish makes a fascinating reflection, “I think early on in a startups life, a lot of what you’re trying to figure out it, ‘should we exist in the marketplace?'” As you listen on, what’s remarkable is how Karandish’s latest ventures are founded upon values that can be traced back to earlier initiatives in his career, such as Create-A-Loop.

That alone demonstrates a key idea of the episode, that of looking for transferable failures. What it also shows, is that our values as entrepreneurs often persist even when our ventures don’t – thus we can return to them at any time, if we are so called.

Sure, every successful entrepreneur would probably list “creativity” as one of their core values, but Karandish has a specific method of finding his. After the enormous success of Answers.com, the company that Karandish and his partners eventually sold for 900 million dollars to a private equity firm in 2014, he wanted to take some time to figure out what he was going to do next, what direction he was headed.

So, he and his wife, gathered his family and got out of his usual environment of offices and meetings and took a trip to the mountains of Montana. He finds that escaping the concrete jungle fosters inspiration, and he came back refreshed, with what he called a “laundry list of ideas.”

One of those concepts was Jane.ai, the founding product of his next big company, an artificial intelligence platform that makes a company’s information accessible to its employees through chat, or, as Karandish describes it, “SIRI for the workplace.”

Thinking Ahead of the Curve

While pondering his next move in Big Sky country, Karandish thought about what area of computer science seemed to be on the cusp of becoming something huge — an industry that was about to explode.

“I heeded some advice that I had heard from, from Jeff Bezos — not directly but from an article or something — and he he did kind of one of those Magic Quadrant four boxes… my synopsis is:

And so very similarly.. I knew that if I didn’t do an artificial intelligence startup next, I would regret it the rest of my life. So that’s how I picked.”

Artificial Intelligence was the one answer to which he kept returning. Everything in the world of technology, phones, cars, search engines, etc., seemed to be moving in the direction of AI, so Karandish put all his effort into this new startup.

Enterprise business operations seemed to be one area where the application of artificial intelligence had not yet been fully realized. And thus, Jane.ai was born.

Before finding success with Answers.com, Karandish had tried his hand at six, yes, six different startups that had all failed. As he explained on Innovation City, “it’s easier to fail when the stakes are low.”

Starting those businesses when he was still in college allowed him to make mistakes with little risk, Karandish explains, “The stakes are a lot lower at that time. People are more willing to help you. Your friends will join you. You’ll work for pizza instead of a real salaries. So, I think there’s a resilience that you can build up, if you’ve learned how to fail when you haven’t put it all out on the line.”

That resilience builds up a “mental muscle,” as he puts it. Karandish was able to take those relative failures, learn from them, and transfer that education into his next venture, to eventually cultivate what became the winning formula that propelled Answers.com into the juggernaut it ultimately became.

“If you can fail at something and have a transferable piece of knowledge out of it that you can go and take with you to your next gig — that will help that next thing go better — that’s a different type of failure. It’s a transferable failure.”

A few years ago, Karandish looked around his hometown of St. Louis and saw the socio-economic divide that split it in two. He set out to determine what he could be done to make a difference.

There is no mandated computer science education at all in Missouri at all. The children from lower-class areas of town have little to no access to the field of computer science and he did not want to see them left behind in a world that was quickly accelerating.

To solve this, he and his partners founded a non-profit organization dedicated to bringing computer science instruction to students of the St. Louis area. They called it “Create-A-Loop.”

Practicing radical inclusion of children from all areas of the city, regardless of race or economic background, Create-A-Loop focuses on teaching the fundamentals of computer science and bringing students together becoming “creators, not consumers.”