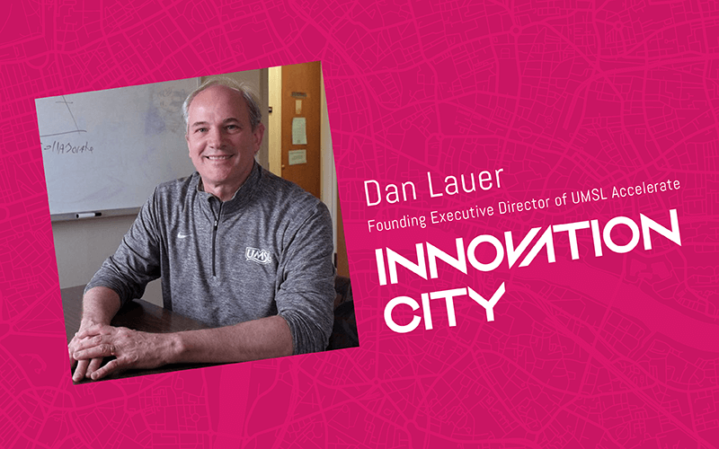 Dan Lauer is the brains behind one of the most successful baby doll toys ever invented.

At EQ we wanted to revisit this episode to let readers know about the forthcoming Entrepreneur Quest Student Accelerator Pitch Day, coming up on Thursday, March 19th. Come and support 11 Student Startups competing for $30,000 in prizes (last year’s winner, HireMe, went on to win a $50,000 Arch Grant).

Dan Lauer is the brains behind one of the most successful baby doll toys ever invented.

His Waterbabies products have enjoyed decades of continuous distribution with 24 million sold. That’s enough to give every Australian their own doll, with a few to spare.

Dan is also now the founding Executive Director at UMSL Accelerate, an entrepreneurship program, support network and resource center. It’s available to students, faculty and community at the University of Missouri-St Louis.

The podcast, Innovation City, spoke to Dan about his experiences as an entrepreneur. It soon became obvious that his background is an invaluable source of wisdom for all those involved with the award-winning programs.

Dan offers this advice to would-be entrepreneurs, “Take chances in your life when you can afford to do so.”

He was 26, had a good career, and wasn’t married. Cabbage Patch dolls were all the rage. The toy industry had become fashion-led.

He remembered the dolls he and his sisters had created in their childhood out of balloons filled with water. They even painted faces on them and put them in diapers. The dolls weren’t very stable. “There were a lot of funerals,” Dan says with a smile.

He thought there was a place to develop the concept and his Waterbabies were born. In their day, Waterbabies were a disruptive innovation, Dan explains. Although it was a different time, the same disciplines and principles applied.

Like many entrepreneurs starting out, he lacked two things: time and money. He made a plan and hired himself to work for ten hours a week on his business venture setting aside $100 dollars a month.

He’d have preferred it if Mr Mattel had just handed him a million dollars to start his company, he says. He knows that the big guys get thousands of letters and emails a week from entrepreneurs asking for financial investment. Most won’t ever get read.

Dan’s crude prototypes got lots of rejections from the companies he pitched them to. But the feedback wasn’t all bad.

That was enough for him to continue believing in his product. In the end he raised a substantial sum and made 5000 dolls.

Despite having clear plans, everything went wrong, he says. Many of the dolls leaked during shipping.

This was right in the middle of his marketing campaign. He had a commercial running that he’d made with the help of friends at a fraction of the regular cost.

The bank was getting testy with him, and he was having to surreptitiously run around between stores replacing damaged dolls that he and his family had repaired.

It was around this time that a store manager said to Dan, “You’ve got a hot water bottle doll, right? It’s warm and cuddly. It’s November and it’s cold. Why don’t you stand at the front of the store and hand them to customers?”

“We sold hundreds of them,” Dan explained. A truck raced every night to New York to pick up the dolls from an old factory there.

For Dan, the further successes of his product came through constant innovation. He knew he needed to keep Waterbabies fresh so that the big guns like Walmart and Target didn’t lose interest.

That meant new features and price points for the dolls which could range from 5 to 50 dollars apiece. He also used 25 percent of his budget to create new versions of the dolls, such as one that gets warm without wires.

He’s always been looking out for that ‘leap’ technology along with core innovation to keep things refreshed. Now that the dolls are more than 25 years old they have that ‘loved by a kid, trusted by a Mom’ thing going on.

Dan has always been keen to share the knowledge he acquired through Waterbabies with others.