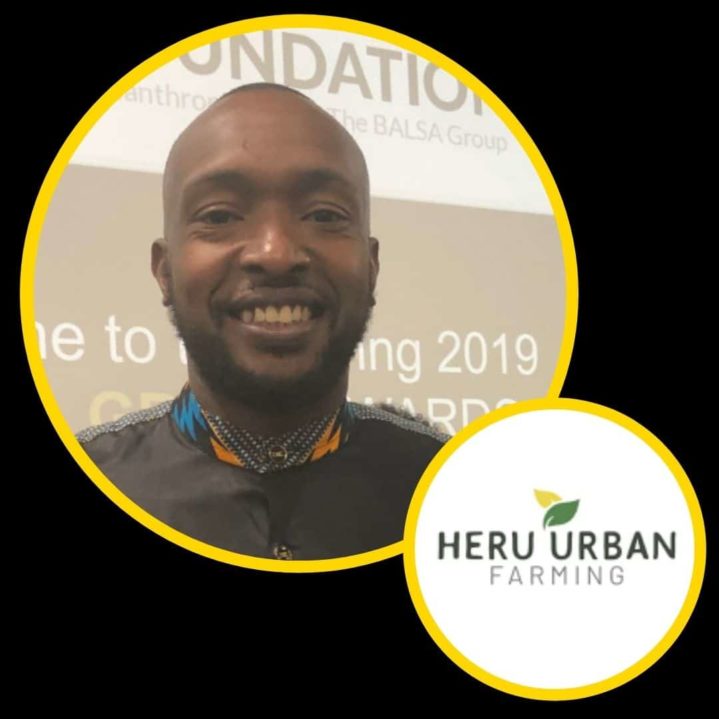 Tyrean ‘Heru’ Lewis converts unused urban space into small farms where he grows fresh produce. He runs a door-to-door fresh groceries delivery service that operates on a "Buy One Give One" basis: for every five delivery customers, he offers the service to free to residents in urban food deserts.

Listen to Tyrean ‘Heru’ Lewis and it won’t take you long to become inspired by a man who has vision and is bringing a sprinkling of health, happiness and hope to his community. He has a passion for urban farming and that’s giving locals access to fresh, affordable produce right on their doorstep.

Innovation City spoke to Tyrean about his journey to success. You can find out more about Tyrean and his company, Heru Urban Farming at heruurbanfarming.com.

Tyrean will be speaking at St. Louis Startup Week and joining our roundtable discussions at EQ Ecosystem Labs. Register here to join the conversation.

Meet the Soul Farmer and Kingmaker

Tyrean recently took on the spiritual name of ‘Heru’ which means king or liberator. It’s helped empower him to build on his background in health and education and do something meaningful which inspires others in his community.

His passion for the earth runs through his genes. He’s a fourth generation grower of produce. His great uncle set up a black cooperative of around 20 farmers back in the 1950s. They had about 20 acres of land between them and specialized in growing tomatoes.

A couple of years ago, Tyrean wanted to buy some fresh produce without having to make a round-trip of several miles. Disappointed with what was available locally, in the end he found he had to drive further and further away to find anything decent to eat.

The geographical imbalance in the availability of good quality produce inspired him to want to do something about it. This was especially because he knew that, unlike him, many of neighbors didn’t have the luxury of a car to drive to outlets which sold good food.

An End to Food Apartheid

Tyrean has picked up the term ‘food apartheid’ from urban gardening guru Karen Washington. She was so unnerved by the food inequalities between rich white and poorer black neighborhoods that she coined the phrase to describe the dietary inequity facing America.

It’s an observation that’s been highlighted in the Black Lives Matter movement and COVID-19’s heavy toll on people of color.

For Tyrean, giving people access to better locally produced food is an opportunity. It’s evidence of the good which can actually be done in a community and it harks back to a bygone era when far more people were growing their own produce.

Importantly, it’s also an opportunity to create jobs and economic empowerment. Tyrean is proud to already be employing people.

A Man With a Vision

Three years ago, Tyrean became aware of an open plot of land across the street from his house on the west side of St. Louis. He sat on his porch and visualized in intricate detail exactly how it could look, from the positioning of bee hives to beds full of fragrant flowers.

Tyrean then discovered that it was possible to rent land in St. Louis for as little as 5 dollars for 5 years, as long as it was for the purpose of growing food. He took the plot on. At first he just had a couple of beds but passersby became so inspired that they helped out and he’d exchange produce for labor.

By his second year, there was so much demand for what he was growing that he didn’t have enough supply. It was at that point he realized he was sitting on a great business opportunity.

He took classes on farming related issues and networked with other growers. He picked up confidence along the way and, despite initially looking for grant writers, decided to do that job himself.

Four out of eight of his applications for grants were successful, including one for $5,600 from the St. Louis Philanthropic Organization. He was then able to take on more land with the aim of becoming a ‘for profit’ businessman.

A Helping Hand and a Boost of Confidence

Tyrean was able to secure more help, this time from the St. Louis organization, WEPOWER. It’s an accelerator program for black and Latino entrepreneurs and aims to increase their chances to build wealth and enhance economic growth in their communities.

This help gave Tyrean the tools he needed for the best chance of success. It taught him marketing techniques, accounting skills as well as how to structure his business. It also helped him understand how to navigate government red tape, something that he says he would never have known how to do on his own.

Tyrean wants ‘food apartheid’ to become a thing of the past. He believes that will partly come about through others becoming urban farmers like him. Incidentally, everything he grows is natural and organic.

His advice to other would-be growers is to do careful research, talk to family members who are keen gardeners and grow what you like to eat. He also feels it’s important to be open to asking for help and not let pride get in the way.

Tyrean is now on a roll. He’s looking into purchasing cattle and he dreams of owning a homestead of around ten acres where he can raise chickens and produce his own beef. His goal is to reach a time when life isn’t such a struggle and when he can relax more and enjoy watching his children succeed.