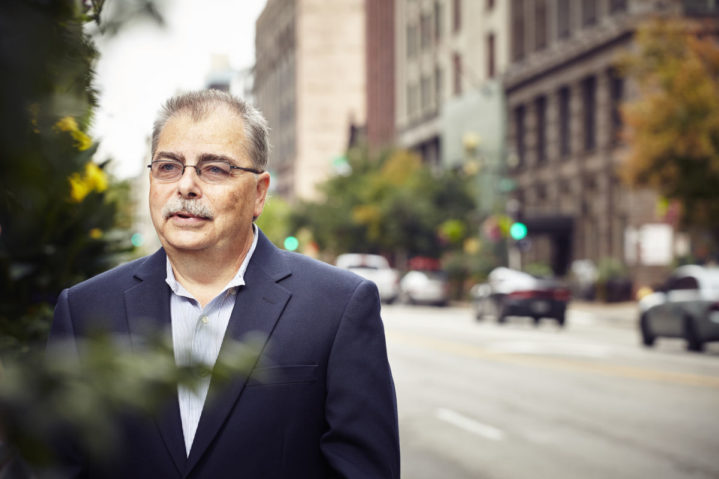 Man in the Middle

As millions of sports fans across the country hunch over their computers and smartphones stressing over their fantasy sports teams, Brian Matthews sits in a meeting room on the eighth floor of T-REX in Downtown St. Louis. Most of those armchair managers have never heard of Matthews, but he’s largely responsible for their fretting and fussing.

“Fantasy sports is what started all this for me,” Matthews says. “We were passionate fantasy baseball players. We really built our business around baseball.”

After graduating as a Mechanical Engineer from what is now Missouri University of Science & Technology in 1981, Matthews started working as an engineer at McDonnell Douglas. Ten years later, he and his wife Carol launched CDM Fantasy Sports, one of the first and largest fantasy sports companies in the U.S., striking the match on a fuse that would explode into a nationwide phenomenon in the coming decades.

After partnering with Sporting News, the couple eventually sold the company in 2006 to Fun Technologies for $10 million, but not before making a statement in the process.

In 2006, a federal judge in Missouri ruled in favor of CDM Fantasy Sports, who had sued Major League Baseball over the right to use players’ names and statistics. When the Supreme Court refused to hear the case, an industry was born.

These days, Matthews no longer plays fantasy baseball. He and 12 partners are busy managing a portfolio of more than 30 companies as well as serving on the board of several of them. Even in his late 50s, Matthews is more comfortable in the boardroom than on the golf course.

“I tried the retirement thing; it’s not for me,” he says. But he’s also had his fill of the frenetic energy of launching a company, preferring now to operate on a larger scale. Matthews is the co-founder and managing partner of Cultivation Capital, a venture capital firm that invests in technology and life science startups.

“I kind of ran out of good ideas. I think at a certain age you do, or you just don’t want to work that hard. It is so hard to do what these entrepreneurs are doing.”

For the energetic but inexperienced, having someone around who knows the road is helpful. One of the region’s most successful entrepreneurs, the easy-going Matthews also acts as a shepherd to founders, advising them as they move through the trials of growth.

“I certainly view myself as a collaborator. It’s one of my strengths. Not only collaborating with the general partners, but the ecosystem in general,” he says. “I spend a lot of my time just trying to do the right thing for the community. I do take a big-picture look.”

One of the community’s biggest needs is bridge gap funding. Companies have a few phases in which they need cash to make the next leap; Cultivation Capital works as a trampoline for startups that have come out of an accelerator and need to access deep pockets.

“Late seed, pre-[Series] A is where we play,” he explains. “We are going to be this bridge capital to the A-round. We like to say the A-rounders are the professional money.”

“We’re entrepreneurial people, we’re not professional venture capitalists. So it’s our job to identify the right companies that will ultimately meet the fancy of the professionals, where they’ll write the $5 million to $10 million check.”

But making it to Matthews and his investment group is still a major challenge. Companies need to be posting monthly revenue between $50,000 and $150,000 and growing by at least 10 percent month after month.

That gap is one of the major holes in the ecosystem, but as the region’s collaboration-based community continues to grow, Matthews sees the chasm narrowing.

“We might have had a couple investors that were friends. We never as a community adopted some of these companies. I think that’s what has changed.”

But the big change will come with the city’s first major exit, something Matthews senses is on the horizon. “Thirty million dollars might not change St. Louis. Five hundred million will change a lot in St. Louis,” he says.

“It changed Chicago when Groupon had their exit. Yeah, it made a bunch of instant millionaires, which certainly helps because they redeploy the capital, but the people who didn’t invest said, ‘I’m not going to miss the next one.’ I would think it will happen in the next few years.”

The fear of missing out draws more money in, and Matthews pegs $500 million of total investment in the region as a mark of success. That number was at $380 million in 2013, before dipping to to $220 million last year. Five hundred million would put St. Louis in the top 10 cities in the U.S. in terms of venture-invested money.

Matthews believes that such a future is close, and though he may not be building the companies himself anymore, the entrepreneurial rush hasn’t waned.

“It is so fulfilling when you get on a rocket ship,” he says with a wide grin. “It’s the ride of a lifetime.”

That’s why he prefers work over rest. After all, a rocket ship can take you a lot farther than a golf cart.