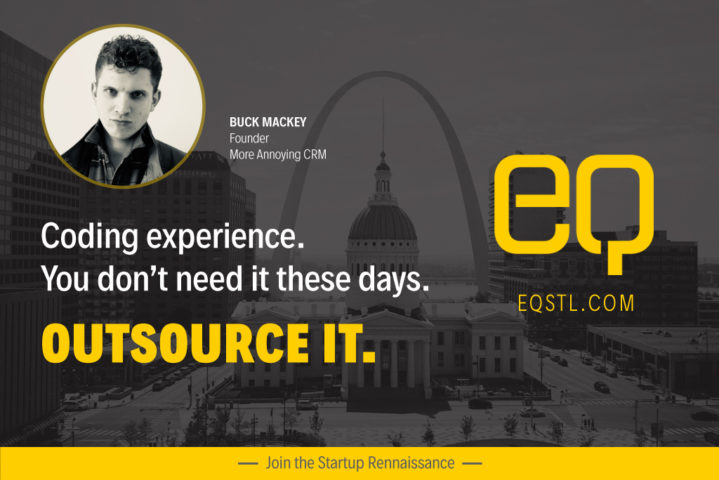 In 2014, LACRM received an Arch Grant, and just last year the company was recognized as one of the St. Louis Business Journal’s Top Places to Work in St. Louis.

Click here for a more interactive version of this article

Now, a new entrant into the CRM market in St. Louis promises an aggressive growth strategy and is rumored to be extremely well-capitalized. The startup’s founder is bullish on achieving unicorn status.

EQ sat down with the entrepreneur for an extended interview on-camera to discuss his new venture, and his unorthodox go-to-market strategy.

“Every good idea is out there already. So what you have to do is steal from the good ones,” Mackey said.

Living up to their name — Less Annoying — continues to eschew almost all advertising and marketing tactics, choosing to rely on word of mouth instead. Mackey’s plan is to hijack their brand name by targeting related keywords like “annoying CRM” using Google AdWords.

“I would just put all that money into AdWords and I’ll take all the branded terms they got. Next thing you know, More Annoying CRM is on top.”

Fundamental to More Annoying CRM’s platform concept is that sales tactics like sending thousands of emails or making hundreds of calls is a fundamentally inefficient way to become an influencer.

“You have to find other ways… Those traditional methods just don’t work anymore.” says Mackey.

Utilizing the typical sales pipeline management tools common to all customer relationship management software, More Annoying CRM, goes the extra step of pinging your friends on social networks to let them know every time you do something in the interface.

“Your efficiencies are going to go through the roof. You’re going to look like you’re checking something every single moment of the day. How often can you say that you do that already?”

Speaking directly to the Silicon Valley investor mindset of developing products with a “viral coefficient” built natively into the user journey, More Annoying CRM’s core feature is to let everyone know you’re working – literally, all of the time.

IoT Makes It More Than A CRM

Behind the notification mechanic is the hope of attracting new users to the new CRM platform.

“Marketing automation. That’s a buzzword. But yeah, we want everyone to know what you’re doing. At all times. And we’re hoping, in that, that people who aren’t even in business start using it.”

To attract early adopters and innovators, Mackey is planning dozens of hardware integrations saying, “we have to get back to our values.”

By that he indicates that to be a successful salesperson of the future, you have to look to the example set by successful salesmen in the past, who had the grit and tenacity to build a business with nothing more than a rotary phone and a rolodex.

Sales and marketing automation just how they did it in the good ol’ days ? pic.twitter.com/An6fBX1vQX

Those are just some of the character traits Mackey is looking for in a team to build a More Annoying CRM.

I’m all about work life balance. Go work hard and let your kids stay in touch with you ? pic.twitter.com/XaZ7u7AcKP

“I know there’s some people out there… You wanna join Buck Mackey? You wanna make a million bucks? Come join me. We’re going to make it big. Believe in yourself,” Mackey said, “But believe in me first.”

The Less Annoying team took to Twitter to respond to the breaking news.

The foundation of the @LessAnnoyingCRM world is shaken by this breaking news! Check out our newest CRM competitor to understand why. @TylerMKing what are we going to do? https://t.co/Zz4Bh4bPhv

Normally I say don’t pay attention to competitors. Just keep your head down and focus on your customers. But I gotta admit, I’m a bit worried about this new CRM company: https://t.co/E758KCmp3Z

Congrats to our new CRM competitors from STL! If you’ve been on the hunt for a CRM that is more complex, difficult to use, and annoying, be sure to check this company out! #MoreAnnoyingCRM https://t.co/AZEMxS3aHB

But seriously, friends, don’t sweat it too much. APRIL FOOLS!