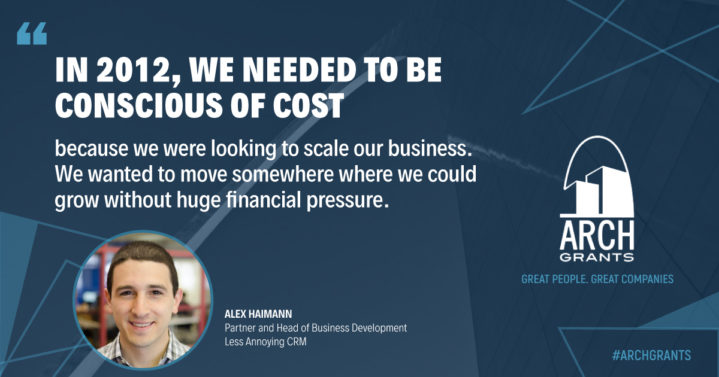 Network Density, Access to Talent and Maximizing Your Capital Are All Good Reasons to Move Your Startup to a “Second City”

New entrepreneurs might assume that they have to go to Silicon Valley or New York to get their companies off the ground, but such attitudes are changing. Savvy entrepreneurs are discovering that the road to success may not run through Silicon Valley, New York, or London but rather through “second cities” like St. Louis that boast a low cost of living, robust regional networks, a wealth of highly skilled talent.

Smaller “second” cities can offer a lower cost of living, robust regional networks, and a wealth of highly skilled talent.

Late 2017 saw a shift in cultural attitudes, where even respected VCs are beginning to shun Silicon Valley, to instead embrace “second cities” like St. Louis as launching pads for successful startups. EQ reached out to several Arch Grant Recipients to find out what such cities could offer to new companies, in their own words.

“Part of our mission is to demonstrate that cities like St. Louis already have the ecosystem in place to grow startups from the ground up,” Emily Lohse-Busch, Executive Director of Arch Grants told EQ.

A Longer Runway for Doing Business

When entrepreneurs think about starting a company, their eyes often turn to the Bay Area, Chicago, or New York. Though these regions are well-known as hotbeds for venture capital, innovation, and successful startups, many companies find they’re better served by looking elsewhere.

If you’re looking for office space, San Francisco or Manhattan are the two most expensive places in the country to rent commercial property. When it comes to apartments, the average rent for a one-bedroom apartment is over $3,000 per month, in both metro areas.

Such costs can present major drawbacks for startups, who need to keep overheads as low as possible to simply get their businesses off the ground. Fortunately, smaller cities offer much more reasonable costs of living for founders and employees alike, easing the financial burden at a moment when capital is often limited.

Alex Haimann, Partner and Head of Business Development at Less Annoying CRM, notes that cost of living was a significant factor when choosing their new home base.

“In 2012, we needed to be conscious of cost because we were looking to scale our business,” says Haimann. “We wanted to move somewhere where we could grow without huge financial pressure.”

Pravina Pindoria, CMO of Tallyfy, had a similar experience in London, where she and CEO Amit Kothari founded the company in 2014. “London was too oversaturated for us. We were living in a shoebox of an apartment…trying to get this idea off the ground,” she remembers. “Arch Grants showed us that St. Louis could offer everything we needed.”

From the outside looking in, it may seem like the coasts offer the best networking opportunities. In fact, smaller cities may offer more valuable connections for young companies.

“St. Louis has been great for networking,” says Avi Silverberg, Co-Founder and CEO of MyStrengthBook. “If I want an intro to anybody locally, I can get that tomorrow. We don’t have to compete for introductions.”

Strong regional networks give entrepreneurs easier, more immediate access to the resources they need to be successful. But in larger cities, founders without pre-existing connections might not even be able to get a foot in the door.

Tiffany Chimal, Co-Founder and COO of MakersValley, found that St. Louis could offer her company the support it needed in just the right niches.

“We met an alumnus of Arch Grants during an accelerator program in Puerto Rico, who told us about the fashion and design resources available here,” she recounts. “There’s also a strong Italian community here, which is great for us since we work with Italian manufacturers.”

Pindoria echoed the value – and openness – of St. Louis’s entrepreneurship community, admitting she was blown away by the amount of support available.

“As soon as we landed [in St. Louis], [Arch Grants] said, ‘Who would you like to speak to?’” she says. “Within a couple of weeks, we had these warm introductions made with various companies — large and small.”

“Second cities” tend to be university towns that have a highly educated talent pool actively looking for jobs after they graduate. Local demand for modern approaches to work and non-traditional career opportunities means startups can compete for more qualified employees, more effectively. Even better, entrepreneurs can directly recruit from elite universities, which can furnish top talent in tech and the life sciences.

Less Annoying CRM has taken advantage of this by jumping into local recruitment with full force. “The biggest asset that St. Louis has going for it, is its talent pool,” Haimann says. “If you’re looking for a thousand new employees, [smaller cities] may not be the way to go. But startups can easily get what they need.”

Most of all, startup founders draw from the palpable energy among St. Louis’s young talent.

“I’ve lived in many places over the course of my life, and St. Louis has something unique,” Chimal says. “There are so many untapped resources, so many people trying to rejuvenate this city and build something new. We’re looking forward to hiring here, for sure.”