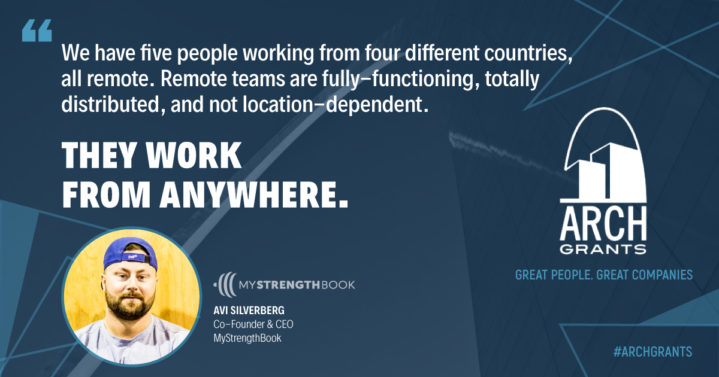 Avi Silverberg is on the leading edge of a movement to redefine work in the digital age. He’s the co-founder of MyStrengthBook, a custom software package designed to help athletes and coaches build workouts and track and analyze strength training data.

But it’s his approach to work – not just workouts – that is innovative. As EQ discovered at the recent VentureBeat BLUEPRINT Conference, after talking with UpWork CEO, Stephane Kasriel, who explained to the guest in attendance that, “work is no longer tied to place.”

As technology enables collaboration across distance and remote workforces become a path for companies to scale cost-effectively, local economies will find themselves in need of an entirely new skill: managing a remote team.

Adapting the Workforce to a Globalized Economy

Between 2012 and 2017, Silverberg was Head Coach for Team Canada Powerlifting (at his career-best, he benched 661 pounds). Last year, MyStrengthBook won an Arch Grant and Silverberg moved to St. Louis to focus on growing the company’s operations locally and around the globe.

“Part of Arch Grants’ mission is to bring companies that contribute new skills to the region and can radically rethink how business is done in St. Louis today,” said Emily Lohse-Busch, Executive Director of Arch Grants.

“In MyStrengthBook, we saw founders that have adapted their business processes to the opportunities present in a modern work environment and it made sense to offer them a home base from which to build effective remote teams.”

From a coworking desk at T-REX, Silverberg is learning the ins and outs of running an effective team in four countries – EQ sat down with the Arch Grant Recipient to talk about the lessons he’s learned along the way.

“The network in St. Louis is really well-developed,” Silverberg told EQ. “If I want an introduction to anyone locally, I can get that tomorrow. I’ve been talking to other sports startups that have succeeded or failed and can learn from what has worked for them.”

Silverberg, for his part, works from T-REX, the co-working space and technology incubator, in downtown St. Louis. But his team spans four countries: Chile, Canada, the United States, and Colombia.

“We have five people working from four different countries, including my co-founder Mike MacDonald, all remote,” says Silverberg. “Remote teams are fully-functioning, totally distributed, and not location-dependent. They work from anywhere.”

Silverberg recommends that a remote team starts local, then expands outward. “Our hope is that a person will work in our office for three months, then continue to work remotely afterwards, in whichever country they want,” Silverberg said.

By onboarding employees in person and letting them work remotely once they’ve gained experience, MyStrengthBook achieves a win-win: flexibility for the team; higher employee retention, and less turnover for the company.

People who want to live abroad – whether for family or pursuit of the digital nomad lifestyle – can still grow and advance with the business.

MyStrengthBook’s remote team grew out of an unlike place: its summer internship program for college students.

Many businesses worry that their interns will simply “take the experience and run,” moving on to other companies after the summer. But Silverberg consciously trains his interns to take on a meaningful role inside the business.

“We always hope we will be able to find a good candidate through our internship program,” Silverberg explains, “and that they will continue on after the summer program, even if it’s just part-time.”

Through this temp-to-hire program, Silverberg is building his MyStrengthBook team, in his words, “from the ground up.” By the time the internship program concludes, the students understand what their job requires.

That’s where MyStrengthBook’s embrace of remote work changes the equation: students who want the chance to travel or live in another area can keep their ties to the company, and build on the skills they developed with a remote role.

“Regular meetings can be tough, but they’re important,” Silverberg says. “It may not be everybody attending the same meeting, but you must at least check in with someone on the team regularly.”

Without prioritizing timely and constructive communication, MyStrengthBook’s remote teams would never have succeeded.

Since a company’s remote workers and its headquarters are often based in different time zones, it can be a challenge to have everybody work on the same schedule.

MyStrengthBook relies on a multitude of apps and services to connect the central office with its remote workers at a moment’s notice.

“We use Slack, and we also use a video-conferencing tool called Appear,” says Silverberg. “We use Trello [a workflow management tool], and for software stuff, we use Clubhouse, which is for ticketing and new featured development.”

A worker in Berlin might not be able to make a conference call scheduled for the late afternoon in St. Louis, but with an internal messaging service, you can reach someone whenever you need to speak with them.

“Everybody has access to everything,” Silverberg says. “We all know what everybody’s doing and when, and it’s easy to just check in with people.”

Stewart Butterfield, Co-Founder of Slack, calls this a transition from a “push” to a “pull” communication style: “[information channels] are accessible even if they’re not actually being accessed by everyone on the team.” It’s at the crux of Slack’s value proposition – and is what empowers Silverberg’s team to coordinate effectively across long distances and time-zones.

Even as MyStrengthBook is building their team bench around the world, it’s growing an even more essential 21st-century skill set here in St. Louis: adapting management styles from push to pull and maximizing a global talent pool.

Intelligent Messaging Is Getting Smarter, Everyday

The Bourbon Friday Show with Ellen Chisa from Dark

Snipe is Here to Save You From FOMO

Why St. Louis Is The Best Location For Square’s Newest Office