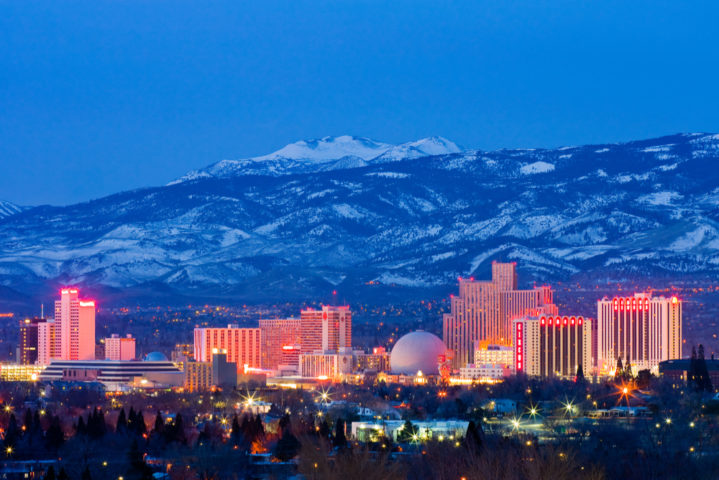 As developments like Amazon's HQ2 search and the opening of Tesla's Gigafactory 1 demonstrate, the American Heartland is grabbing the new economy by the horns. Government officials, business leaders, and startup luminaries descended on Reno, Nevada to discuss how we take the next step up.

Urban centers along American coastlines may have helped usher the new, digital economy into maturity, but they won’t be the only ones pushing the next wave of tech innovation — not if the participants of last week’s VentureBeat BLUEPRINT 2018 Conference have anything to say about it.

Not exactly a news flash, but with their rising costs of living, overcrowding, economic barriers to entry, the New Yorks and San Franciscos of the country are increasingly impractical options for companies looking to scale (not to mention employees hoping to live comfortably).

In search of not only alternatives, but entirely new opportunities as well, everyone from Silicon Valley executives and venture capitalists to local startup founders and political leaders are targeting regional hubs across the American Heartland to drive the next great wave of innovation (and help relocate their businesses).

So how do we do it? These tech moguls, VC notables, and startup hopefuls gathered in Reno, Nevada, for three days to figure it out.

Dedicated to promoting the success stories of companies that have settled down in cities just like Reno (and brought capital and jobs with them), the conference was an incredible forum in which corporate leaders and young businesses could get a sense of what 21st century prosperity between the coasts might look like. That is, if the Renos, Nashvilles, and yes, St. Louises of the country can continue to cultivate a spirit of entrepreneurship and develop the regional partnerships to support it.

If you didn’t get a chance to attend, the EQ team has got you covered. Here are 7 memorable moments that we certainly don’t mind reliving:

EQ’s own Luke Babich interviewed Nevada Governor Brian Sandoval to discuss how the state has facilitated the growth of its booming startup scene.

From 14 percent unemployment in the wake of the financial crisis to near-full employment today, Sandoval and the entire state have played to their strengths in order to attract innovative companies — as well as the top talent that wants to work for them.

Whether that’s capitalizing on federally owned land in order to host cutting-edge UAV testing or fast-tracking communication between state officials and the local business community, Nevada has provided a framework for other states looking for their own regional Silicon Valley.

Small-town mayors doing big things — what does it take to build a "culture of yes" in city government?

A conversation between @MayorSchieve of Reno, Nevada and @karenaboutgary of Gary, Indiana at #Blueprint2018 pic.twitter.com/1XDywCVami

In this fireside chat, Reno Mayor Hillary Schieve and Gary Mayor Karen Freeman-Wilson discussed what it takes for modest regional hubs to succeed in the new economy. From less red tape to minimal overhead, both mayors said that small- and medium-sized cities can craft budget-friendly business havens in order to attract innovative companies.

But it’s not just about costs. Schieve and Freeman-Wilson stressed the importance of a sense of place and community spirit in creating cities that are welcoming for the talent that follows today’s most promising companies.

“How do we help people transfer the skills they have today, into the jobs of tomorrow?”

Microsoft’s TechSpark was born in 2017 out of a commitment to boosting economic opportunities and supporting job creation in rural and regional metropolitan areas. One year later, Kate Behncken, the leader of the initiative, laid out the five pillars she sees as essential to creating a thriving innovation ecosystem outside of megalopolises.

“In Boston, we were paying 500% what we would pay for the same office in Madison.” @alexkubicek, CEO of @UnderstoryWx, on how his startup left Wisconsin to raise capital — and how costs, talent and access to institutional clients brought them back#Blueprint2018 pic.twitter.com/FxqzFKmu19

Understory left Wisconsin in 2013 because the local VC culture wasn’t ready to support their vision for aggregating unique weather data and analytics. So they headed for the coasts.

Although they attracted the venture funding they needed to drive their own growth, CEO Alex Kubicek noticed that Madison’s startup scene had flourished since their departure. As cost-of-living increases took its toll on Understory and its talent, the company made the decision to return to Madison.

Now, the company pays 500 percent less for their office space than they did in Boston, attracts incredible talent from the local university, and enjoys proximity to some of the country’s top insurance companies — a definite bonus for a company that adds context to weather-related damage claims.

5. David Walker of the Nevada Museum of Art Unites Place, Art, and Competition

“We are a museum of ideas.” David Walker of @nevadaart speaking at the @VentureBeat #Blueprint2018 conference, about how Nevada’s boom and bust cycles have influenced the city’s growth pic.twitter.com/IKT2trRDpq

As Director David Walker of the Nevada Museum of Art explained, Nevada’s present is uniquely tied to its past. Once a mecca for silver miners, then a testing site for nuclear weapons, and next a playground for the world, the state has been permanently shaped by its boom-bust cycles.

As Nevada distinguishes itself as a home for business on an international scale, Walker described how artists who synthesize the history, patterns, and experiences of a region can help that area appeal to companies looking to relocate from the coasts.

“We believe that complacency will kill.

“Once, we were the first to adopt UPC codes to gain a competitive edge. As a 55-year-old company, that type of innovation is just in @Walmart‘s DNA.”

Even as a 55-year-old conglomerate, Walmart has continued to adapt within the confines of a viciously competitive industry. As VP of Digital Solutions Chris Enslin explains, that sort of entrepreneurial spirit must be in a company’s blood if it wants to thrive.

Outside Walmart’s internal culture, however, Enslin celebrated the innovative strides taken by companies and institutions in metropolitan areas like Dallas, citing them as valued partners in the company’s long-term success. He singled out Walmart’s work with UT Dallas, where the retail giant works with Ph.D. students in order to pioneer and test advanced technology for implementation in their stores.

7. The Brookings Institution’s Mark Muro Discusses the Spread of Midtech

“What policies actually work to bring innovation and growth to mid-tier cities?”

Heartland Tech Editor @ahensel interviews @chrisheivly of @techstars and Mark Muro of @BrookingsInst to find out!

In this panel discussion with Venturebeat’s Heartland Tech editor Anna Hensel and Chris Heivly of Techstars, Mark Muro explained the two models of tech innovation he sees in use across the country today.

On the one hand, tech heavyweights such as Google and Apple dominate a coastal-oriented, top-down system in which they deliver tech solutions from highly skilled, elite-educated teams.

On the other, which Muro calls “midtech,” regional hubs empower a bottom-up process through which locally sourced tech is invented and maintained by community talent, some without the need of a bachelor’s degree. While Muro explained that the models and their practitioners must coexist with each other, he celebrated the rise of midtech as an engine for growth in the Heartland.