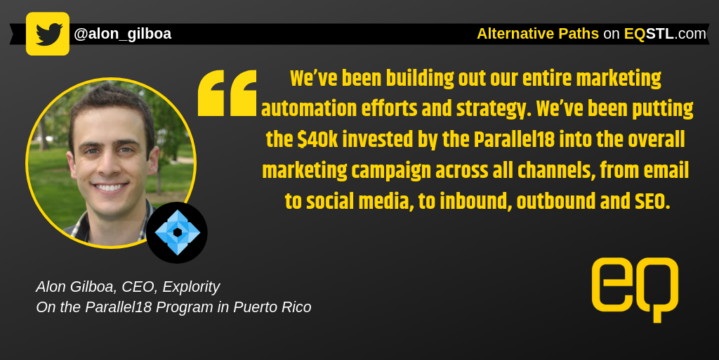 Alon Gilboa, founder of Explority, has spent the last 12 weeks on a beach. But it’s not been that chill — the motto of the Parallel18 startup accelerator program in Puerto Rico is Work Hard, Play Tropical. 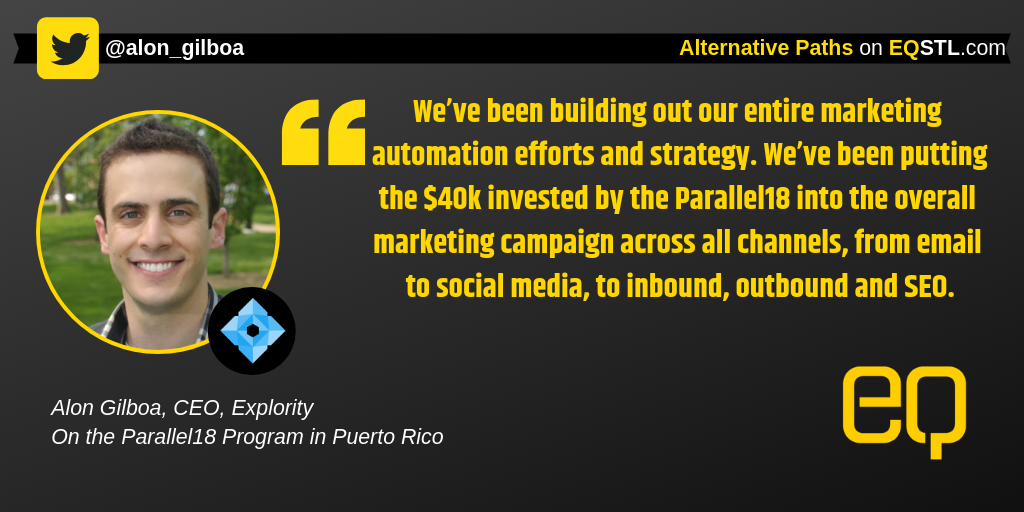 “We’ve been building out our entire marketing automation efforts and strategy. We’ve been putting the $40k invested by Parallel18 into the overall marketing campaign across all channels, from email to social media, to inbound, outbound and SEO,” Gilboa explained in a phone conversation with EQ.

“We’ve also developed a new on-boarding experience for Explority, and making it more self service experience – using automation tools to reduce the amount of hand holding for new clients, and potentially make the growth of the platform more scalable.”

Gilboa discovered the Parallel18 program via the founders of MakersValley, an Arch Grants recipient company that came to St. Louis from New York. MakersValley had participated in the program in Puerto Rico, the year prior. They spoke very highly of the experience, and the incredible connections they made, and encouraged GIlboa to apply.

At the time, Explority was applying to several well-known accelerators around the US, and Puerto Rico was not on their radar in terms of startup ecosystems. However, they saw the potential the island had, as a US territory, to serve as a bridge between the US and Latin America.

“We are participating in the accelerator in order to significantly ramp up our marketing and sales efforts,” says Gilboa. “The program provides us with visiting mentors from places like San Francisco and New York, as well as experienced local mentors. “[This] gives us a multifaceted view of how the different markets in the Western Hemisphere interact with each other. It has been incredibly beneficial for us as we continue to expand internationally.”

Gilboa hopes to learn as much as possible throughout this experience, specifically about successfully maneuvering growth and scale during the early stage of his company.

So far, the team at Explority have been thoroughly impressed with the program and the world-class mentors and learning sessions.

One thing they found the program to be particularly helpful for was defining their high-level goals for the next five months and then drilling down the weekly KPIs (Key Performance Indicators), every Monday, to keep them on track.

“I would absolutely recommend Parallel18 to other startups,” he says. “The $40k equity-free funding, combined with a robust, top-tier acceleration program is almost unheard of. The opportunity to be a part of a growing and active startup ecosystem, while making connections with people from around Latin America and the world, is truly unique.”

“Also, the fact that the beach is a few minutes away while the rest of the US has been freezing over makes work-life balance a little more bearable.”

Getting into Parallel18 required a lengthy application process that includes current metrics, financial information, and a short video introducing the founders. There is also a review process conducted by three stages of judges.

“The top companies were selected and, within a month, we were in Puerto Rico,” Gilboa told EQ.

One of the unexpected opportunities that has emerged from participation in the program, is that Explority has taken on expanding into new LATAM territories. Conversations have been started with potential partners in Brazil and Argentina and, “we’re planning to officially launch in Costa Rica and Puerto Rico, by the end of this summer,” said Gilboa.