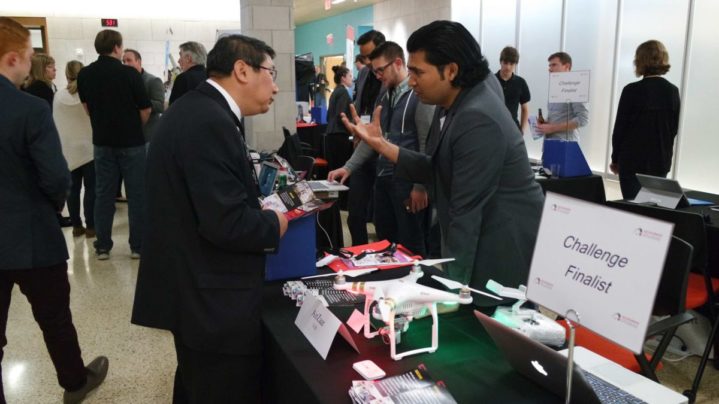 Phyllis Ellison, Director of Entrepreneur Services and Institutional & Corporate Partnerships at Cortex Innovation Community and five-time Managing Director of Startup Connection, was pleased with the turnout at Startup Connection on Wednesday, November 16, at Washington University’s Knight and Bauer Halls. The event, which has grown in size every year, is designed to give St. Louis’ top startups an opportunity to present to investors, other entrepreneurs, and all members of the innovation community.

Ellison said, “Every year we have startups that are displaying for the first time. Our group of 75 ventures is the biggest to date. So, to see brand-new startups who have not done public display come and experience the attention of the community–to see them so excited–is always incredibly gratifying.”

Attendance grew by 10%, up from 1,250 last year to 1,400. “We’re thrilled that our attendance was up again this year, ” Ellison said. “Given the number of events that night as part of Global Entrepreneurship Week, we were expecting to stay the same.” 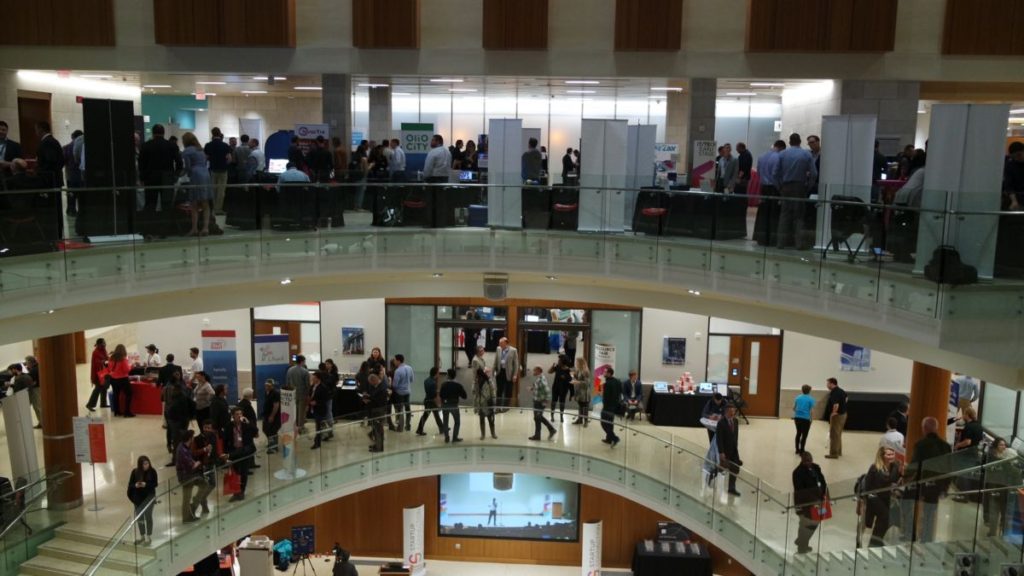 It Started as An Idea

Just as with startups themselves, the event started as just a notion. The first Startup Connection was held eight years ago during the financial downturn of 2008 and 2009. Ellison said, “Its original mission was to connect startups with leadership and management talent. At the time, corporations were laying off senior level people with a lot of experience. We were trying to connect IT startups with that sort of talent.”

The mission of the event has shifted over time as the economy has shifted. Ellison said, “In the fall of 2012, we took Startup Connection in a different direction and expanded the number of industry sectors highlighted, from focusing mainly on IT to also including biotech, manufacturing, education, and FinTech. At times we have featured other specialized sectors such as green and clean energy. We also started to include the Resource Fair on a  much larger scale. Both of those pieces together changed the direction. Since then, it’s become the biggest celebration of entrepreneurs under one room in the region.”

The 2016 Resource Fair included 58 entrepreneurship support and sponsor organizations. Ellison said, “We did have a waiting list for the Resource Fair this year.” Saint Louis University, a Gold Sponsor, hosted a booth representing its Center for Entrepreneurship manned by anonymous manual typists offering “Honest Assessments” by request. As the originator of the “‘Real” Elevator Pitch Competition held annually in the elevators of St. Louis’ 40-story One Met Square, the Center for Entrepreneurship also sent their spokesperson, Mr. Pitch.

This year, for the first time, student companies had the chance to pitch their business ideas. Washington University senior Gabe Owens, a business major and co-founder of “WiNot” with web developer Aditya Halan, pitched their idea during the Student Pitches session. In his pitch, Owens explained that WiNot is a marketplace for neighbors to share wifi.

“The fact that there are 26 million citizens without internet access in one of the wealthiest countries in the world is outrageous. It’s unacceptable. These people are losing out on job opportunities, kids don’t have the same resources to learn as other kids in their class, and this is ultimately making the already disadvantaged to be disadvantaged further.” For roughly $20 a month, consumers of WiNot can subscribe to their neighbor’s wifi. In order to pilot the idea, Owens and Halan went to New York City for a month knocking on doors to recruit testers. Of 200 people solicited, they got 50 to participate. While in New York, they attended a startup event that ultimately resulted in a Forbes article about their idea.

The student turnout at Startup Connection was particularly good from Missouri University of Science and Technology which sent 25 students.

In addition to undergraduate and high school students, Student Pitches also included The Blockheads, a group of middle school Girl Scouts that went to the White House Science Fair this past April. Ellison said, “This was a new effort this year, both designed to showcase the next generation of talent and to engage the students more.”

At the Heart of it All: Startups

Startup Connection organizers selected 70 startups to present and demo their products at the event. Industry sectors represented in the Venture Showcase and on the Pitch Stage included Products and Services, Tech-Early Stage, Bio, Education, and Tech-Growth Stage. Aunt Flow founder, Claire Coder, pitched her buy-one-give-one subscription box for tampons and pads in the Products and Services sector and ultimately won the CIC $2,000 in office space prize. Her idea provides both the service of home supply delivery as well as the charitable opportunity of providing Aunt Flow products to organizations for women in need who often don’t get the supplies they need. Coder said, “I started my first company when I was 16. It was a promotional products company. I sold buttons, magnets, compact mirrors. For Aunt Flow, I applied for an Arch Grant. I didn’t receive it, but was invited to present here, so we came.”

Olio City, a city discovery application, displayed and presented in the Tech-Early Stage space. Sabrina Mohammad-Paddock, CMO of Olio City, said, “We showcase the best there is to do in a city through events, restaurants and bars, local happenings and attractions. It’s personalized in the sense that there’s a learning algorithm in the app, much like Pandora and Netflix. Once it learns what you like through initially a quiz and later through user input, it then begins to filter those recommendations based on what it learns from you.” Right now, Olio City is in St. Louis and Chicago and expects to expand to other cities soon. The company was also featured at the Mastercard-sponsored [email protected] event the night after Startup Connection.

The startups selected to pitch each had a minute to pitch their company to a crowd of attendees. Each startup also had a booth where they could demo their product and speak with potential customers or collaborators throughout the night. Some startups gave away goods (Soozie’s Doozies aptly gave away their cookies) while others engaged attendees in their booth (Pikazo app appropriately had a photo booth).

Startup Connection was sponsored by Accelerate St. Louis, Washington University in St. Louis, Simplify Commerce by Mastercard and about 30 other sponsors at various levels, who gave away prizes in the form of cash or in-kind services.

Ellison said, “To see the community response to them was fabulous. Their pitch was great, and Polsinelli was so impressed by them that they created a prize to give them. That was a very cool thing for the community for them to do that.”

The big moment of the night was when Accelerate St. Louis distributed $120,000 in csh prizes. The $50,000 first place cash prize went to Geneoscopy; the second place $30,000 prize went to Babyation; and the third place $20,000 prize went to Pro-Arc Diagnostics. Four Bright Futures awards of $5,000 each went to Airzaar, Geneoscopy, Idiomatic and Upaya Pharmaceuticals.