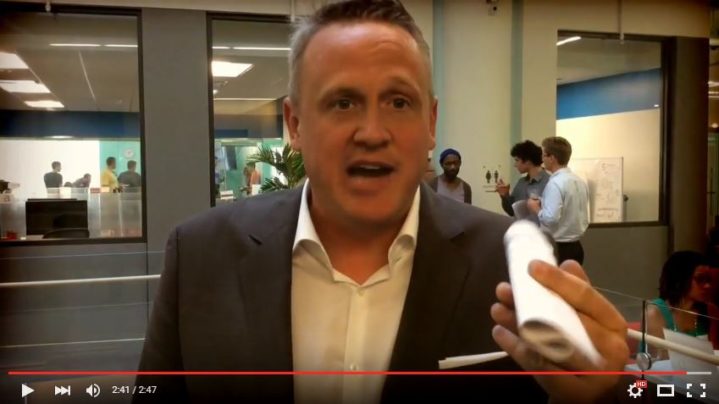 The contentious debate about St. Louis getting Uber and other ridesharing services continued this week. Here are the latest developments.

It’s been a turbulent seven days without any major decisions, but with some noticable clashes between UberX, the MTC and the usual movers and shakers (plus some new ones), especially on social media. Here’s what happened:

August 17/18: St. Louis Cardinals baseball players Jon Jay, Michael Wacha and Kolton Wong publicly voiced their support of Uber on Twitter. This is the first outing of prominent St. Louis professional athletes since the beginning of the debate a few weeks ago. 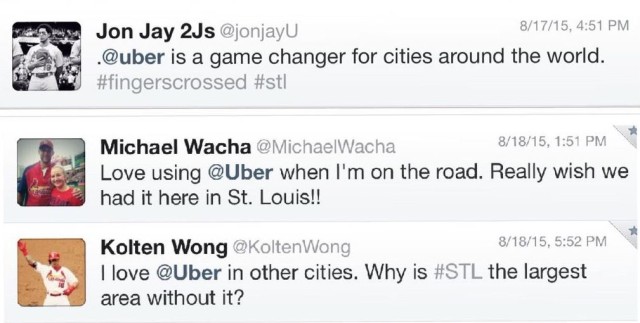 Tuesday, August 18: St. Louis Metropolitan Taxicab Commission member and proprietor of restaurant chain Pi Pizza Chris Sommers also took to Twitter, asking if it is a “coincidence” that the “MTC’s lobbyist”, government consultant and association management firm John Bardgett & Associates, is a “huge donor” of St. Louis County Executive Steve Stenger. On its website, Bardgett lists the MTC as one of its clients. According to AccessMissouri.org, Stenger received $2,551,610.43 in donations in 2014, almost ten times the previous year’s number. Sommers also tweeted four other “updates on UberX status in STL” on Tuesday, three about Stenger and one about St. Louis’ mayor Francis Slay. Per state law, the Mayor and the County Executive appoint the members of the MTC.

5/ Any coincidence that the MTC’s lobbyist is a huge donor to @StengerSTLCo?

Wednesday, August 19: Sommers announced on Facebook and Twitter that representatives from Uber, the MTC as well as Stenger’s and Slay’s offices are meeting to “discuss SENSIBLE code changes drafted by Mayor Slay’s team” and urged to remind Stenger via email that the mayor’s draft is “based on code from the the great majority of cities across the country.” Quoting Sommer’s Facebook post, The St. Louis Business Journal published an article at noon about the meeting without citing a source. None of the involved parties of the meeting has since released a public statement.

Thursday, August 20: About 30 interested St. Louisans attended the Ferguson Commission’s discussion about UberX at Venture Cafe St. Louis. Moderated by the commission’s communications director Nicole Hudson, the lively discussion also veered into issues concerning Ferguson, race and poverty (watch the first 30 minutes on Periscope). Edward Domain, who helped launch satirical app Goober (read EQ’s story on it here), said at the event: “The supporters of ridesharing are now preparing to take massive action. If our leaders don’t get ridesharing here, they are going to hear from an army soon.”

Thursday/Friday, August 20/21: The St. Louis Post-Dispatch and the St. Louis Business Journal reported that MTC commissioner Chris Sommers wrote a letter to the Federal Trade Commission, complaining about the MTC’s anti-ridesharing behavior: “The MTC is a local regulatory body dominated by the incumbent taxi industry, with state law establishing four of the eight members to be taxi company owners or drivers.” Sommers continued: the MTC has “long thwarted ride-sharing services from launching in St. Louis.” According to the Post-Dispatch, the chairman of the MTC, Lou Hamilton, said the MTC intends to apply the “same standards to traditional taxicabs as to ride-sharing companies such as Uber” and is not “anti-competitive,” reacting to Sommer’s allegations of signs of “anti-competitive behavior” in his letter, which dated Monday.

That’s it for this week from EQ about the Great Ridesharing Debate in St. Louis. Keep an eye out for the next update and let us know if we missed something pertinent or if you have any leads or developments we should include in future updates.