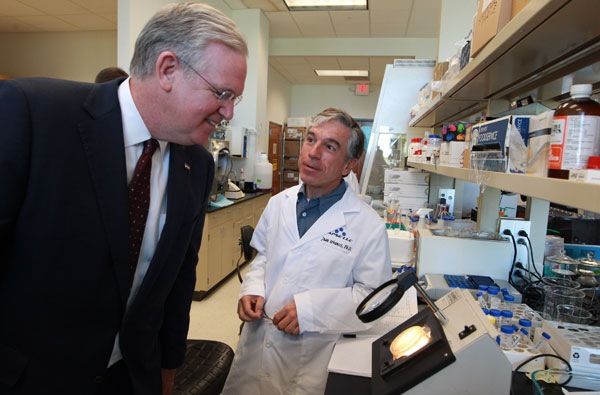 Any entrepreneur can attest that the obstacles positioned between a brilliant idea and a successful, growing business are many. To startup founders working in the BioTech or life sciences field specifically, those roadblocks can be downright discouraging.

But since 2003, St. Louis has had a team of people working to make that process easier: BioGenerator.

Part of BioSTL, BioGenerator is a non-profit that invests in early-stage and seed-stage life science startups in the St. Louis region, creates infrastructure vital for the success of these companies—think lab space and all of that expensive equipment—and maintains a stable of professionals to advise and offer assistance both in scientific matters as well as general business acumen.

“Overall, we’re trying to jumpstart the life science landscape here in St. Louis,” says BioGenerator president Eric Gulve. “Specifically, over the past six years or so, we’ve developed a suite of programs and activities intended to provide support for life science startups.”

Those programs and activities encompass a wide range of stages, from early meetings with a scientist or professional who has an idea to supporting life science startups with the syndication of a major venture round. One thing all BioGenerator portfolio companies have in common is that they deal with health and plant sciences, including agriculture, diagnostics, IT, medical devices, research tools and therapeutics.

Brad Postier is co-founder of Spectrum Perception, one of the most recent startups to join the portfolio. Spectrum Perception has developed a line of hand-held spectrophotometers—an instrument that is used to measure intensity of light in a part of the spectrum, especially when it is transmitted or emitted by particular substances—that are wireless, inexpensive and integrated into a micropipette.

The idea is that the tool they created would be able to be used in the field, in the lab or integrated into production processes at a lower cost with higher efficiency than traditional spectrophotometers.

Postier and his team first learned of the non-profit after he and his company made it to the finals of a Balsa pitch event. He got in touch with BioGenerator after the event, but admits they weren’t quite ready for that step.

Fortunately, the robust entrepreneurial ecosystem in St. Louis had the perfect stepping stone in the form of Square One. Spectrum Perception was accepted into CET’s signature program, and once they finished there, they were then ready to move forward, receiving a Proof of Concept Grant from BioGenerator in 2016.

“It was a roundabout way, but we proved we belonged through consistent hard work and advancement,” says Postier. “Not just in the science, but on the business side as well.”

Since joining the portfolio, Postier and his team have seen the benefits.

“Having access to the laboratory equipment and bench space has enabled us to work at a more efficient pace and at a lower cost, as we don’t have to buy expensive equipment,” he says. “[The] labs also offer us opportunities to openly collaborate with others, use of common equipment, bench space, darkroom, office space.”

“We are developing a laboratory research instrument. Many of the individuals working here are familiar with the headaches that this instrument solves and are eager to try it out. Since we have been here, we have moved past proof of concept into final design testing/optimization.”

APSE, an AgTech startup based in St. Louis, is an older BioGenerator portfolio company that developed technology allowing the cost efficient production of RNA for broad acre topical RNAi uses in agriculture. They achieved their laboratory goals in that area and are now proceeding to validate their production model by scaling up their processes.

Though current CEO John Kilmer wasn’t incredibly familiar with what BioGenerator was and what they did prior to joining his team (he was previously with Monsanto), he’s since seen the impact the non-profit can make.

“APSE would not have been able to progress as far as we have without their support, he says. “Investments as well as a remarkably well-equipped shared lab space.”

“But at least as important is the tremendous support that we get from the BioGenerator staff. They have held our hand through a number of refinancings, helped us get a grip on our intellectual property and provided guidance on finding investors.”

There is no one way that BioGenerator staff and mentors work to help make the path from concept to viable product/company easier for entrepreneurs. Whether it’s serving on boards of the portfolio companies, recruiting talent, (employees advisors consultants, service providers) serving as deal leads, providing mentorship and advice or even assisting in networking and making beneficial introductions, BioGenerator mission innately allows them to pitch in however they can.

“Every day we face a new set of challenges and opportunities, and the reward in working for an organization like BioGenerator comes from building partnerships and addressing complex situations where the end goal is to help members of the St. Louis startup community build strong companies that can provide solutions to important societal issues.”