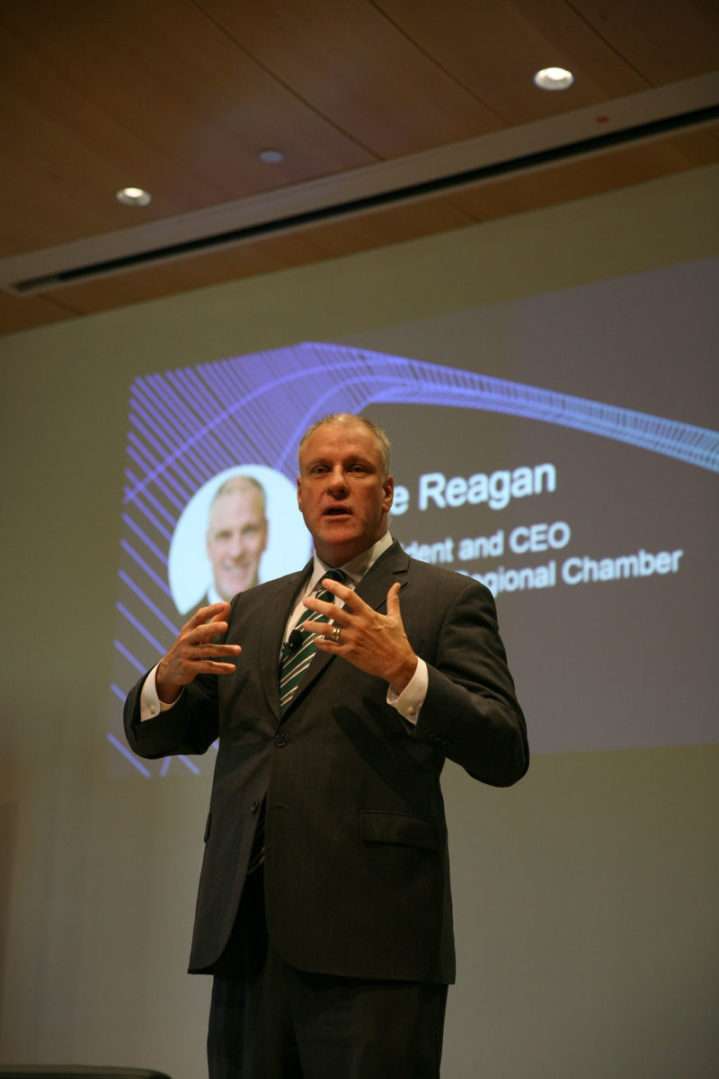 7 Ways The St. Louis Regional Chamber Is Continuing The Spirit Of St. Louis

It's not just the name of a plane.

The St. Louis Regional Chamber has a long history of fostering new endeavors. Take, for example, where the organization was when Charles Lindbergh took off on his pioneering flight: at his side, underwriting his adventure with a check for $25,000 (around $339,000 today).

The deal, according to St. Louis Regional Chamber President and CEO Joe Reagan? Call the plane the “Spirit of St. Louis.” It was a catchy name, but one that dug into what our fair city was —and still is— all about:

EQ sat down with Reagan to talk about where the chamber has been, where it’s going and how they plan to continue the mission to inspire the spirit of St. Louis.

1. They’re expanding the definition of what a chamber of commerce can be to the city.

Among their efforts is a “much more inclusive strategy that will get information to businesses to fund, run and grow their companies—whether it’s a freelance startup out of a home, a retail shop or a company that’s trying to scale to become global.”

2. Facilitating an urban renaissance is a top priority.

“What we want to look at are those things in our history that make St. Louis authentically special,” says Reagan.

“The most important aspect that we have discerned from [history] is the entrepreneurial, innovative, exploring spirit of St. Louis … that is what made us one of the most important cities and regions in the world. We are trying to help regain that spirit—the spirit is there, it’s who we are —but I think our success over time in the 20th century kind of got us lost in what was making us successful.”

3. They’re creating a movement that’s inclusive of all business owners—not just the big guys in town.

“[The St. Louis Regional Chamber] is a broad community of leaders who are united for economic prosperity,” explains Reagan, adding that it’s the largest and most diverse network and association in the region, including large businesses, minority-owned businesses, freelancers and startups.

“We believe that the world is shifting to this individual view that is much more micro-economic,” says Reagan.

It means that economies aren’t just developed around where big corporations are located, but where people—who now have more choice than ever in where they live, work and invest—choose to be. That’s where a strong community—economically and otherwise—is built.

“So when we look at our economic development strategy, it has to be focusing on: What is important to people? And, are we doing what we can to make STL a more attractive place for those people?” Reagan says.

“If we do that, the institutions follow. In other words, it’s not an either/or. It’s good for corporate-decision making; it’s good for the state government.”

In this spirit, the chamber’s entrepreneur-supporting efforts, led by Vice President of Entrepreneurship & Innovation Jason Hall, have committed $1 million in equity funding through professional accelerators (they were the first to invest in Prosper and SixThirty), and collaborate with 60 organizations under the Accelerate St. Louis umbrella, “a collective-impact effort to get our community to the next level of venture formation and entrepreneurship,” says Reagan.

4. Another goal is to ensure St. Louis ranks in the top 10 of educated American cities by 2025.

The region is currently 19th in population size and 14th in percent of working adults with a bachelor’s degree or higher. “Which means,” Reagan adds, “that we need to attract and retain about 75,000 more people than we are currently projected to have by the year 2025 to get into the top 10.”

5. These chamber programs are providing pathways for groups (from interns to veterans) to advance their professional education.

One pathway focuses on retaining students who attend school here by seeking their input and perceptions of St. Louis and focusing on changeable improvements. For interns, there’s the STL “I” Experience, “which gives them a more community experience while they are here, getting them together socially and for service projects that get them out into Forest Park and into different activities together,” says Reagan.

For the 400,000 working adults in the region just shy of their college degrees, there are Degrees That Work. “This a best-practices program so that employers can really support the people who work for them and reach a goal of achieving a college degree,” says Reagan.

For those who are unemployed, the Regional Chamber is teaming up with LaunchCode to teach them coding, which can fulfill a critical need in the booming tech sector and get them a good salary. And, in a pathway for veterans, the Regional Chamber is working to connect them with opportunities with employers and universities that are ready and willing to help them and the special needs they may have in order to transfer their military skills into the civilian world.

6. Inclusion —not simply diversity— is a St. Louis Regional Chamber priority that will amplify the effects of an educated population.

“There isn’t anything we are dealing with in our community that can be solved by one segment of our community,” says Reagan.

“This is an inclusive and collaborative organization and we are truly working to inspire a greater St. Louis. We want our actions to be bold and relevant and ignite other people to take action.”

While minority-owned and women-owned businesses have always been part of the Regional Chamber’s vision for a greater St. Louis, one strong program to incorporate more talent into the region is entering its 10th year: the Fellows Program.

7. The end result: A greater St. Louis will be a product of everyone living, working and owning a business in the city and region.

“We think about what our purpose is—and that is to inspire a greater St. Louis—so first and foremost we have to be committed to that,” says Reagan.

“We’re not a government agency; we don’t have a mandate from a piece of legislation that gives us authority to act on certain matters. If we’re going to be effective, we have to inspire people to come together and work toward a greater St. Louis.

“Our experience is that there is more that unites us than divides us in terms of that future vision. We want to be among the very best within our country in terms of prosperous regions for everybody: that this really is a region that would provide the kinds of hopes and dreams that people may have come here to pursue.”