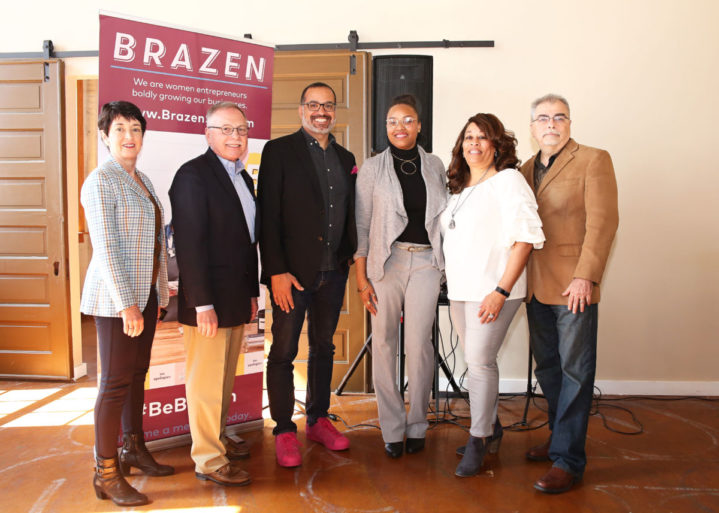 Shayba Muhammad of Mahnal Jewelry was named the winner of the Elevator Pitch Competition at the Brazen Be Seen Brunch. She received an award package that included a $2,500 cash prize, two 6-month memberships to the new CIC co-working space at 4220, one year of membership to the Hispanic Chamber, a business coaching session, and one year's membership to Brazen St. Louis.

People are often told that in order to be successful, one must put aside anything and everything that does not directly serve your creative endeavors. This may work for some, but Shayba Muhammad has learned that going against the natural ebb and flow of one’s life often causes more stress than is necessary to achieve.

“It’s important to remember that while we will always have ideas of how we think things should be,” Muhammad says, “things not going according to plan actually helps us grow.”

This resilience is one of her guiding principles that she incorporates into her personal life as well as her designer jewelry line, Mahnal.

The partially self-taught metalsmithing and jewelry designer began her career studying fashion design at the Institute of Art in Chicago, but found herself creatively unfulfilled, ultimately deciding to leave the program. She found a position as a visual merchandiser for a line of accessories, but shortly found herself tempting to spend all her money on the pieces she was to help sell.

Her desire to experiment, express herself creatively, and save money, she began creating pieces for herself. “People started to compliment [my work], so I made custom orders for a while, which eventually lead to Mahnal.”

The name means ‘attainment, achievement, and success’ — all of which she quickly began to find.

Mahnal is a line of individually designed brass jewelry pieces hand crafted by Muhammad herself. Each piece is meant to “complement the wearer, not overpower either her outfit or her essence.”

Brass is a long lasting metal known for its beautiful sheen and ability to retain its natural beauty over time. “I wanted to create pieces that could be dressed up or down as simple and elegant statement pieces that could transcend trends,” she says.

After being fired unexpectedly from her visual merchandising position, Muhammad moved back home to Saint Louis to live with her grandmother.

Soon after, she lost her father, who was an important source of strength for her. Enjoying his support, Muhammad was able to create freely and take classes to hone her skills. “He always encouraged my creativity and reminded me to have faith in myself and the things I wanted to accomplish,” she says.

But with his passing, she closed her existing Etsy shop, and put in the “introspective work” needed to rebrand her line. She also soon gave birth to her son which caused her to put her creativity on hold, yet longer, to be a new mother.

Significant life-changing events bring many people to cast their creative endeavors aside completely, Muhammad gradually resumed her work and fully embraced the added complications. Where in the past she would have rushed processes she found unappealing or procrastinated in submitting a finished project, she has now honed a profound respect for time.

“It is important to stop and live your life; it isn’t as if it is going to stop happening around you,” she says. “Allowing yourself the time you need to do what you must do is key to creating a balance between your ambitions and responsibilities.”

When asked what to define her perspectives on entrepreneurship, Muhammad responded both emphatically and without hesitation: “making a positive impact on your community.”

She believes that innovation and creativity fuel society, and should be encouraged as legitimate pathways to empowerment, especially amongst the youth and groups who often find themselves barred from success.

“Not only are you able to express the emotions within you, but you are able to take complete ownership over your success,” she says. It is important that businesses help provide resources and guidance to others, which she believes will help strengthen the bonds of community that are often weakened both internally and externally.

Muhammad often finds herself hearing much of the negative talk often familiar to creators, but she takes it in stride. “As a person who has not completed the traditional route, I feel like I have something to prove, both to myself and those people.”

This came in to play significantly during her preparation for the Brazen Global’s Be Seen pitch competition in March. As one of five finalists, Muhammad felt she needed to bring her absolute best in order to win.

She diligently researched how to create a well-rounded pitch by watching YouTube videos of pitch competitions and, “many hours of Shark Tank.” Regardless of the outcome, she says that creating a good pitch also helped her redefine Mahnal as a brand as well as how she wanted it to evolve in the future.

“I was surrounded by other women who were much more eloquent than I was, so I was shocked when I won!” she recalls. She feels that her diligent research and practicing led to her success, and the judges agreed.

The event drew more than 100 people to DK Annex, featured keynote speaker Rica Elysee, founder & CEO of BeautyLynk, as well as break-out sessions and mentoring opportunities by subject matter experts in the St. Louis entrepreneurship community. The event culminated with an elevator pitch competition with five entrepreneurs, reviewed by a blue-ribbon panel of judges from the St. Louis investment community.

Competitors were rated on their ability to “introduce herself and her unique experience, articulate her problem and how her solution will solve the problem, and ask for the resources she needed to succeed.” Mindy Mazur, [title], shared the judges’ assessment of Muhammad’s skill at “establishing credibility of where she is now, and [having] a strong ‘ask’.”

Muhammad is excited about the future of her business, and is grateful she is able to create and grow in Saint Louis. She was first exposed to the numerous and varied opportunities to share creative work in Chicago, but her hometown presents a different and more appealing draw. She finds that here she is able to strike a balance of living life at a slow and comfortable place while still having the resources to grow creatively.

“[Saint Louis] is small enough to make an impact, but no so large that the market is oversaturated. We are unique in that we force our creators to truly define themselves but allow them opportunities to thrive as a result of their efforts. I know what avenue I’m on here, and I don’t plan on moving anywhere else.”