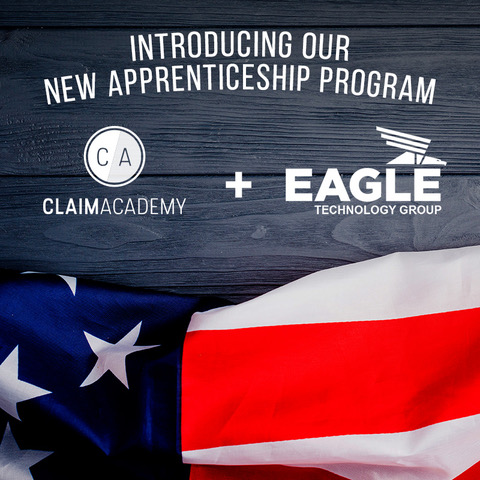 Claim Academy, the software developer bootcamp in St. Louis that partnered with Facebook earlier this year, has announced the launch of their first apprenticeship program. A new partnership with Eagle Technology Group encourages veterans and their spouses to apply for apprenticeship training that will launch them directly into an entry-level role in IT or software development at Eagle TG.

Accepted candidates will start by training at Claim Academy in Downtown St. Louis, where they will spend 12 weeks in an accelerated coding training cohort, learning how to code using Java or C#/.NET languages.

Although anyone may apply for the opportunity, this apprenticeship was born out of a goal to help retired military transition from military to civilian life. Claim Academy’s program is approved and sanctioned by the State of Missouri Department of Apprenticeship as well as the U.S Department of Labor, and presents a groundbreaking opportunity for veterans to start a civilian career in technology, while filling a vital skills shortage at a local level.

The demand for local tech talent grows stronger every day. Many veterans are interested in joining one of the regions fastest-growing sectors: software development and information technology.

Approximately 250,000 veterans exit service annually, and of the 17,000 veterans currently living in St. Louis, many of them struggle to find rewarding work that allows them to engage the skill sets they developed during time in service. For veterans transitioning into civilian life with their families, a career in software development could provide the stability, flexibility and high earning potential they’re looking for in a job.

Ryan Nettemeier, a Principal Engineer at Eagle TG, notes that veterans in particular have a certain skill set and ability to communicate that is much needed on teams like his. “Veterans possess many of the traits we look for and expect within our teams,” he notes. “We pride ourselves on the talent, experience, domain knowledge, and the drive of our people to be the best they can be.”

It’s clear that as technology advances, companies must evolve their workforce to focus on maintaining data integrity, improving website performance, developing web-based products or mobile apps, and so much more — all in an effort to stay relevant and competitive in their industries.

Employers across America have identified that veterans make great coders and even better team members. Eagle TG is no exception.

“Eagle has always focused on hiring veterans,” Ray Gluck, Director of Program Management, notes. “About 60% of our team members are veterans.”

Ray and his team have worked hand-in-hand with Claim Academy in the past to find — and hire — veterans who can code. “One [graduate] in particular, Colburn Sanders, immediately contributed to two critical high-value projects,” Gluck recalls, “and he continues to make significant contributions today as a valued team member. We’re excited about Claim’s new veteran program and look forward to bringing more veterans onto our team this summer.”

Once they complete the required training at Claim, the trainees will start immediately in an entry-level role on the IT or software development team at Eagle TG.

From Military Bootcamp to Coding Bootcamp

Claim calls their cohort a “bootcamp” for a reason; the training is quite rigorous. All students attending Claim Academy must be prepared to work long, hard hours — up to 50 hours per week.

During the training at Claim Academy, all students (civilian or military) will produce a capstone project, which is typically a software application or website, to add to their professional portfolio.

“I don’t think most people realize what the commitment is for these individuals to attend a Claim Academy Cohort,” says Nettemeier. “These students are hungry, eager, and passionate. So we believe Claim’s bootcamps and Eagle’s team atmosphere will challenge, develop and help these individuals reach their personal goals. ”

Claim Academy Founder, Ola Ayeni, is excited at the prospect of assisting veterans in their search for a civilian career and confident in the training program’s job placement rates.

“After working with several veterans,’ he says, “we believe our U.S Department of Labor sanctioned apprenticeship program will allow us to help our men and women in uniform into high paying careers in technology.”

Since opening their doors in 2014, Claim Academy has been perfecting their two core bootcamp cohorts, Full-Stack Java and Full-Stack C#/.NET with a 95% success rate of placing students in jobs. Although these two programming languages are used for very different things, Eagle TG uses both.

That means that people applying for this apprenticeship may choose which language they’d like to learn.