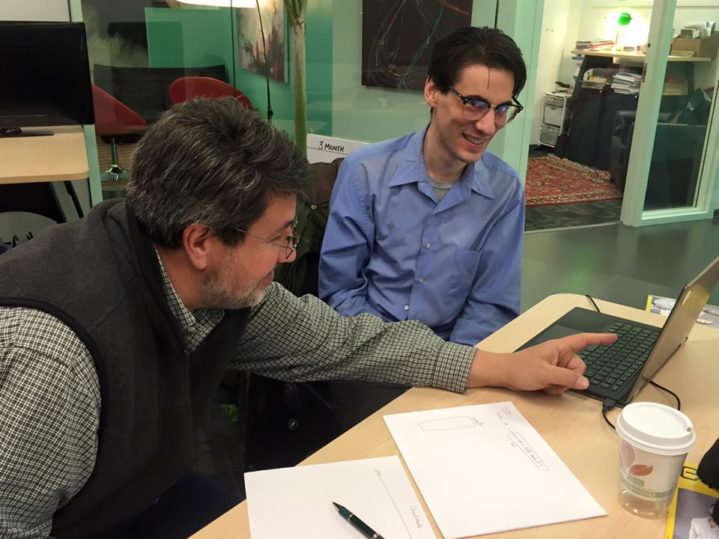 Dr. Renato Cataldo is Capital Innovators’ longest-tenured mentor. Leveraging his 30 years of experience in the medical industry, Cataldo has spent more than 4,000 hours guiding startups through all the trials of founding and running a company.

He’s grown four companies from startup to sale in the last 15 years and he also founded and currently runs CrazyForEducation, a company that develops online teaching software and educational tools for schools, teachers, students and professionals.

When MedSocket entered the Capital Innovators program, Cataldo took them under his wing. Sensing a need to make a change in strategy, the longtime mentor engineered the company’s pivot and eventually joined the company as CEO.

EQ sat down with him to talk about how it happened and why it makes Capital Innovators such a unique program.

How did the transition from Mentor to C-Suite happen with MedSocket?

I basically told the company the first week I thought they should pivot, because the product they had for sale and the way they were selling it wasn’t going to work, in my opinion. Their original model was that they would produce a product that would integrate with hospital medical systems.

They would then have advertising in that software for physicians and they would make their money based on per click or per view of that advertising. That’s what they came in with and what I said was, ‘no physician and no hospital in the U.S., in my 30 years of experience, would ever allow that.’

With the pivot, we had to change the way we did the software. No more advertising, we have to take that out. And we have to get a pharmaceutical company to pay us to distribute this software for free. It’s a very different model.

Realizing the operating capital was running low, the company bought in and Cataldo began the shift.

What did that pivot look like and how did you guide them through that?

In the 12 weeks we had, our goal was to make this modification of the software and marketing and find a pharmaceutical company partner that would be interested. So we basically, within the 12-week time period, got a company interested in it and shortly thereafter signed a deal with them to go into two hospitals for $400-500,000.

It would have made way more money to give it away in this model than it ever would have made in advertising. Cash flow was a challenge. Pharmaceutical companies only pay you when you do something and even when they do, it’s 60 days in arrears.

So to get enough cash flow to handle the rest of it, for six months I was sort of a volunteer mentor but we put my name on the company as president. I’m not on the payroll, I have no stock, but we stuck my name on there.

Then we went back to the original investors and said, ‘If I participate in the company, would you be willing to double down on your investment?’ I’d say 90 percent of the investors said yes, and some did more than double down. That gave us enough cash flow to continue to pursue the pharmaceutical company and get the first product going.

How valuable is that symbiosis for mentors and startups? Is part of the draw for mentors the opportunity to stick with companies in C-suite roles?

Oftentimes with these companies, they do well in the CI program, but then once you release them, it’s kind of like releasing a baby bird out of the nest. Sometimes they fly and sometimes they struggle to fly.

We can partner with them not only as mentors, but as other senior-type people who are willing to come on board at a reasonable rate and show their value. In the worst case, it increases the value of the startup to begin with.

I think it makes Capital Innovators incredibly unique compared to the other programs out there. My impression is [in other programs] there are mentors where you meet once a week, but the people we have in St. Louis are willing to do deep dives into the companies.

We’re not doing lip service once a week, we’re able to figure out exactly what this company needs and why.

Is that eagerness a product of regional pride? Or is it built into the model?

My philosophy is either you go big or go home. Judy [Sindecuse] definitely wants to go big. She wants all these companies to succeed and you can’t do that from a once-a-week, two-hour meeting.

It’s just not going to happen. All the mentors we have, or have had in the past, maybe because they are St. Louisans or maybe it’s where they’re at [professionally], they are willing to do that.

Is that because the ecosystem here is less populated at this point than on the coasts?

Let’s grow it here, let’s build it here, let’s make everyone successful in the whole ecosystem. If you believe that, you’re willing to dedicate some time.

That dedication has to be a huge draw to the program for founders.

It’s not like once a company goes beyond the 12-week time period the mentors are losing track with them. I just had one of my mentee companies from 2-3 classes ago show up at my door this morning.

They’re all welcome to do that if they want some help. You can give people money.

There are a lot of investments that are wasted just by giving people money. Ultimately, we have to get these products off the ground.