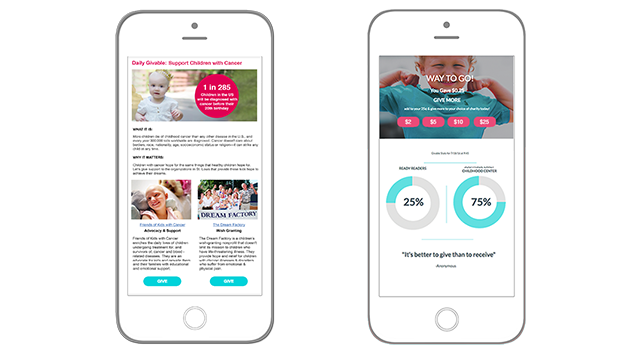 Givable Aims to Inspire a New Generation of Donors

For just 25 cents per day and the click of a button, you can start making a big difference in the lives of St. Louisans. Here's how Givable, a startup non-profit launched earlier this year, is inspiring a new generation of donors with crowdsource philanthropy platform.

For just 25 cents per day and the click of a button, you can start making a big difference in the lives of St. Louisans. This idea may not seem grandiose; that is, until your quarter mixes with quarters from thousands of other users to create a sizable donation to local charities.

And, you don’t even have to go any further than your inbox.Givable, a new platform for philanthropic giving, launched in St. Louis earlier this year. For just $8 per month, users can donate to a different charity every day.

Users receive an email each week-day morning featuring two local nonprofit organizations to choose from, complete with information about each not-for-profit and the impact it has on the community. Their pick of the day will receive 25 cents.

This may seem like a small donation, but the crowdsourced fundraising adds up. Givable aims to make philanthropy easy, fun and interactive for a new generation of donors.

Michael Staenberg of the Staenberg Family Foundation co-founded Givable with Kathy Osborn of the Regional Business Council and Brian Matthews of Cultivation Capital after discovering a similar platform in another market and becoming excited about the possibility of bringing it to St. Louis.

“Givable makes donating fun and interesting for those who crave digital engagement,” Staenberg says. “The platform also appeals to those looking to make giving back part of their daily routine.”

Staenberg, a philanthropist active in the St. Louis charitable community, recognized the chance to inspire younger donors in the region.

“We have tremendous support from the community. People are so energized by this idea, allowing us to reach a new generation who loves to engage with technology” says Elise Hastings, Executive Director and the creative mastermind behind the design of the platform built by Chris DeGroat, Chief Developer of Givable.

Givable works with businesses to engage their employees in the community through the daily platform.

“Givable is a grassroots philanthropic business model that allows employees to take control of how they want to support local impact,” said Brian Matthews, Managing Partner of Cultivation Capital. By sponsoring their team members on the platform, companies can provide a benefit to their employees while also empowering them to determine how they wish to direct their 25 cents each day.

Nonprofits have the opportunity to get featured on Givable by filling out a form on Givable’s website. After a vetting process, 520 active, local nonprofit organizations representing areas such as art, education, environment, animals and more will be featured on the platform.

To see which charity aligns more with their interests, users have the opportunity to click through and learn more.  “When you have to choose, you look into the charity, get to know it more and get involved in the giving,” says Hastings. “The nature of choice gives more attachment to the cause itself.”

The user interface features a dashboard to track donations and display lifetime giving totals broken down by category. Users can also skip days of giving if the charities don’t speak to them, give more to causes that do and learn about volunteer opportunities.

“Givable empowers the next generation to affect local change by providing a tool that speaks their language,” said Kathy Osborn, CEO and President of the Regional Business Council, a consortium of the Presidents and CEOs of 100 of the region’s largest mid-cap companies focused on the betterment of the St. Louis region. “This enables our next generation of philanthropists to be part of the conversation now.”

To enhance daily monetary giving, Giveable also sends users a monthly report that features more ways to get involved in the community. The idea is to build a greater community of givers connected to the St. Louis region by forming a network of volunteers.

Beyond giving donations, Givable is helping to energize people wanting to make a difference in St. Louis. “As a person who wishes [she] had more time to give back to [her] community, Givable is a no-brainer,” says user Kathleen Bauer.

“My daily donation barely affects my wallet, but if I’d like to give more, that option is super easy. All the charities Givable features daily are more than worthy of the spotlight!”