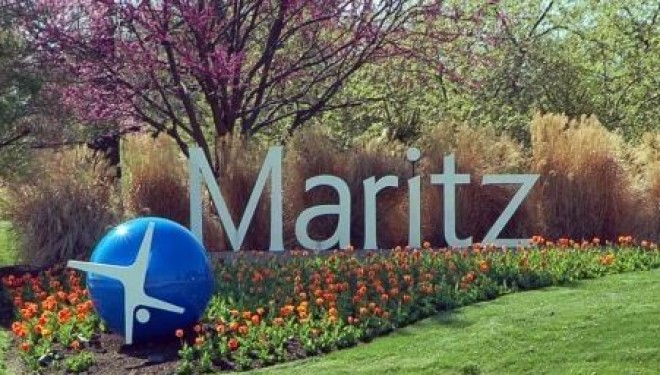 From its start inside a South City home to its creation of the incentives industry, we take a look at the innovative DNA of one of St. Louis' largest private companies.

Maritz­, the largest source of integrated performance improvement, travel and market research services in the world, sponsored the first Innovation By Design Summit (IxDS) this past September at Union Station.

Though Maritz had produced this in previous years as a signature event for its employees, this was the first year the company offered it to the entire St. Louis innovation community.

Tracie Gildehaus senior director of insights and innovation at The Maritz Institute, a division of Maritz, founded in 2009 to leverage human behavioral research—conceived of and organized the event for the ultimate purpose of contributing to the booming innovation scene in St. Louis.

“Our organization is constantly reimagining and reinventing itself,” she says. “We wanted to share what we’ve learned from our long history of innovation with the entire innovation scene here in St. Louis.”

What inspires a 123-year-old company like Maritz to take a leadership role in the region in terms of corporate innovation? Throughout its history, Maritz has adapted to unforeseen and sudden challenges with fresh approaches.

Edward F. Maritz opened E. Maritz Jewelry Manufacturing Company out of his home at 3223 Magnolia Avenue in St. Louis’ Tower Grove East neighborhood in 1894. Having apprenticed and worked for jewelers in California, Kansas City and St. Louis prior to opening his own company, Maritz had accumulated enough experience to run his own business.

Once he did hang his own shingle, Maritz found success as a wholesaler, importer, manufacturer, setter and engraver of jewelry and fine watches for retail jewelers first in Kansas City and then in St. Louis.

Later, the company branched out to focus on the growing popularity of wristwatches, worn first by WWI officers and pilots for synchronizing attacks. Maritz opened sales offices in Chicago, Cleveland, Detroit and Los Angeles. According to Ester Horstmann, hired in 1920, working for E. Maritz Jewelry Manufacturing Company required an innovative and entrepreneurial spirit not unlike the dedication required by today’s entrepreneurs.

In the book, “A Centennial History of Maritz Inc.,” she described her work at the time:
“I did anything that had to be done…wound watches, sewed ribbons on watches, listed incoming jobs for the shop, did the billing, made up sample cases for salesmen to take on the road, and did bookkeeping and secretarial and stock work. There were only eight employees, and we pitched in wherever we were needed.”

Edward Maritz died in 1929, the same year as the financial crash and the beginning of the Great Depression. Edward Maritz’s sons James and Lloyd took over the family business and, like many companies at the time, Maritz struggled and nearly failed.

Dennis Hummel, current President of Maritz Holdings, believes those hard times resulted in the first major pivot for Maritz. “They had an inventory of watches and jewelry for which they didn’t have buyers,” he says.

“At the same time, businesses that were still in business and healthy were looking to reward employees in ways that weren’t necessarily salary-based, because salaries couldn’t increase at the time.”

The result was the creation of Maritz Sales Builders in 1930, a new division of the watch and jewelry company that, Hummel says, “began offering watches and jewelry for years of service, reward and recognition in lieu of cash. That really was the birth of modern-day Maritz.” Customers of Maritz Sales Builders throughout the 1930s included Caradine Hat Company, Chevrolet, Shell Oil and Ralston Purina.

After WWII, the incentives business that had saved the company during the depression went on to pay huge dividends over future decades, including the sale of $2.5M in incentives merchandise to Chevrolet in 1948. The sheer volume of merchandise required Maritz to rent the Annex of the St. Louis Arena for storage.

This substantial account provided a platform on which Maritz continued to innovate and expand into new industries—first selling travel incentives to companies in the 1950s as the pleasure travel industry expanded, then human behavior research.

Hummel says, “In serving the auto industry, our customers started to ask us about behaviors of car buyers, and they really wanted to know more about those behaviors. If you buy a car today, there a 60-70% chance that research on your experience at the dealership is coming through us. You may not know that–it will look like a survey from the auto manufacturer–but the tabulation and the reports are being done by our firm, which is now called Maritz CX, Customer Experience.”

According to Dennis Hummel, The Maritz Institute expands upon the fundamental belief put forward by Maslow and Skinner–and a cornerstone of the incentives industry–that human behavior is complex. Hummel said, “The Maritz Institute is a think tank that we have connected with academia, so we do a lot of work to understand ongoing research on human behavior, and how to apply that research to the business world.”

From within the Institute, Tracie Gildehaus’ role is to anticipate any future needs for the company to pivot. “My role is to have eyes on the world, centered around insights,” she says. “What will the world look like ten years out? What will Maritz look like? I provide insights on trends, focus on emerging businesses with whom we can collaborate and bring new horizons into view across any in-stream verticals specific to what we do today.”

Gildehaus says that Maritz’s culture of innovation today depends on three pillars. The first priority, she says is about, “being a catalyst for new ideas internally. We are very focused on building a culture of curiosity.”

“Internally we have our own version of a “Venture Café” [referring to the weekly Thursday evening events held at Cortex Innovation Community]. We have meetups where different business units share insights, what are they seeing happening in the market and to talk about new things from SEO to machine learning.”

Maritz’s second pillar of a culture of innovation is to listen to its customers in order to learn about gaps in the market and intersect with trends happening in the market.

Third, Maritz has prioritized working with entrepreneurs (through its partnership with Capital Innovators and other partners) as well as entrepreneurial service and funding providers such as Arch Grants and ITEN. Through these partnerships, Maritz exposes itself to other areas of insight and to thinking differently.

Plugging into the Startup Scene

Maritz began collaborating with Capital Innovators accelerator program in spring of 2016. Each year, the nationally-ranked accelerator program offers 10-12 tech startups $50,000 and the opportunity to work for 12 weeks on their company with the support of mentorship, networking and follow-on funding opportunities.

As part of the partnership, Maritz provides mentors from its staff for the purpose of not only providing seasoned experience to the startups, but also to expose staff to the mindset of entrepreneurs. Gildehaus says the decision to collaborate with Capital Innovators was based on a desire to take the pulse of business growth in St. Louis.

“We are very focused on going where the growth is. Being able to help accelerate entrepreneurship in St. Louis is very meaningful to us,” she says.

“It also demonstrates a deeper level of community engagement beyond funding. It allows us to nurture and attract top talent–there are multiple reasons.”

Bryan Phillips, a senior vice president of technology at Maritz Motivation Solutions, mentored startups as part of the collaboration. He believes the gain for Maritz employees is at least as valuable as the investment.

“One of the things that intrigued me about working with Capital Innovators was to be able to learn how they approach innovation in a startup world versus how we try to approach it in a corporate world,” he said. “Typically speaking, in the corporate world we’re way too slow. One of the things that you see with these accelerators is they get 12 weeks and that’s all they get.”

“xYou’ve got to make it happen and come out of there with exactly what your plan is and your vision in progress. And those things are a barrier sometimes in a corporate world. So we’re trying to figure out how we can be more like them–so that we can win fast or fail fast.”

Maritz mentors assist startups in the program with consultation on user experience design, security, architectural reviews, access to industry contacts, brand loyalty expertise, and even legal advice.  “One of the things that we’ve learned about startups in the accelerator is that very few of them go in and come out looking exactly the same,” says Phillips.

“There is a process that happens, the pivot, that’s been very interesting for us to watch because it helps us think about pivoting our business. We come up with a lot of great ideas and have a lot of great assets here at Maritz. But we don’t always think about ‘well gee, traditionally we have served all these markets, what happens if we flip that a little bit?’”

Phillips was surprised how much help even a short amount of time could be for the startups. “What I thought was going to be most challenging was the time [investment]. What we found out was that an hour of our time answering their specific questions is extremely beneficial to them.”

Brian Dixon, COO of Capital Innovators, confirms the value for the accelerator startups in working with Maritz Mentors. Dixon said, “They are providing unparalleled guidance and helping our companies drive the needle forward. Another great value add is that Maritz has keen insights into the cutting-edge technologies that our companies are developing, and if it makes sense for their organization, they can pilot these products and services.”

Whatever comes next for Maritz, it’s likely leadership will continue to rely on The Maritz Institute to inform and apply insights around the needs of the people it serves.

Hummel says, “I suspect that any business out there that’s been in business for 123 years would probably give you a similar answer, but I think the critical aspect of our adaptation has been as a result of our understanding that people are the most important part of any business. We are in the people business, so we’ve had to be very sensitive to and very familiar with and constantly have our focus on people.”