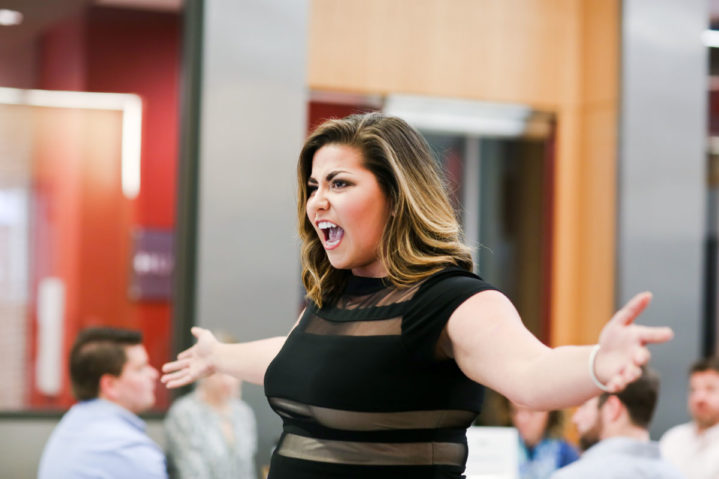 Opera Theatre St. Louis has been focused for most of its history on being an innovator when it comes to the work it puts on stage. Now it's focused on engaging the innovation community with special events.

From April 18 to April 23, Opera Theatre of St. Louis hosted a series of five “Opera Tastings” events across St. Louis to promote its 2017 season. The event series featured “music from across the history of opera paired with delicious food and drink crafted specially to complement the flavors of the music.”

The week culminated with an event at @4240 in the Cortex Innovation Community, featuring food prepared by Vicia restaurateurs Mike and Tara Gallina accompanying a program of opera favorites sung by Opera Theatre artists. 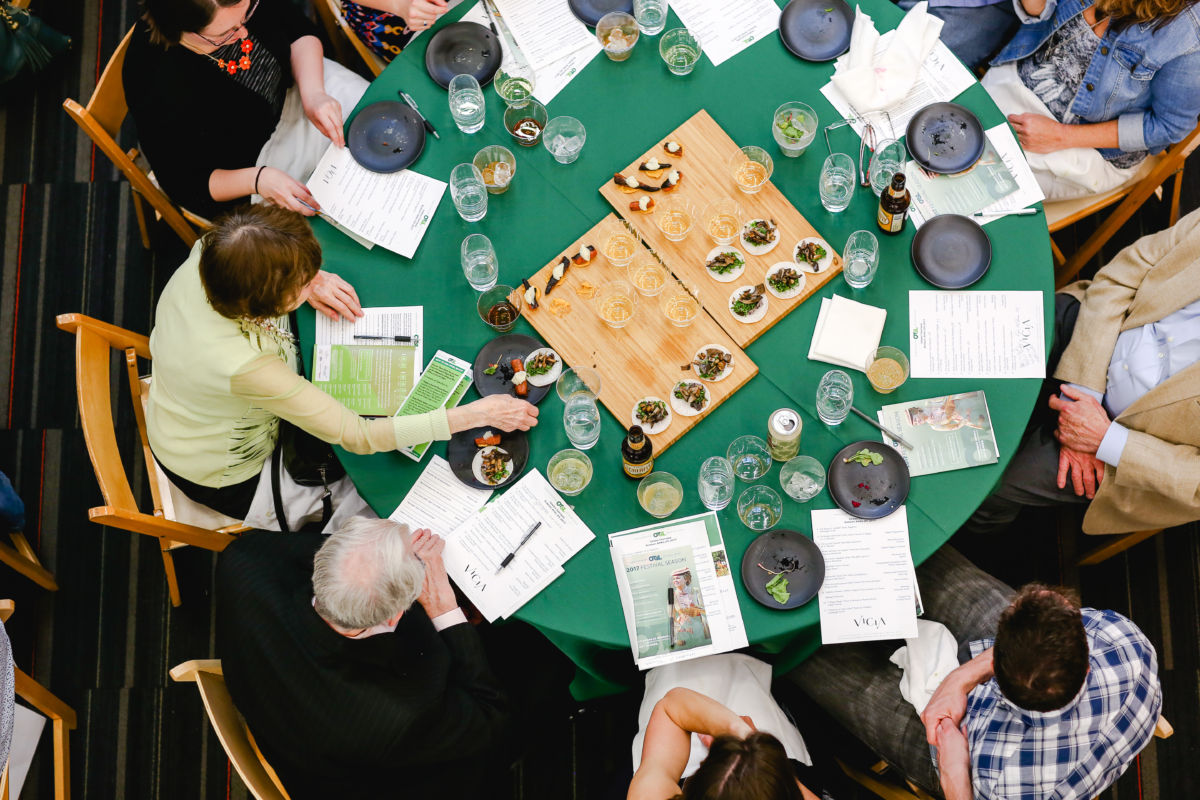 The tastings were the brainchild of OTSL Director of Marketing Joe Gfaller, who explained that while this was their third season hosting the events, an effort to introduce opera to new audiences, this was the first time holding one in the Cortex Innovation Community.

“We’ve been looking for a way to work with Cortex over the last couple of years,” says Gfaller. “With Vicia opening it was a perfect opportunity.”

The Gallinas worked out of @4240 as Rooster and Hen hosting pop-up dinners for about a year before the March opening of Vicia, a vegetable-focused, farm-to-table restaurant.

One of the drinks, a German “Riesling Kabinett Style” wine accompanied the aria “Lieben, Hassen, Hoffen, Zagen,” from Ariadne on Naxos by German composer Richard Strauss. 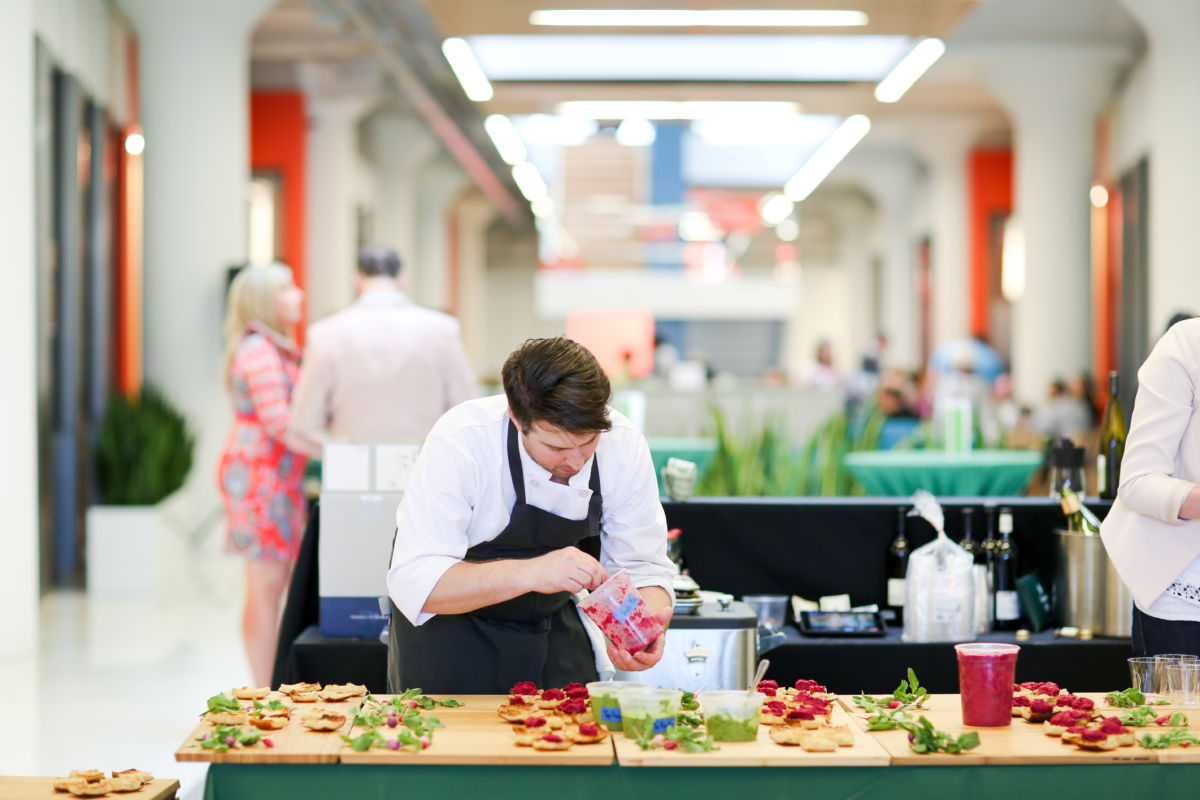 “One of our main goals is getting people to recognize how accessible opera is. At an event like this, we are meeting people where they are, and we’re pairing the music with something that is fun and a little bit different as a first point of entry.”

Working with Cortex has been in OTSL’s long-range plan for some time due to the arts organization’s parallel value to innovate.

“Cortex is incredibly important for anyone looking at moving whatever they are doing forward. OTSL has been focused for most of our history on being an innovator when it comes to the work we put on stage.”

“Every season we present American premieres and world premieres–brand new work that tells resonant contemporary stories and that pushes the art form of opera forward in the same way that I think a lot of the businesses and entrepreneurs that are a part of the Cortex community are looking to push their own industries forward. So, it’s a natural opportunity to connect with like-minded people in a space that’s a home for such incredible innovation, ideas and talent.”

The OTSL season, which begins May 20 with Giacomo Puccini’s Madame Butterfly, features two new works: a new version of the American opera The Grapes of Wrath by Ricky Ian Gordon & Michael Korie, based on John Steinbeck’s novel, and an American premiere of a new opera by Philip Glass called The Trial.

“Musical America called Grapes of Wrath the ‘Great American Opera’ when it was first produced in 2007,” says Gfaller.

“We worked with the composer and the librettist, so this new production is a streamlined telling of the story. What’s really innovative and exciting about the score is that, in addition to the St. Louis Symphony, who is always our orchestra, the opera features all these great Americana instruments: washboard, harmonica, fiddle, banjo. These are sounds you’re not used to hearing or expecting to hear in an opera.”

“The Trial is another great example of innovation at the opera. Philip Glass  is easily the best known living composer born in this country, and the opera is both musically engaging and musically innovative. It’s fascinating because it’s telling a story that was first written by Kafka a hundred years ago and it remains intensely resonant today as it looks at fairness and justice.”

In addition to Opera Tastings, this will be OTSL’s fourth year hosting a night of “Innovation at the Opera,” happening on May 26. On that evening, OTSL invites entrepreneurs and community leaders to attend one of the shows for a much-reduced price, which includes a networking cocktail buffet before the show.

“Since launching this program, we’ve started working with some of the entrepreneurs,” says Gfaller. Tallyfy, a business process management software company, attended Innovation at the Opera and an Opera Tasting last season and are now participants in the OTSL Young Friends group.

Gfaller says, “They are just the most wonderful people in the world, and we’ve been using their system to help with our program book, which is a massive 168-page document that requires multiple rounds of proofing from tons of sets of eyes. Tallyfy has helped us to streamline how we do what we do and to find a way to use a digital platform that is much more efficient.”

“In addition, we’ve had some great conversations with people at the CIC and VentureCafe about different ideas. We work on longer planning cycles than a lot of people do, so there’s a lot in the hopper.”