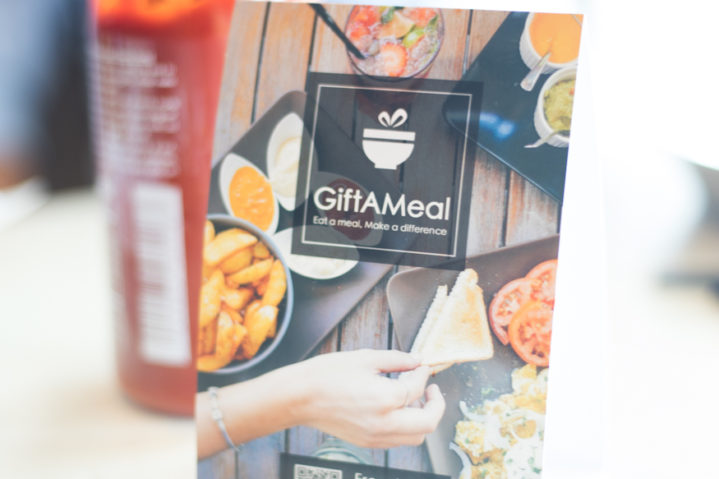 Andrew Glantz, the CEO and Founder of GiftAMeal, a recent graduate of Washington University has been on a roll in 2018.

In the last quarter of this year, Glantz’s for-profit, yet socially conscious app, GiftAMeal, has been showered in positive attention. Just within a few months, he’s gotten seed funding from angel investors, received a $50,000 Arch Grant, won the top award at the PitchForce competition, won the top two awards at Startup Connection and his company is revenue positive.

The mobile app provides users a simple way to support charity organizations while doing something many of us do all the time: snapping and sharing photos of our meals while dining out.

“GiftAMeal is a mobile app and each time someone takes a photo at a partner restaurant, we make a donation to Operation Food Search and give a meal to someone in need. From the business side, restaurants are paying us a monthly fee to be on the app as a marketing service,” Glantz says.

Like many entrepreneurs, Glantz was originally inspired through exposure to the entrepreneurial ecosystem at large.

In his case, the GiftAMeal idea came to him while participating in a 2014 internship with Navitas Capital, a Venture Capital firm out of Los Angeles. But it was in the more structured program provided by the Skandalaris Center at WashU and the Hatchery class hosted by Professor Cliff Holekamp that provided him with the guidance and direction needed to fine tune the idea, develop a business plan, and build up the networking and soft skills necessary to launch a successful startup.

But the GiftAMeal formula – ‘So crazy it just might work!’ – wasn’t always an easy sell.

“Investors like the social impact,” Glantz told EQ, ”but that isn’t what makes them invest. In the end, you have to show that the investment will pay off.”

The GiftAMeal concept represents an emerging trends around symbiosis in social entrepreneurship. GiftAMeal has a solid marketing-driven business model that harnesses the reach of mobile social networking by embracing existing user behavior, and transforming it into a unique and frictionless way to support charity and make a social impact.

GiftAMeal works with local organizations and food banks, so in a sense, it acts as a proxy, creating a value exchange for restaurants and their diners to donate to these charities indirectly.

“For those that have the privilege of dining out, we wanted to give them the ability to extend that privilege to do some good. The exchange is the cash equivalent of 1.2 pounds of food (one meal) for a photo taken on the app and then a second donation if a user shares their photo on Facebook or Instagram,” says Glantz.

The idea that restaurant promotion might dovetail with social impact isn’t new. One of the oldest models is Dining Out For Life, established in 1991 to help fund AIDS/HIV prevention and treatment. In that program, restaurants donated a percentage of their sales in return for a unique event that appealed to their diners through cause marketing. The program is still active with over 3000 restaurants and over $4.2 Million raised in 2017.

“I think the line between entrepreneurship and social entrepreneurship should and will become increasingly blurred. While GiftAMeal is a for-profit entity, we believe that profit and purpose aren’t inconsistent goals. You can see this with the rise of impact investments as well, in which investors seek profit, but in a socially responsible way that helps their community.”

Growing a Network of Participating Restaurants and Users 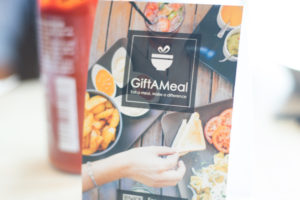 “Restaurant owners are part of the communities they do business in. And GiftAMeal is a way to provide restaurants an opportunity to scale a social impact, We’ve found that the restaurants that work with us do truly care about making an impact in their community,” Glantz says.

Enthusiastic restaurant partners are critical to GiftAMeal’s growth, since part of the distribution and usage of the app depends in part on restaurants promoting the service to their existing and prospective diners. GiftAMeal can help diners find a restaurant, but restaurants still need to help users find the app as well.

All Types of Restaurants Participate

“We’re working with fast food, fast casual and fine dining establishments,” he continued, “You can go to a fine dining restaurant like Gerard Craft’s Pastaria or Fort Taco which operates a drive-thru location in Brentwood. We recently had two Pieology locations join us so we’re starting to break into some of the restaurants chains. We’ve seen a lot of uptake from mom and pop restaurants and chains.”

A big part of their success in St. Louis is Andrew Glantz’s passionate and engaged business pitch. The restaurant community here is a tight-knit one, so the network has grown in part from introductions to Glantz from one restauranteur to another, but he also notes that most of the app users, apart from being loyal customers, know many restaurant owners personally and have made introductions.

“A lot of our growth is from our users. We got an introduction to James Pendagraft, CEO of Schlafly, for example and then he signed up both the Schlafly Bottleworks and Schlafly Tap Room locations, then he made us an introduction to Gerard Craft. We’ve even had one of our partner restaurant owners, John Perkins from Juniper go on Fox News and promote us. We didn’t even know about it beforehand or ask him to do it. It’s awesome to see a restaurant we work with become a brand advocate.”

GiftAMeal is expanding out of St. Louis as well. Glantz has signed up restaurants in Chicago and Detroit, and this year was able to hire a full-time sales person to help grow the network.

“It’s been an experiment for us to grow into different cities and markets, but we’ve had success so far in bringing value to our partner restaurants in other markets, so we’re actively planning to expand.”

Growth and the All Important ROI

Even with packages from only $49/month to $149/month, notoriously tight margins in the industry might detract participating restaurants from signing up.

In order to attract new participating restaurants, Glantz has to pitch a clear return on investment. To combat any skeptics and gather definitive data, the GiftAMeal team conducted an in-depth case study with local St. Louis favorite Rich and Charlie’s, which provided sales data over a seven month detail to correlate with app usage.

“Restaurants definitely want a return for their investment. We were able to segment this data between customers that used GiftAMeal and those that didn’t. The customers that used GiftAMeal were returning 45% more frequently, spent 24% per check on average (consistent month over month) and tip size increased by 14%.” Glantz’s enthusiasm for the data shines as he explains the insights from the study, adding, “What’s really cool about this is that it’s before and after behavior as well, so we are able to see a causal connection. This means the social impact incentive is even more valuable than a discount or a coupon.”

That latter comment is worth keeping in mind while assessing the St. Louis based startup’s proposition. Groupon had a $12.1 Billion IPO despite the fact that their model of driving local business through issuing massive discount coupons proved to be problematic to many local business owners in terms of ROI.

Building off this initial study, Glantz and the GiftAMeal team are partnering with researchers to further understand the effect of social giving incentives on customer behavior and sales.

Many of GiftAMeal’s Success Metrics Focus On Impact

The success of GiftAMeal shouldn’t exclusively judged by its user growth or ability to scale nationwide. With over 20,000 users (with monthly active users growing at 63% for the period between May and October) and 125 participating restaurants just in the St. Louis area, GiftAMeal has already made their mark on the community.

The social impact of the app has grown exponentially, from 30,000 provided meals from October 2015 to May 2017 to now reaching 201,364 meals provided to date to food banks in St. Louis, Chicago, and Detroit.

“200,000 meals is just the beginning,” says Glantz. “I envision a future where GiftAMeal puts a dent in the hunger problem both in St. Louis and nationwide, providing millions of meals to those in need annually, all while delivering a return on investment for restaurants.”