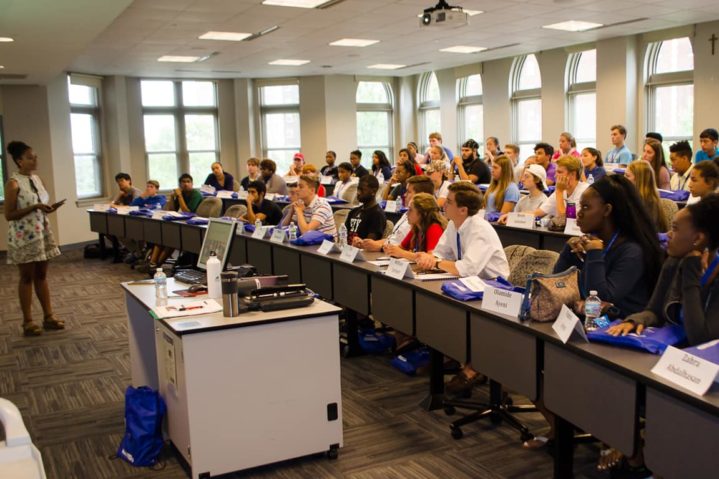 Entrepreneurship is not limited to any age, as evidenced by the successful high school programs hosted by Saint Louis University and its close partnership with international teen entrepreneurial programs such as Network for Teaching Entrepreneurship (NFTE, pronounced “nifty”) and Independent Youth.

Saint Louis University has been a leader in entrepreneurship education for almost five decades, helping college students hone their entrepreneurial ideas and build skills to create and support startup companies with both undergraduate and graduate degrees.

Building upon that strong foundation, the university wanted to extend its dedication to entrepreneurship and take its work beyond the walls of the university.

Thirty years ago, SLU’s Center for Entrepreneurship crafted a mission to connect “entrepreneurs before, during, and after college through education, mentoring, and networking to ‘Do Good, Do Well’”, and out of that mission came their high school programs.

“As a school that values investing in the St. Louis community and has a top 10 nationally ranked program, it only makes sense that we would create a program designed to engage the next generation of entrepreneurs,” says Laura Gardner, High School Program Coordinator at SLU’s Center for Entrepreneurship.

The high school program began in 2005 with the Allsup Summer Entrepreneurship Academy, a four-and-a-half-day summer program offering teens an opportunity to learn entrepreneurial concepts and principles and compete for cash prizes, with the goal of sparking a long-term interest in entrepreneurship.

The success of this academy and the national acclaim for its collegiate competition pipeline gave the Center for Entrepreneurship the idea to create a high school version of that pipeline called the “Idea to Action” program which includes the “Teen Idea Dash” pure idea competition, “Teen Escalator Pitch” elevator pitch competition and “Angels in the Outfield” investor pitch deck competition. Each competition is open to the nation’s best high school students.

In addition to the pipeline, SLU’s high school programs also partner with NFTE and Independent Youth to support their missions of connecting entrepreneurs before and after college.

NFTE’s mission is “to provide programs that inspire young people from under-resourced communities to stay in school, to recognize business opportunities and to plan for successful futures,” and they support that mission with programs around the world.

The St. Louis office of NFTE works with students in the Ferguson-Florissant, Jennings, Ritenour and Normandy school districts, along with Saint Louis Public Schools, with the goal of introducing more than 1,000 students per year to the entrepreneurial mindset.

As a SLU alumnus, Angela Lewis, Executive Director for NFTE in St. Louis, knows first-hand about the high-quality entrepreneurial programs at SLU and knows about the university’s dedication to supporting the community.

She states, “SLU has one of the best entrepreneurship programs in the country and we love that our students are able to have access to that. We know that we can have greater success when our students have access to opportunities that they may not have known existed.”

The other major organization that partners with SLU’s high school programs actually brought Lachlan Johnson, the first teen entrepreneur to be featured on ABC’s “Shark Tank,” to campus during TrepStart Day, in 2012.

TrepStart Day, also known as the Teen Entrepreneurship Symposium, is an event hosted by Independent Youth in several cities each year. They bring teen entrepreneurs together to teach and celebrate entrepreneurship with other teens.

Johnson’s first speaking engagement with Independent Youth was at SLU, and unbeknownst to her, Tim Hayden, Director of SLU’s Center for Entrepreneurship, attended her presentation and immediately started recruiting her to become a Billiken.

Johnson says, “I fell in love with the beautiful SLU campus and the incredibly entrepreneurial city of St. Louis, and returned home to North Carolina with my sights set on returning as soon as possible.”

As a speaker and session leader at TrepStart Day events from 2012-2015, Johnson “aged out” when she turned 20, but she still serves with Independent Youth, working to recruit new teen entrepreneurs and helping with their website and social media accounts.

Johnson works with Tanya Hamilton, Independent Youth’s Founder and Executive Director, to run other local programs such as the 30 Day Entrepreneurship Challenge and the Ferguson Youth Entrepreneurship Program. In addition, Johnson helps Hamilton with other international programs for Facebook, Twitter and Google.

While Johnson has traveled to many cities with Independent Youth, she says, “SLU’s TrepStart Day is always the largest and most fun.” SLU’s high school programs, including all of the competitions and partner events, introduce about 1,500 students per year to the campus and to the city.

Student entrepreneurs like Johnson, who hails from North Carolina, may have never considered SLU for their college careers. Now Johnson is hoping to make St. Louis a permanent home after she graduates this May.

The next generation of entrepreneurs will be looking to bring their innovative spirit to St. Louis as well. One Allsup Academy alum, Merima Velic, who is a high school entrepreneur ambassador and competition pipeline alum, will be heading to SLU in the fall.

Along with the support of students, community members also see the value of encouraging the creative minds of entrepreneurs.

Hamilton says, “As a result of the work Independent Youth and SLU have done together, we have been able to execute programs that positively contribute to the entrepreneurial ecosystem, educating budding and established teen entrepreneurs across the region.”