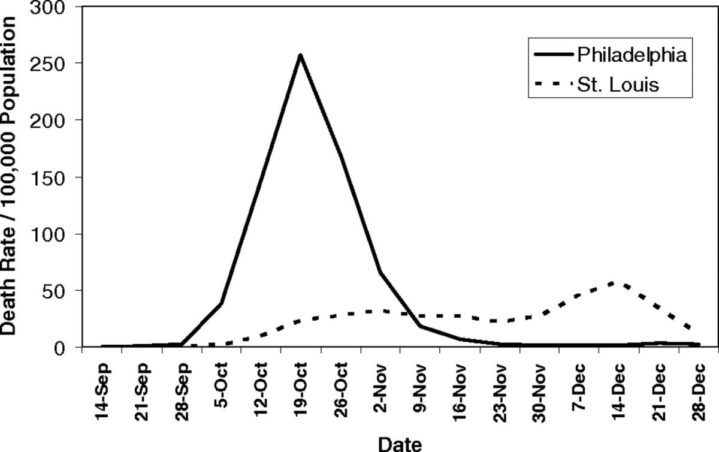 The lessons history has taught us on how cities should deal with a pandemic are based on the decisions made in St. Louis 100 years ago, during the Spanish Flu, the impact of which now inform public health policy on a global scale.

The Washington Post and Quartz have published stories based on data published over a decade ago that explains why the current public health policy of “social distancing” is so critical to enact now in cities all around the world. The most striking graph in the research compares the public health response time to the Spanish Flu pandemic in both Philadelphia and St. Louis to devastating effect: death rates per 100,000 citizens in Philadelphia were “three to five doubling times” than St. Louis.

In 2007 two research papers were published based on data that showed that the “Nonpharmaceutical intervention” policy of “social distancing” successfully reduced the intensity of the Spanish Flu pandemic of 1919. The first paper published in the Proceedings of the National Academy of Sciences showed that “public health response time” was critical to containing the severity of the disease, while the second paper published in JAMA shows that the duration of the quarantine also had an impact; with St. Louis, then the 4th largest city in the U.S., reporting the lowest death rate among the 10 largest cities in the nation.

To summarize the observations of the data comparison between Philadelphia and St. Louis, essentially there was a 14-day difference between the two cities in which the social distancing public health policies were enacted to stymie the spread of Spanish Flu. At its peak, the death rate in Phildelphia was 257 out of 100,000 people, whereas St. Louis, which enacted strict containment measures within 48 hours of the first case being reported, only suffered a peak of 31 people per 100,000.

Cases were reported in Philadelphia first, on September 17th, but it wasn’t until more than two weeks had passed, by October 3rd, that school closures, bans on public gatherings, and voluntary quarantine of infected households were introduced. Public health officials in St. Louis, on the other hand, acted within two days of the first cases reported on October 5th, such that by October 7th, according to the St. Louis Post-Dispatch, “city health commissioner Dr. Max C. Starkloff ordered the closure of schools, movie theaters, saloons, sporting events and other public gathering spots. Churches were told to suspend Sunday services. At the time, with nearly 800,000 residents, St. Louis was among the top 10 largest American cities.”

It’s important to note that St. Louis wasn’t necessarily more enlightened nor had more foresight than Philadelphia at this time. The city simply had more time to prepare as it had the geographical advantage of being further away from the major ports during The Great Migration that followed the end of the First World War when soldiers returned home.

That’s the very same advantage the city has now. This is why the response to coronavirus has been so forthright even though the number of cases can be counted on one hand, currently.

As the Post-Dispatch notes, “when a second wave of flu hit the U.S. the next fall, St. Louis had the advantage of planning for disaster as East Coast cities were struck first. By late September, Jefferson Barracks went under quarantine as the first soldiers came down with the flu.”

Quite Literally a Matter of Time

Unlike Philadelphia, when the first case of Spanish Flu was reported in St. Louis, public health officials did not need to be convinced that the effects of the pandemic could be severe because other cities had already enacted a nonpharmaceutical intervention.

By contrast, the people of Philadelphia endured two weeks of uncertainty and doubt in which, “authorities downplayed their significance and allowed large public gatherings, notably a city-wide parade on September 28, 1918, to continue.”

That parade became the chief spreader of Spanish Flu in Philadephia. However, the graph shows that the impact of the parade was not seen or felt until three weeks later and, worse, two weeks after the social distancing policy was enacted in Philadelphia.

Honestly, it’s rare to see such a vivid representation of what it means to be “too late.” Which makes the National Academy of Sciences report findings all the more striking.

Because when you compare it to the JAMA report, it’s quite clear that the cities that acted soonest suffered the least. And it’s clearer still that the cities that were hit the hardest had no possible early warning system or advantage, such as being landlocked (slower transit times) or geographically far from the first outbreak.

Put simply, as far as St. Louis was concerned, other cities were canaries in the coalmine.

A Stitch in Time Saves Nine

The JAMA report builds on the initial findings around “Public Health Response Time,” but expands the analysis to include data from 43 cities, and extends the discussion to compare the length of the period in which nonpharmaceutical interventions were in place. The paper highlights the differences between the coastal cities, New York City and Pittsburgh, versus the heartland cities, Denver and St. Louis.

The primary findings are that the longer cities maintained a comprehensive social distancing policy the less susceptible they were to a second wave of the virus (famously Spanish Flu was much more deadly when it struck the second time around).

Essentially the JAMA paper not only corroborates the findings of National Academy of Sciences that the reaction time of authorities was critical to containing the spread of the virus when it struck, but also emphasizes that social distancing actively held it at bay even after it had taken root. The cities that stopped social distancing too early saw death rates spike again from a second wave of the virus (when it has usually mutated and potentially become more deadly).

Which is important because over the entire period of Spanish Flu in the United States, while St. Louis’ death rate was significantly lower than Philadephia’s at its peak (8x lower to be exact), the cumulative death rate in St. Louis (347/100,000) was just half that of Philadelphia (719/100,000). That means the virus was still extremely deadly once it had taken root after nonpharmaceutical interventions were in place, and further underlines that there was a fundamental “opportunity cost” to government inaction.

Ghosts of the Past

What’s more, the JAMA data visualizations shed light on the anecdotal evidence that heartland cities had a geographical advantage to coastal cities. Yet, comparing graphs [B] and [D] starkly indicate that the advantages of location as an early warning system was only maintained by the cities that acted the quickest.

Sharing the same geographical advantages of being in America’s heartland, graph [B] shows that Denver’s Public Health Response Time was significantly longer at nine days, yet its first peak remains relatively similar and proportionate to St. Louis. However, the delayed response seems to be more deadly in Denver overall, as graph [D] shows a longer duration of nonpharmaceutical intervention with a much higher death rate.

Not only is the concept of “too late” stunningly illustrated again in this data, but the second comparison with Denver fundamentally dispels any naysayer that might suggest St. Louis was just lucky to be “in the right place.”

If history has anything to teach governments on how to manage a pandemic, these two reports combined show that being in the right place was actually only ever about being right on the timing.

It’s easy to get confused by contradictory statements from government departments and feel overwhelmed by round-the-clock media coverage, but the message from St. Louis’s ghosts of the past could not be simpler: flatten the curve.

Upon discovery of the first local case of a deadly virus, the sooner a city reacts by implementing nonpharmaceutical intervention policies (school closures, bans on public gatherings, voluntary quarantine of infected households and social distancing policies), the fewer people will die from the virus in future (and the less likely hospitals and healthcare system will be overwhelmed as has been happening in Italy).

So, if you found yourself foxholed indoors this weekend to #quarantineandchill, you could consider it in honor of #314day too (for readers who don’t live here, that’s ‘St. Louis day’ on March 14th).

Because these lessons that history has taught us —on flattening the contagion curve— are based on the decisions made in this city 100 years ago, the impact of which now inform public health policy in every modern city around the world.

Our #FlattenTheCurve graphic is now up on @Wikipedia with proper attribution & a CC-BY-SA licence. Please share far & wide and translate it into any language you can! Details in the thread below. #Covid_19 #COVID2019 #COVID19 #coronavirus Thanks to @XTOTL & @TheSpinoffTV pic.twitter.com/BQop7yWu1Q

Released on the same night that this EQ article was published, TV Show host of Last Week Tonight, John Oliver explains the importance of “flattening the curve.”