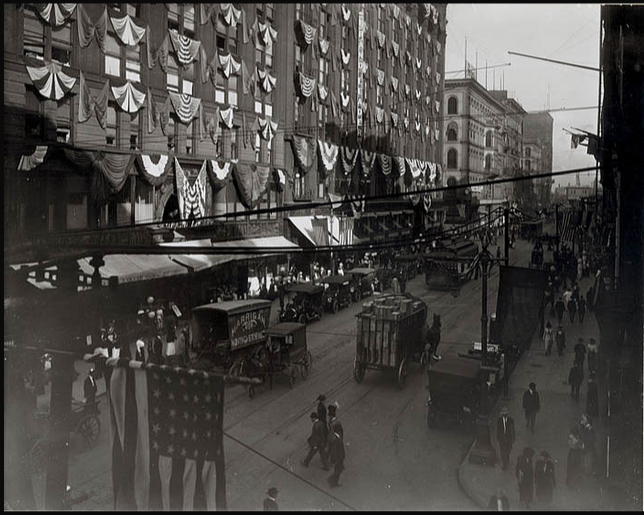 In January the St. Louis Fashion Fund, Downtown STL and St. Louis Development Corporation announced the “re-development” plan for the St. Louis Garment District, a nod to Washington Avenue’s history as “Shoe Street, USA,” and to a longer-term vision to extend the St. Louis entrepreneur ecosystem into fashion and design. This week, the group announced the next major phase in that plan.

The group held a press briefing in front of 1500 Washington Ave., a 10,350 Sq. Ft space which used to house Lab 1500, a co-working space that closed in 2015. With this announcement, City leaders, Downtown STL, and the St. Louis Fashion Fund outlined their progress on the plan to spur private investment and encourage fashion-focused developers to build out spaces like this one that will house and attract talent.

Buildings like the International Shoe Building across the street are meant to be anchors for that plan. To this end, City officials hired the firm Martinez + Johnson, a New York-based architecture firm credited with the successful redevelopment of New York’s garment district.

The placemaking plan includes a 20-block area from Washington Ave. to Delmar and N. 18th to Tucker, but the City’s investment goes far beyond just planned development, as it includes an overall branding strategy for the district, as well an effort to attract local and transplant talent to the area.

Susan Sherman, co-founder and chairman of the St. Louis Fashion Fund is confident that the overall plan has the fundamentals and the timing right.

“We’ve already laid the foundation for a fashion ecosystem, “ Sherman said, “and we have an extremely vibrant local fashion industry. The ecosystem is here. The trick will be getting it concentrated from Tucker to 18th.”

With the plans in place for development, and organizations like the Fashion Fund dedicated to boost and nurture new fashion startups, the idea of a revitalized St. Louis Garment District within the next few years isn’t far-fetched.

“Our goal is to turn young fashion designers into successful entrepreneurs,” said Sherman. Her example of a creative approach that could work for planned anchors like 1500 Washington Ave. is Ponyride in Detroit, a not-for-profit that is a mix of artist incubator and retail marketplace.

Other ideas championed by the Fashion Fund seek to replicate the technology startup incubation model of T-Rex but for design, playfully dubbed “D-Rex”.

In both cases, the deciding factors may be finding enough fashion and design companies with capital to fill these spaces, developers willing to provide the reduced rent required to help new startups flourish; and more patrons of the arts willing to underwrite the overall effort by supporting organizations like Sherman’s Fashion Fund, or visiting the district’s attractions.

Regarding the need to attract people to the area, Steven Stainbrook, Associate Principal at Martinez+Johnson Architecture said, “If we get that right in parallel with smart policy initiatives that build on the recent successes of the Fashion Incubator and support development of a broader ecosystem of creative industries, we will have all laid the groundwork for transforming the neighborhood.”