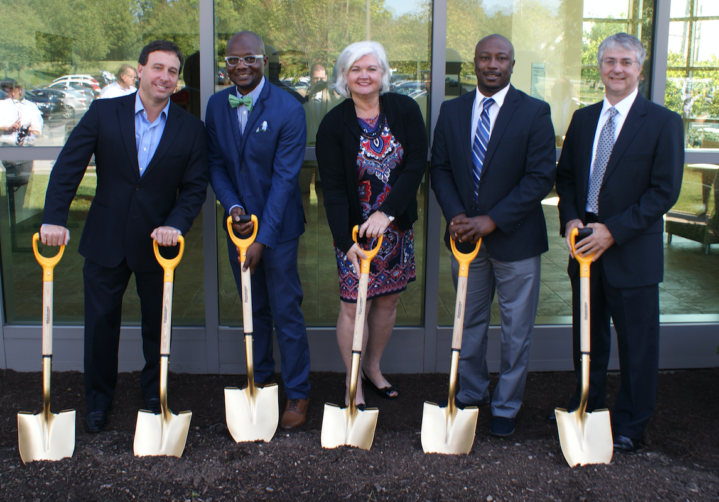 The Wellston STLVentureWorks location is undergoing a major expansion, almost doubling in size. Three tenants have had the opportunity to help make the project happen.

Admo Ogun is Managing Partner of Atelier3Design, an architecture firm located at STLVentureWorks at Wellston since 2010. His firm designed the facility’s expansion, which is currently underway and scheduled to complete at the end of 2017. Ogun has the unique ability to walk down the hall from his office to his job site. He says, “During construction, I write my field reports and observe progress right on site. I walk down the hallway, look through the glazing and see what I’ve got to see, and go back to my desk and work. I’ve never worked on a job site every day.”

STLVentureWorks is a system of five early stage startup incubation centers located throughout St. Louis City and St. Louis County. The incubators provide space, business services, networking and mentoring services at below-market cost. Mark Denk, Assistant Vice President of Innovation and Entrepreneurship for St. Louis Economic Development Partnership, oversees STLVentureWorks. He said,  “Our overall mission at St. Louis Economic Development Partnership is to grow companies of all sizes, from startups to large companies, throughout the St. Louis City and St. Louis County area. And we do that by strengthening the connections among companies and among people throughout the region. Our main focus is also to grow employees–companies that are scaleable by employee size and wages.”

Denk says the clientele for STLVentureWorks incubators represent different types of businesses and demographics than other area incubators such as T-Rex and CIC which tend to attract early stage technology companies run by more youthful entrepreneurs. Denk says, “We work with T-Rex and Cortex. We work with everybody all the time. But the majority of the companies that come into our incubators are people who have worked for somebody else for 10, 15, 20 years. After a while, they realize that they can either do it better, or they have an idea or side business that is running out of space in their home or whatever else it might be. I’m guessing the average age of a startup CEO in our incubators is about 45.”

Each STLVentureWorks innovation center represents a different industry. STLVentureWorks at Wellston opened in 2005 and focuses on light manufacturing. In addition to Atelier3Design, the ten companies currently housed there provide flooring, concrete, cleaning, electric, security, and home health care services. Wellston also has two “affiliate” clients–HVAC and Environmental Remediation services–who don’t rent space full time, but need an office to work in on occasion.  According to Vanessa Green, Site Administrator at Wellston, “Affiliate clients don’t have space.  They can use the affiliate office up to 32 hours a month and have access to the Conference Room as well. Eventually, they want to get big enough to get their own space in the facility.”

Due to increasing demand, an expansion effort to nearly double the size of STLVentureWorks at Wellston broke ground last fall, and will finish at the end of 2017. A total of $2.5 million has been invested in the project, including $2 million from the US Economic Development Administration (EDA) and $500,000 from St. Louis County Port Authority.

When the expansion is complete, the Wellston facility will be 18,500 square feet, up from 10,000 square feet today. Green says, “There will be seven more warehouses and three additional offices, two conference rooms, a break room, a coffee bar and a patio. It’s going to continue to be [for] light manufacturing.” Green also thinks the new spaces will improve her ability to encourage networking among the clients. “They’re all so busy, it’s hard to get them all together to network for our client networking in house,” she says.

The expansion provides a unique opportunity for clients at STLVentureWorks at Wellston to pitch their services in their own building. In addition to Atelier3Design, two other Wellston facility clients, Phillips Concrete Company and Unk Flooring, bid and won work for the expansion project. Phillips Concrete is providing concrete for sidewalks and curbs. Lionel Phillips, CEO of Phillips Concrete Company, says, “I believe we provided a competitive price for our supplies, but have no doubt that the fact that we are a current tenant in the facility provided some degree of favorability in the selection process.” He adds, “Phillips Concrete Services is coming up on our third anniversary. We have been in the Wellston incubator for about two and a half years. The biggest benefit that being in the facility has given us has been the affordability. Second to that is its central location, providing quick and easy access to spots all across the St. Louis region.”

Ogun worked for years at a large architecture firm in St. Louis.  He said, “I had some award winning designs with other firms and other opportunities were coming in the door, but the firm I was working for was becoming anemic and they just couldn’t sustain people toward the end of 2009. I founded Atelier3 with some other folks in 2010 and this building was an incubator that had smaller office spaces that you could use for your needs.” He has found working in Wellston to be an asset to his business. He said, “The Wellston area was underserved, and over the years we’ve been able to work with the city of Wellston and other developers who were trying to work in Wellston. We’ve had town halls with the City of Wellston and we’ve had City of Wellston events where we bring the constituents to some kind of outdoor session to engage them in different ways.”

After winning the design contract, Ogun faced the unique challenges of the project. Because of the placement of the existing building and the position of the parking lot, the only way to approach the expansion was to build a second building. Knowing that having two buildings would result in duplication of resources, Ogun convinced the Partnership to link them through the lobby areas and a new courtyard. He said, “In essence, what we were able to do with the design was push the parking all the way west but put the new building edition just shy of the curb of the parking lot. So we maximized what we could do in terms of building but also being able to retain the amount of parking spaces. There will be an introverted courtyard between both buildings that allows the users of the building to have some outdoor space to have lunch or have some outdoor type of interaction or even do some work on a nice spring day. ”

“The vibrant startup community in St. Louis County is continuing its rapid and unprecedented growth,” says St. Louis County Executive Steve Stenger.  “There is significant demand for business incubator space and services.  The Wellston incubator has been so successful that it has outgrown its space.  This expansion is going to double the size of this innovation center and provide many new opportunities in North County.”