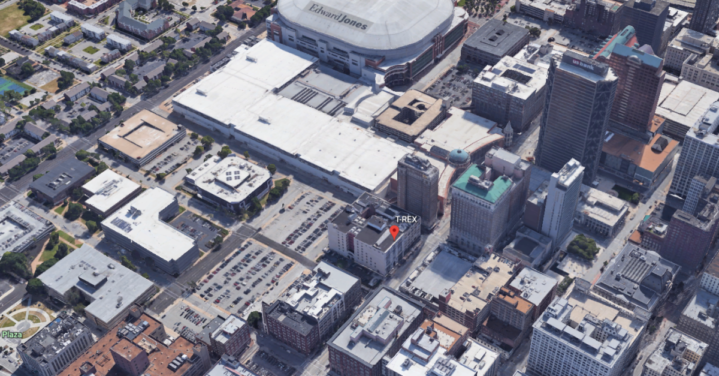 While the billion-dollar NGA 2 headquarters won’t be finished until 2024, T-Rex and a handful of forward-thinking geospatial startups and companies are preparing by laying some groundwork. T-Rex Executive Director Patricia Hagen recently announced the founding of the ‘GeoSpatial Resource and Innovation Center’- a working title. The center will be located on the 4th floor of T-Rex and will be the first one of its kind in the world, says Hagen.

T-Rex won a $500,000 federal grant, raised an additional $500,000 from Monsanto for naming rights and received new market tax credits to help build out the center.

“As a non-profit,” she says, “T-Rex has an opportunity to go far beyond just renting space. We can create a unique, sustainable institution here that will support the NGA and the USGIF with resources and tools.”

The center is the resulting brainchild of SLAWG, the St. Louis Area Working Group, a local industry group under the umbrella of the USGIF dedicated to all things geospatial. The group is led by local entrepreneurs Andy Deering, CEO of Boundless Geospatial, Justin Bennett, CEO of GeodataIT and Tara Mott from Esri, the world’s leader in GIS software. In addition to providing a monthly forum on industry news and topics, the group is also tasked with workforce development in anticipation of the NGA’s increased presence.

“There’s lots of momentum and a lot of different efforts in the space and about the workforce,” says Andy Deering. “Otis Williams and the SLDC are involved, the Universities are getting involved. There are lots of conversations happening around geospatial from K-12 on up.”

A cultural shift at the NGA towards openness

Some of these conversations are around the NGA’s expanding role in the modern era. Both Hagen and Deering recognized that the NGA has recently started an internal shift towards more inclusivity.

“The Agency used to be considered clandestine,” says Deering, “but lately, it has realized it needs to be more open if it’s going to stay relevant and be innovative.” He charts this cultural shift to overall technological advances with smartphones and the ubiquity of satellite communications and the growing need for the type of expertise the NGA can provide.

The agency isn’t just the keeper of military maps and spy imagery, he explains, they now employ thousands of developers, creating algorithms that track climate, traffic, and natural and manmade disasters.

Satellite imagery has recently been used to find ancient archeological sites for instance and helping to stop poachers from killing protected wildlife. With all these applications and many more to come, the NGA, like any forward-thinking agency is being forced to look past its own walls and for input and collaboration from the wider community.

Boundless moved to T-Rex in part to take advantage of the NGA, but Deering had other reasons to relocate their HQ to Downtown St. Louis. The company sees St. Louis as a strategic hub that will help them build up a talent pipeline and help grow business.

The cluster of hi-tech manufacturing around Boeing, Lockheed Martin, and Honeywell plays nicely with Boundless’ focus on open-source Geo-Information Systems.

The idea that St. Louis can build off this cluster appeals to Hagen from T-Rex as well, “Everybody is excited about this and everybody is pulling together,” says Hagen. “It’s about making St. Louis the global center for excellence in geospatial and location intelligence, and not a single person in the industry has told me this can’t be the case.”

Hagen plans to hire a director for the new geospatial industry center as well and is planning a physical facility on the fourth floor at the 911 Washington Ave building. This space will allow students, scientists, and industry reps to collaborate together on projects.

She admits that the exact nature of the center is still a work in progress and that the industry itself will continue to help define the space and its resources.

To align the center with T-Rex’s overall mission supporting early-pipeline technology startups, Hagen sees the resource center as an incubator of sorts, encouraging the creation of geospatial-focused companies here. T-Rex is reportedly interested in establishing a seed fund for this purpose as well.