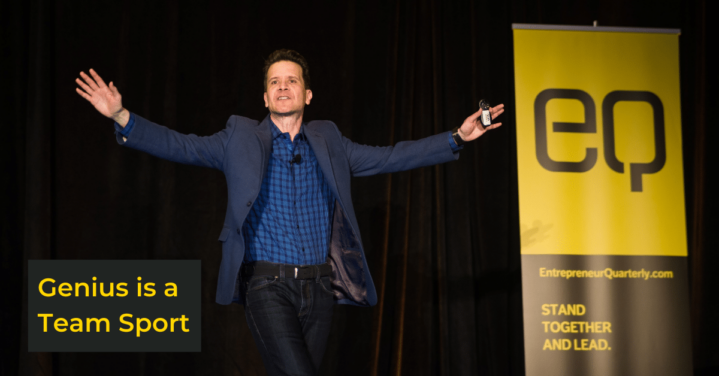 Tim Sanders on Why Love is the Killer App

Compassion may not be the first emotional reaction you’d associate with the cut-throat world of business. Best-selling author Tim Sanders believes it needs to be right up there.

Tim has credentials many can only dream of. He was a key player at Yahoo! before writing his New York Times bestseller, ‘Love is the Killer App: How to Win Business and Influence Friends.’

Now a much sought after speaker and consultant, Tim is keen to share his ethos. During this podcast in St. Louis with Innovation City, —recorded at EQ Leadership Labs— he gave some useful insights into how it can get the right results.

Listening to him, you’ll find out why whenever Tim’s around, love is in the air. For him, it’s the gift we all need to keep on giving.

The trigger that inspired him to think about the concept of love in business came more than twenty years ago. His then boss, Mark Cuban, often used the mantra ‘Make love not war.’

Mark’s now one of the shark investors on ABC’s reality television series, Shark Tank.  His goal was simple: to  care for customers in ways most businesses shirked. That meant his business should meet customer expectations no matter what. Being confrontational  was not an option.

Tim found this vision so empowering that he took the concept a step further. He wanted to help those he did business with to grow. “When you get empowered, you get energized. So I say, grow all the people you do business with,” Tim says.

‘Dahlink, You Have a Fantastic Book in You.’

In a world that was changing rapidly due to the advent of the internet, he became a mentor to many retailers. He found that doors opened up for him. He was soon rubbing shoulders with the likes of  Stanley Marcus, former CEO at Neimen Marcus.

One of the secrets of his success, he claims, was the act of giving. He created a short training program which incorporated the concept of love. One of its aims was for business to make you feel good about yourself.

It was at one of these programs that a rather imposing, well-dressed woman approached him. She’d become enthralled by the love element in his presentation. She  said to him, “Dahlink, you have a fantastic book in you.”

That lady was none other than Jan Miller, literary agent to Tony Roberts and Dr Phil. With her help, ‘Love is the Killer App’ was born.

Our Tangibles and Intangibles

A sequence of sharing one’s knowledge and network washed down with a spoonful of compassion is  explored in the book. We all have tangible and intangible values that we can offer to others, Tim explained.

Tangible values are things like time and money. They’re finite and Tim believes they don’t empower the other person.

Intangible values are different. For example, you might impart a piece of knowledge to someone. They might give you feedback in return. That  could in turn increase your  knowledge and develop your relationship.

When we connect people who we think would  benefit from knowing one another, our own network will explode, Tim says. “The more we give, the more we grow.” is one of his mantras.

The Power of Compassion

Compassion begins with recognising the burden others carry. It moves on to helping them  carry their burden. All this might sound more at home in a self-help book but Tim manages to show how it can fit into our relationships at work.

One person working in a large company might, for example, feel as though they have no meaning. They may be in dire need of recognition. Another may feel they need to be working in a system that’s fair, perhaps in terms of compensation.

A compassionate leader, he says, needs to recognize problems employees are experiencing. They then need to help them to find solutions. Offering a degree of autonomy and the ability to choose tasks will also help.

There’s Enough to Go Round

Tim’s love of books feels a little like networking in itself. When he drills down into a subject that fascinates him, he reads just about everything there is on and around the subject. He then draws his own conclusions.

He’s developed an ‘abundance mentality.’ His philosophy is that there is enough to go around. Once we grasp this, he says, we can help others. He believes we need to steer ourselves away from being scripted in scarcity and being too ‘dog eat dog.’

Without understanding this, he says, ‘Love is the Killer App’ wouldn’t have been possible. We must appreciate the time we have by using it to give to others. We’ll then realise the benefits of giving. The meaning of life will show up in the act of doing something good, he believes.

Future Trends and Advice for Those Starting Out

Tim reckons we must become experts in Artificial Intelligence and fast. He thinks AI has the capacity to be a bigger influence than the internet.

He would also prefer it if startups avoided wasting money by outsourcing technology. When you’re launching a business, you need to be watching every cent and second. “Make technology experts part of your in-house team or hire them with your first capital,” he says.

Here are Tim’s other top tips for new starters:

If you feed the favor economy with value, good things will happen, he believes. You will create a collaborative web that no problem can withstand.

There’s a difference though between being a super connector and a networker, he says. We should all be investing in those who display heroic qualities such as giving. By definition, these are people who are not just takers.

Keep giving to the givers. This is what he believes is going to make the world go round.