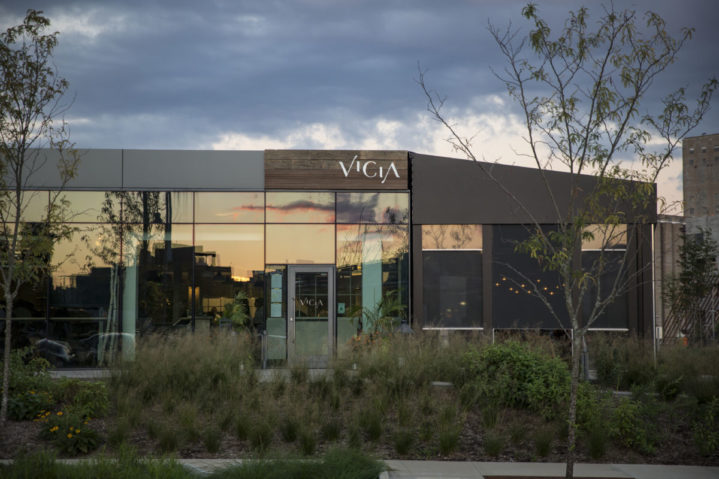 Vicia, A New Restaurant at Cortex, Named 10 Best in the Country by USA Today

Vicia was voted number 2 in the 2017 rankings of 10 Best New Restaurants in the United States, in the USA TODAY 10 Best Readers Choice travel award contest. The award celebrates restaurants that opened in 2017 and made the greatest impact nationwide.

The biggest addition to the St. Louis dining scene in a long time is, without a doubt, Vicia, located in the Cortex Innovation District. Chef Michael Gallina and his wife, Tara, took all that they learned at New York’s Stone Barns restaurant (unarguably one of the best restaurants in the U.S.) and brought it back home. With a focus on simplicity and using only the best ingredients available to them, they’ve created a vegetable-forward (yes, there is meat on the menu too—this is the Midwest, after all).

For dinner, you can choose to order a la carte or to take part in the chef’s tasting menu, which is DEFINITELY the way to go. It’s a barrage of dishes ranged from something as simple as a perfect peach wrapped in locally made speck to a vegetable mole with more complexities than Facebook’s privacy settings. Wine aficionados should splurge for the tasting.

If a tasting menu with wine pairings is out of the realm of possibility to because, say, you have a start-up and you’ve deferred your salary so the company doesn’t go under — and god please someone buy us — lunch is an absolute steal. You can get up to three different items on the lunch menu for under $15, all of which are sure to please you.

Still not sold on the whole vegetable-forward thing? Well, you sound like you’re a difficult and possibly miserable person. This is big news. The founders brought their hugely successful restauranteur skills back home to St Louis in March 2017 — and then won #2 best new restaurant in the country in a matter of months.

So, really, you might want to check it out after VentureCafe.

All of which is to say that St. Louis’ restaurant scene is on a roll. They’re like an unrecognized category of local startups making a difference. Three years ago, Niche kicked things off with the city’s first James Beard Awards, followed quickly by a Sidney Street Cafe Beard Award, and since then, a million other accolades. We’re no longer being ignored by the likes of Food & Wine, GQ, and Bon Appetit (the latter, also recently awarded Nixta number 9 on their list).

In fact, St. Louis has been honored multiple times for its outstanding restaurants, new and old. Adding another to the award list is a great way for the city to kick off 2018.

“We are honored and thrilled to be named a top new restaurant in the United States by USA TODAY 10Best Readers’ Choice,” said Tara Gallina in a press release. “We are amazed at how the St. Louis community has supported us and couldn’t be more thankful to everyone who voted.”