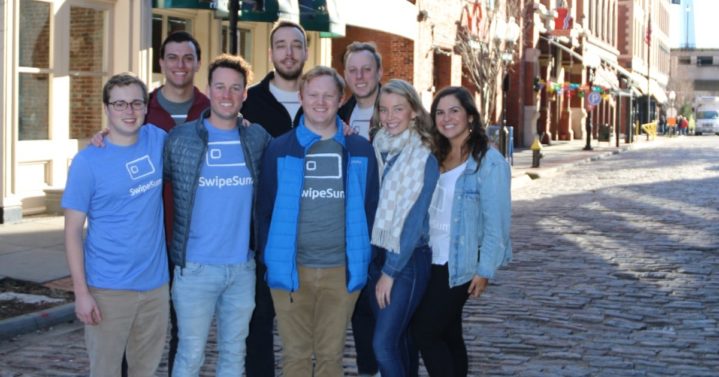 Need a hand up? Immersing yourself in a "culture of success" could become a reality for you in St. Louis.

Michael Seaman, co-founder and CEO of SwipeSum, relocated his business to St. Louis 18 months ago. He’s never looked back since winning one of the $50,000 grants the city has to offer.

Quitting his nice high-paying corporate job was a risky strategy as his new company was only making about $100 a month. Sure, the cash that Arch Grants gave him was useful, but that’s only part of the story.

Armed with a great idea and boundless confidence, Michael recounts his journey of moving to St. Louis “with a duffel bag and a dream” in the amusing video below.

Applying to the Arch Grants Global Startup Competition could see you following the same startup growth trajectory as other daring founders.

With the support Arch Grants gave him, he and his brother (and co-founder) Stephen soon closed new business, made new hires, move into a new building and even raise a million dollars. The brothers found that St. Louis gave them super-fertile ground into which to plant their ideas.

“We specifically chose St. Louis as home because of the passion in this community,” says Michael. “St. Louis is home. It’s where you want to be.”

Arch Grants handed them a wad of cash but also provided them with a great support network. It’s helped them every step of the way.

As a result, the SwipeSum founders say they’ve been able to embrace a culture of success. They’ve experienced loyalty, and selfless generosity, as well as a few great barbecues.

“We were welcomed into the St. Louis family and given a seat at the table. You can’t put a price on that,” adds Michael, who’s even fallen “in love with a beautiful St. Louis woman.”

51% of the Founding Team or one Founder and 51% of the team needs to live in St. Louis for the program year. The business needs to locate critical operations or headquarters in St. Louis.

Arch Grants has given more than a hundred and fifty companies the chance to thrive. Most of the Arch Grant Recipients that relocated have chosen to remain in St. Louis.

Between them, they’ve created over 1,800 jobs. They’ve generated over $273 million in revenue, and they’ve attracted over $239 million in follow-on capital.

You can follow your dream too. Apply now and get into the slipstream that companies like SwipeSum are generating. The Arch Grants Global Startup Competition is open to applicants in early-stage to seed funding stage and across all industries from all over the world.