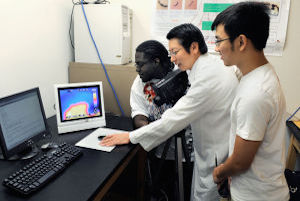 STL-based Immunophotonics is Taking on Cancer Using Your Own Body

What Immunophotonics is working on is a therapeutic vaccine designed to pull back the curtain on cancer, and train the body to see through the disguise.

A diagnosis of cancer often brings shock, sadness and fear as patients prepare to confront one of the most pervasive and difficult diseases in the modern world.

“Cancer is sneaky, in simple terms,” says Lu Alleruzzo, Chief Operating Officer of St. Louis-based Immunophotonics. “It knows how to hide from the immune system.”

That deception is one of the primary reasons combatting the disease is so difficult. What Immunophotonics is working on is a therapeutic vaccine designed to pull back the curtain on cancer, and train the body to see through the disguise.

“The way people traditionally think of vaccine, is as a flu vaccine. You grind up the flu virus, you inject it into a patient to inoculate them. So when they come in contact with the flu virus at a later date, their immune system is already trained to kill it off,” Alleruzzo says.

“The problem with cancer is it’s your own cells that mutate. This means that you can’t take someone else’s cancer, like one does with the flu virus, to protect yourself from developing cancer.”

The potential solution? A process comprised of two injections.

The first is an optical fiber connected to a laser device, which is injected directly into the tumor. The laser heats up a portion of the tumor to a temperature where it releases whole-cell tumor antigens, which are proteins and molecules specific to that cancer.

“The activated immune cells find the enemy, process the enemy and say, ‘ok this is what the enemy looks like,’” Alleruzzo explains.

That enemy profile then gets taken to the lymph nodes, where, in theory, the body is able to formulate a large-scale response. Alleruzzo sums up the process by saying it’s “intended to educate your body’s immune system to recognize the cancer as foreign and eliminate it wherever it is in the body.”

So far, the results have been promising. Through initial research, Immunophotonics has found the process not only results in immune cells targeting the original tumor, but also distant metastases in the body.

In a small, investigator-driven first-in-human trial outside of the United States, 16 late-stage breast cancer patients were administered the investigational drug and results were recorded over 12 months. In that small sample, progress was made.

“Some of the patients were told ‘there’s nothing else we can do for you,’” Alleruzzo says. “And at 12 months, while not all of the patients responded, we had encouraging results, including some patients that were complete responders, meaning they had no identifiable tumor tissue.”

For Alleruzzo and his team, the vision of facilitating such a transition is transformative, and provides motivation during the arduous early stages of product development.

“When a doctor says, ‘there’s nothing else we can do for you.’ They have stage four breast cancer, they have multiple tumors in different locations. And 12 months later, you meet the person and they thank you for everything. The doctor tells you, ‘Yes, this is a complete responder in this trial.’ It changes you,” he says.

‘It’s really incredible. It gives you that excitement and encouragement. This long battle you hear about in drug development, it takes time, money, energy, all of that. It becomes negligible because you know why you’re doing it every day.”

“Of course”, Alleruzzo says, “we are in the early stages of the rigorous development and approval process and these are early trials that need to be expanded on, especially in the US to further assess the safety and efficacy of this developing cancer vaccine.”

Alleruzzo is a bioengineer with an MBA, and knows an essential part of the company’s mission is to get the investors, who made the progress possible, a return on their money. But the human element isn’t lost in that pursuit.

Experience with cancer —be it as a patient or a supporter— is nearly universal in 2015. The possibility of restoring hope and lessening the pain of that experience is at the heart of Immunophotonics’ work.

“What we’re driving toward is to maximize the number of patients we can help with this. I have seen firsthand the potential of what this therapy can do,” Alleruzzo says.

“That’s why I do this. That’s why everyone on our team does this. We share that vision and that passion to genuinely make a difference.”

The next step for the company is to test the drug and process in larger clinical trials. While still pre-clinical in the United States, the company is working toward additional trials abroad, and securing FDA approval to begin clinical testing stateside.

“It’s incredibly humbling to be a part of it. You want to make a difference as fast as you can, and you realize it takes time, money and energy. And a lot of people.”