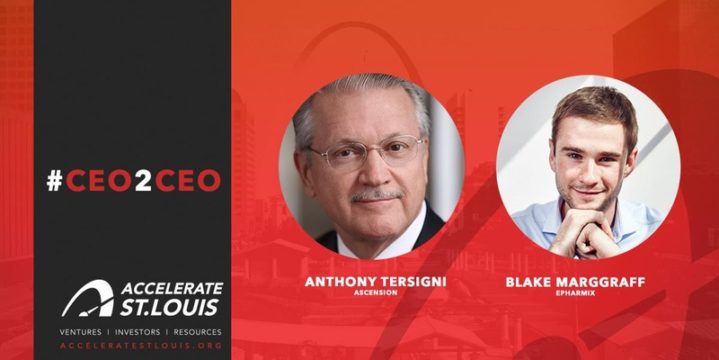 #CEO2CEO, the event series hosted by Accelerate St. Louis that pairs CEOs of startups and large enterprises for one-on-one conversations, returns on April 10.

#CEO2CEO, the event series hosted by Accelerate St. Louis that pairs CEOs of startups and large enterprises for one-on-one conversations, returns on April 10. This first CEO2CEO event of 2017 will focus on the healthcare industry with Anthony Tersigni, CEO of Ascension and Blake Marggraff, CEO of Epharmix. 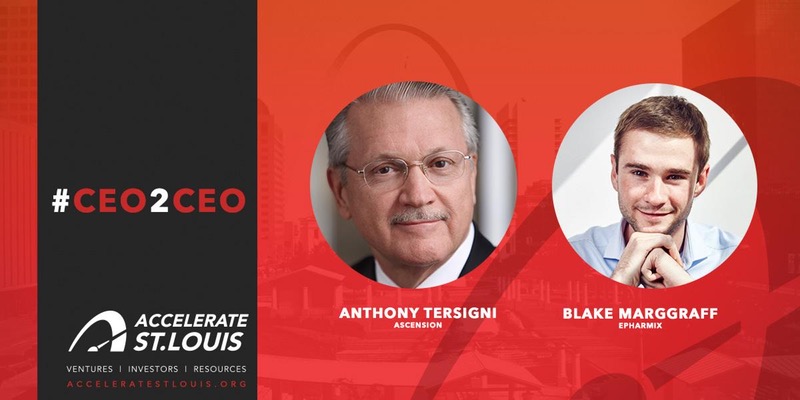 Accelerate St. Louis, which represents a partnership between the St. Louis Regional Chamber and St. Louis Economic Development Partnership, began hosting the CEO2CEO events in the fall of 2015 with the goal of increasing corporate-startup connectivity.

Blake’s passion for both technology and research originated during his work in nuclear medicine, one part of which was awarded the top prize at Intel’s 2011 International Science and Engineering Fair. He graduated from Washington University in May, 2015.

Ascension is the largest non-profit health system in the United States and is headquartered in St. Louis. Tersigni has led the multibillion-dollar organization for more than 12 years. As previously reported in the St. Louis Post-Dispatch, Ascension owns a for-profit subsidiary called Ascension Ventures, LLC that has created venture capital funds to pool $550 million in investments in startup companies.

#CEO2CEO is free to attend. The event format is a focused conversation between the two CEOs about innovation and trends in their industry. The conversation happens in front of a live audience, similar to a panel discussion.

The event runs from 4-6pm at T-REX Innovation Center Downtown. Register for the event here.

Register for the event here.