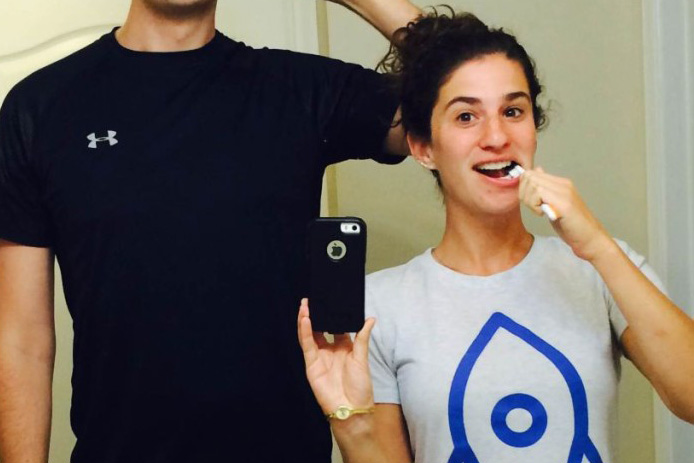 If you're in the startup community, you know Rosa Mayer. Here are a few things you may not know.

If you’re in the startup community, you know Rosa Mayer. Rosa moved to St. Louis in 2009 to work with College Bound.

When that assignment ended, she became part of the burgeoning coworking movement as it started in St. Louis at St. Louis’ first coworking spot, St. Louis Coworking. Rosa then served as a consultant to Nebula, later joining The Partnership for Downtown St. Louis to help launch T-REX.

It’s safe to say Rosa has helped hundreds of today’s entrepreneurs and ambitious disruptors get their start. Now, Rosa is VP of Company Engagement at LaunchCode, the St. Louis based non-profit founded by Jim McKelvey of Square.

Rosa brings together companies needing technical talent with skilled people whose backgrounds don’t always fit the job description but who can do the job if given the opportunity. LaunchCode aims to solve the tech talent gap through its unique paired-programming apprenticeships.

How do you describe your work with LaunchCode?

We help companies find the talent they need and go to bat for people who are smart, driven and have the potential skills to fill the tech talent gap.

Why does that matter?

I have witnessed – with my own eyes – that there would not be as big a tech talent gap if people just hired a little differently and gave another person a chance.

A LaunchCoder is anyone that knocks on our door – from the long term unemployed to the 16 year old nerd in the basement. We aim to be accessible to diverse populations and are working on opening a Mentor Center on Delmar in the Central West End.

How did you get involved?

I was running T-REX and knew Jim McKelvey through that and volunteered to help LaunchCode efforts. I decided to join full time after I saw what incredibly driven people were behind the effort to make a positive impact on people’s lives.

The moment when a person I’ve been helping for months finally gets a job. And, hearing President Obama say, “LaunchCode went to bat for Lashana Lewis and got her a job,” was really cool, too.

Tell us about the photo you sent for use with this story – where did you take it, what’s in the shot, what’s interesting to you about it?

It was taken in Miami where I have been working for a bit to get the second LaunchCode office off the ground. The other person is Daniel Fogarty who interviews LaunchCoders. The reason this photo was taken was because I care about my teeth and anyone from LaunchCode who has traveled with me knows this.  I took this and texted it back to the St. Louis LaunchCode office to make people laugh.

How you would describe your point of view?

The world is way over half full of good people.

I’m a natural matchmaker. I could have been a yenta in another life.

I like what I do. Maybe I’d also do a side project selling temporary tattoos.

Life and work balance.  Telling someone they didn’t get a job – I hate that conversation. Finding time for yoga.

My grandma is still a badass. She continues to give me great advice.

For a while I really failed at following up on email. I learned I needed a system, which I now have – tagging things and not always keeping email open, but setting time for it.

Where can people find you when you’re not working?

On the chin-up bar at Tower Grove park, attempting chin-ups.

What is the thing most people don’t get at first about what you do?

People think LaunchCode is a charity at first – they don’t realize we solve a really big problem for companies until they take a LaunchCoder. And, how much we sweat over matchmaking, making it a good fit for all parties.

Imagine you spend a long flight between amazing people – who are they, and what do you talk about?

If I could sit between Barack Obama and Beyonce, that would be a sweet ride. Or between the CEO’s of two airlines so I could get them to agree to take LaunchCoders.

Even though I’m part of the tech scene, at a store I will wait the extra ten minutes for a human to check me out. Not everything needs to be tech. I want to keep people part of the local economy and community.

All of us LaunchCoders use the 7 Minute Workout app at around 2:30 every day.

You ride Metro – how often, why and what do you like/dislike about it?

I’m a big Metrolink fan. The best part is it goes straight to the airport and is clean, reliable, easy and I don’t have to ask people to pick me up. I dislike that it does not run North-South.

LaunchCode is expanding – you’re based in St. Louis and are working in South Florida, too. Where are you going next and what’s it like to be in multiple markets?

LaunchCode is in multiple cities now – Kansas City is next and most likely a few others in 2016. It is an exciting operation to be part of and I am constantly learning.  I’ve noticed Miami has STL beat on one thing for sure – Spanish pop radio stations. It is the hardest part for me when coming back to the Louis.

My notebook. And my cell phone, but I try to turn it off. The NextMetroSTL app, built by a LaunchCoder, to see when the next train will arrive.

What’s your go-to tool for the tough stuff – those that don’t get what you’re doing?