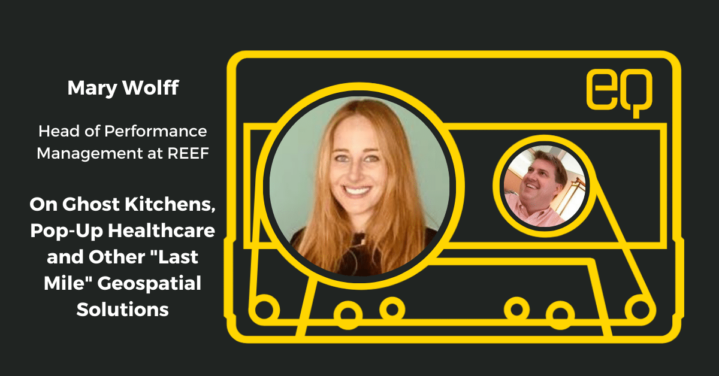 ‘Last mile’ opportunities in the retail, hospitality and delivery industries are exploding just about everywhere. One person who knows a thing or two about this growing market is Mary Wolff.

Mary’s been a founder in male dominated spaces, a lawyer, worked in AI, and had her own startup which won an Arch Grant. Read on to find out the insights and advice she has to offer startups and established companies during a conversation with Dan Reus for EQ.

A Fresh Take on Urban Spaces

What REEF does is take underutilized urban spaces and transform them into something it calls neighborhood hubs.

It sees parking lots as blank canvases, spaces that can be used for anything, but without the capital expenditure needed to put up a large building or build a doctor’s office.

“We think of ourselves as a physical App Store for other third party businesses. We provide the infrastructure, the lots and whatever else is necessary,” Mary says.

Proximity To the Consumer

“One of our largest verticals is the neighborhood kitchen,” Mary explains. Some people will know these as cloud, ghost or dark kitchens. They serve up cooked food through delivery apps.

The value of doing this from parking lots in densely populated areas is being closer to the consumer, Mary claims.

“We have smaller businesses that are local and looking to expand into a new neighborhood across town. We also see large national brands that are interested in opening up in every city overnight,” she says.

“If you look at uses such as COVID testing sites, you don’t typically want to bring people indoors.” This use for a site will hopefully be short-term, Mary explains, and could then change into somewhere to give out vaccines.

“Every day there’s a business that comes to us with another new concept,” Mary says. There’s even been talk about vertical farming so that people will be able to actually get their produce on their block.

Building Up Experience and Knowledge

She had plenty of passion but lacked discipline and focus, she says. A subsequent opportunity to work as COO for a former legal client meant Mary was accountable to others and allowed her to hone her people management skills.

Onward and upward, she became CEO of another company which involved some tough restructuring choices, but ultimately doing what she felt was right.

She was then hired directly by billionaire businessman and investor, Eddie Lampert, someone she describes as one of the smartest people she’s ever worked with. She helped him to develop gaming elements in the loyalty programs of Sears and Kmart.

This, she describes, as being a bit like working for a startup within a large corporation. She had taken control of an app with millions of weekly users who would play games in order to win points which could be redeemed for products.

She became fascinated by the behavior of users as well as wanting to understand who they were and how to target them.

Using Technology As a Motivational Tool

“If I look at all my previous jobs, I kind of package them up and bring them with me,” Mary says. “I am lucky that REEF is a very technologically progressive company.”

“I’m introducing chatbots and gamification into our workforce to create incentives which will empower our team members to reach their goals. This will also bring with it an element of data driven decision making.”

“One thing I’ve always been really passionate about is efficiency. That’s been the backbone to everything I’ve done.”

“Get the data, recycle it and keep understanding how you can change your processes to make people’s experiences better,” she advises.

“The most important ingredient for the success of any type of business is its culture.” That starts with inclusivity and empowerment, Mary says.

She sees a real benefit in giving people at any level the ear of the stakeholders. People need to be encouraged to give feedback too, she says.

She describes REEF as being a place where people feel happy and want to stay. Everyone contributes, she says.

“If you’re looking for a great place to work and you want to work hard, then we are interested in working with you. I’ve given jobs to people who’ve found me on LinkedIn because I appreciate their reaching out and their confidence,” she says.

Get Innovative with Reef

“Any business that wants to launch into real estate, reach out to us, whether that be for the short term use of a space or something that may exist longer. We’d love to partner with you and launch something innovative,” Mary says.