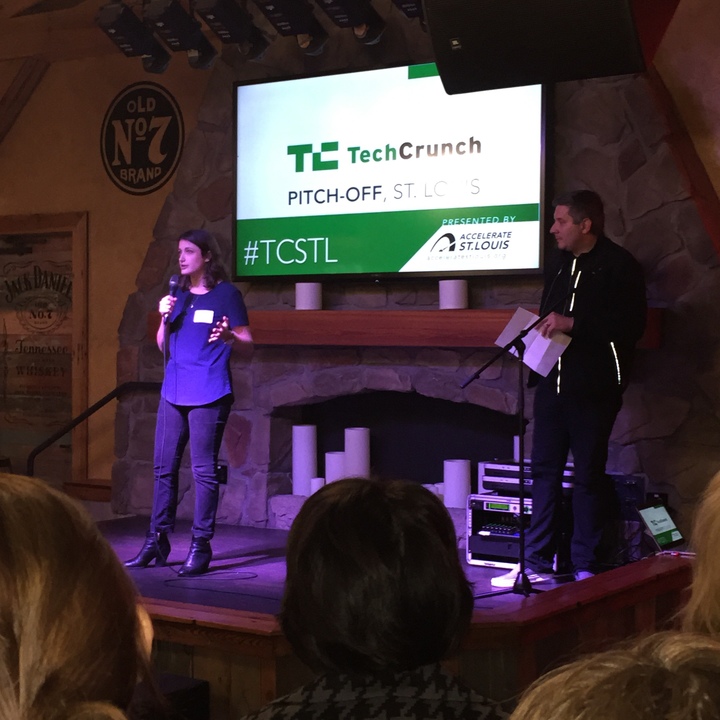 Sixty seconds isn’t a lot of time to convince investors to consider your company, but that’s all the time the 10 companies who pitched at the first TechCrunch Pitch-Off had last night at PBR in Ballpark Village, with Zoë Scharf of Greetabl walking away with the top prize of $5,000.

“Joe (Fischer) my co-founder was the biggest calming force I possibly could have had,” says Scharf.

“I had a really weird, gut-churning feeling all day and Joe was like, “Listen you know what you’re doing just as much as everyone else. Everyone else is stressed out and scared, but you’ve got a great company.” He kind of balanced my head on my shoulders and made sure I was okay.”

The event was presented by Accelerate St. Louis, with Simplify Commerce by MasterCard, Lewis & Clark Ventures, Industrious, CIC, Ballpark Village, Kona Brewing and Dark Horse Wines all on board as sponsors.

“It was a nice mix, some things we’ve seen before and some things new,” says John Biggs. “I’m glad that we saw a lot of female founders.” He also mentioned that everyone seemed on point and everyone was on time, which is important.

“I actually created a document where I wrote down what I say to people in real life when I’m out; how I explain what Greetabl is,” says Scharf.

“Typically people get so caught up in ‘Okay, this line is necessary to go first, then this line and then this one,’ when in reality all you need to do is connect with people. So I told the story the way I usually say it out loud and then just elaborated on certain points that I felt required clarification.”

So what’s next for Greetabl? After recently updating their website, the customizable gifts and greeting card startup is now looking to spread the word.

“We’re going to be really ramping up our marketing efforts,” say Scharf. “For the first time ever we are foraying into the paid advertising world of things. So we’re going to be starting with Facebook advertising, retargeting, things like that.”

“In small ways in the past we’ve done tiny, little campaigns, and now we are approaching it with attention and professionalism. We’re really looking forward to getting the word out to as many people as possible.”