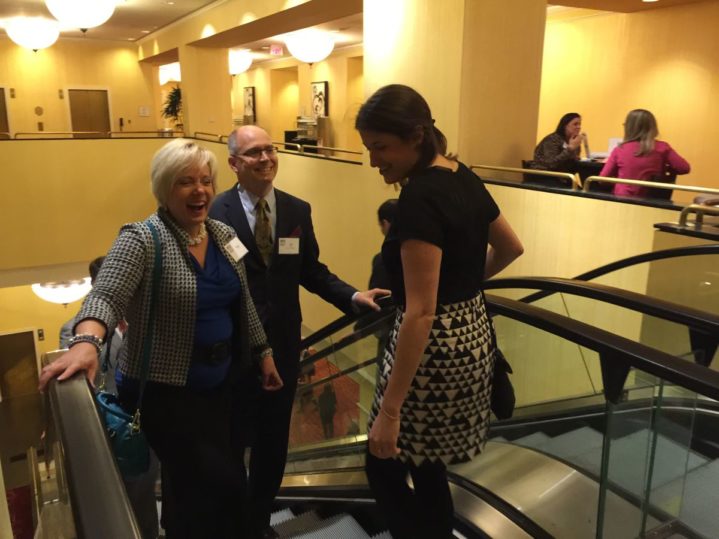 Tonight more than 800 people gathered at the Marriott Hotel in Downtown St. Louis for the 2015 Arch Grants Gala. The annual event gave the community a chance to meet with past and current Arch Grants winners, who gave product demos before the dinner, and gave Arch Grants the chance to introduce the companies making up its 2015 class, announced earlier today.

Amid the excitement, the Missouri Technology Corporation announced that it would awarded $1 million to Arch Grants over the next two years.

“We are very appreciative of the efforts of Governor Nixon and the state legislature to ensure MTC has the funds it needs to accelerate economic development through investment in tech startups and entrepreneur support organizations like Arch Grants,” said Ginger Imster, Arch Grants Executive Director.

“High-tech, scalable businesses with the potential for national or international impact are economic drivers for Missouri. Through continued funding, Missouri is becoming the hub for entrepreneurship in the Midwest and is an especially attractive place to start and grow a tech startup.”

Created in 1994 to promote entrepreneurship and to foster the growth of high-tech companies, the MTC has provided more than $24 million to 70 startups, helping companies leverage $200 million in private capital to commercialize their products and services and create jobs.

This news further builds on Missouri’s reputation as a place that supports new business development. In 2015, Missouri was ranked—for the first time—a top 10 state for startup funding according to Forbes. And last month, census data showed that Missouri leads the nation in new business creation.

Also announced during the event were the 11 companies chosen for the Winter 2015 class, each receiving $50,000 in non-dilutive funds paid throughout the next year. So far, 91% of active Arch Grants winners stay in St. Louis, with 309 jobs retained.

Founding Location: Clayton, MO
What they do: Arch Innotek is a biotech firm with a low-cost method for producing nutritionally important carotenoids.
In the Know: CEO Craig Morley previously served as an Entrepreneur In Residence for BioGenerator.

Founding Location: Branford, CT
What They Create: Babyation creates products for parents, starting with an innovative breast pump.
In the Know: Husband and wife team Samantha Rudolph and Jared Miller held their first impromptu brainstorming session on a drive back from vacation.

Current location: St. Louis, MO (specifically Washington University)
What They Create: A sleep-optimization pillow sensor. The company uses a mobile app to track sleep patterns and provide music or other sleep-inducing sounds.
In the Know: Co-founders Zimin Hang and Ben Bronsther, both Wash U grads, originally aimed to just measure sleep better from the comforts of a person’s bedroom, but their idea led to actually sleep improvement.

Founding Location: St. Louis, MO
What they do: Hemadvance is a biotechnology company looking to diagnose and treat cardiovascular disease.
In the Know: founder and CSO Nicola PozziPh.D., recently was awarded a $214,500 grant from the American Heart Association to build upon a breakthrough discovery about the way in which blood clots.

Founding Location: Chicago, IL
What They Create: An indoor home gardening system.
In the Know: Founders, Tejash Patel, Marin Assaliyski and Danny Varghese met at Illinois Institute of Technology while pursuing their undergraduate degrees. Their goal was to identify a problem that significantly affected the lives of people but was unnoticed by major companies, throwing their cards into the home organic gardening space.

Founding Location: St. Louis, MO
What They Create: The Normal Brand is a St. Louis clothing and accessory line tailoring to the lives of the Midwest.
In the Know: Founder Jimmy Samsone is one of 10 children and recently launched a women’s line inspired by his three sisters.

Founding Location: New York
What They Do: Scopio offers access to licensed photos and videos on social media.
In the Know: Scopio also allows social media savants to get paid through by submitting images.

Founding Location: Miami, FL
What they Create: Taptl creates a transparent liquid-crystal display for store windows, office buildings, shopping malls or yachts, a market the company is cornering.
In the Know: Mary Wolff is a native St. Louisan, a member of the Prosper Startup Accelerator fall class of 2015 and on the cover of EQ’s first print issue releasing this week.

Founding Location: Barcelona, Spain
What they Create: seat belts for buses, race cars and specialty vehicles.
In the Know: Owners Claudia and Ted Gast trace its origins of GWR to 1987.