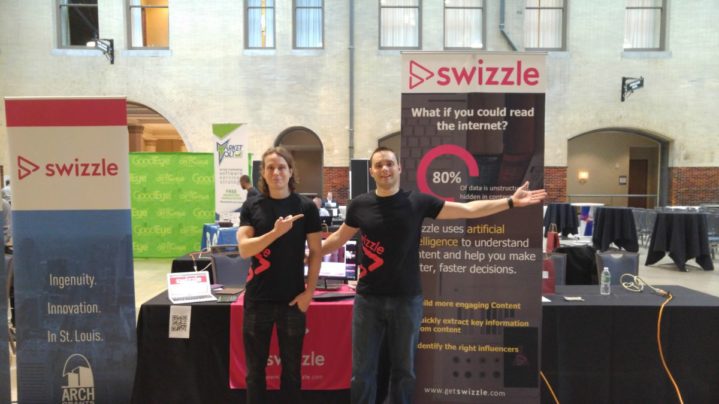 In 2009, Nick Szabo looked around his hometown of St. Louis and didn’t see a lot of opportunity. The systems and personalities around entrepreneurship that may seem inherent to some were not yet in place.

So the ambitious recent University of Missouri-St. Louis graduate set his sights on the globe. His trajectory landed him in Seoul, South Korea.

“When my wife and I had the opportunity to leave St. Louis, it was an easy decision,” says Szabo.

“We always thought St. Louis would be a nice place to visit, but we never thought we would live here. Seoul is one of the hottest startup cities on the planet, and I wanted a shot at creating the kind of company that would require investment first as opposed to a mom-and-pop.”

In 2014, he and some partners started Swizzle in Seoul. The company started as a mobile application that let users share and curate music video playlists with friends.

Quickly, the company began to attract the attention of larger partners in the media and entertainment industry. As their insights into how new media and social networks behave began to take shape, simultaneously, they saw a problem emerging for their new partners.

“We saw big media conglomerates who are leaders in the world in some niche, but they would base content and business decisions about their audience on gut feeling or intuition,” says Szabo, COO of Swizzle. “We were shocked to see that an industry born out of data would use intuition as the basis for their marketing decisions.”

Swizzle took on a new CTO steeped in the discipline of artificial intelligence and began to build out influencer marketing analytics programs that read anything published digitally on a particular topic using words and cues to understand tone, content and the context of data. As opposed to guessing what topics or media matter to brand influencers, Swizzle provides real numbers.

As the company expanded the consultative service side of the business, they realized that a US location would help them access greater funding and growth potential. They had their pick. And, St. Louis was not among Szabo’s first choices.

However, a family emergency back in March 2015 brought Szabo back to his hometown. And what he witnessed did not fit his recollection.

“The most shocking thing was Cortex. I went to Venture Café and saw what how that district was reshaped. And since Cortex was born out of MIT, one of the most respected innovation centers in the world, I knew there was something to St. Louis,” says Szabo.

Szabo quickly learned of Arch Grants Global Competition which gives recipients a $50,000 grant, access to expertise and an immediate network of business support. He jumped on the opportunity to apply for the grants, and something happened to Szabo that has never happened before: he was rejected.

“The Arch Grants program was one of the hardest competitions I have ever entered for our company,” says Szabo.

“On my first attempt, I think I made too many assumptions about being a South Korean company and thought I would be a shoe-in. Then I was able to reapply, and my partner and I were invited to come back in June to pitch.”

It was that June visit that really sold Szabo and his partner, Ian Lee, on St. Louis. Before that visit, Lee had expressed interest in other cities, but when they toured the different entrepreneurial support structures in town and saw how they worked together, both Szabo and Lee knew where their US operations would be at home.

“The community here is super open. Ian and I had been to a lot of other cities and this was the first place we felt immediately welcome,” he says.

“Most startups go to places like Silicon Valley and die because there is no support and people are not helpful. We heard terms like ‘rising tide of entrepreneurship,’ and we had not heard that anywhere else.”

Swizzle became one of the 2015 Arch Grants competition recipients and was able to launch its US version of Swizzle Labs this month. And while the cash was welcomed, it did not make the biggest impact on the company according to Szabo.

“More than just the cash, [receiving an] Arch Grant says to all of the other investors I talk to that I have been vetted,” says Szabo. “It also gets me access to almost anyone that I want to talk to in the city, including the media.”

Swizzle is finishing up a Series A round of funding in South Korea, and though the company will keep the product team in Seoul, Szabo plans to grow the St. Louis team to serve as the marketing and sales hub.

“Having our base in St. Louis has a lot of advantages for us beyond just the cost savings,” says Szabo. “There are large marketers and a lot of advertising agencies in the area who can benefit from our offering. We will end up with offices in other cities, but St. Louis will remain our home.”