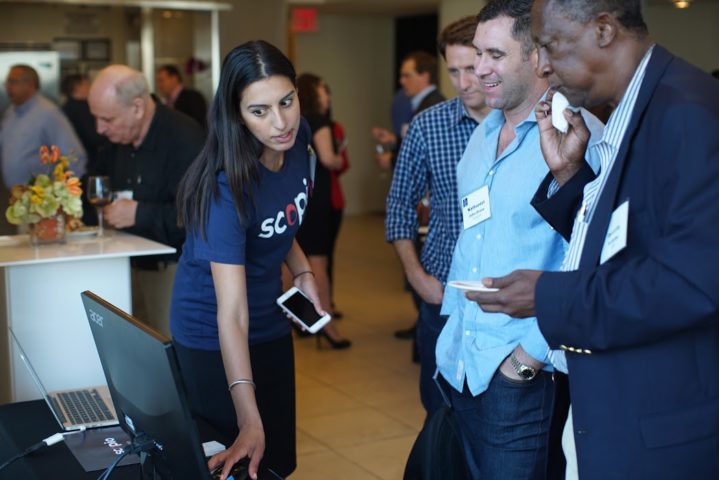 The First Startup Roadshow Back from New York

Connect is one of those buzzwords frequently used in the startup world, as can be heard in any given pitch, but it’s also a key concept in getting those startups financed.

Recently, The St. Louis Regional Chamber, Accelerate St. Louis and Thomson Reuters selected 15 startups –primarily FinTech– for the St. Louis Startup Roadshow in New York, allowing them to connect with investors and potential clients in New York who can help finance their venture, adding more fuel to the local technology sector here and transforming it from one theoretically set to skyrocket to one that actually does.

“We wanted to do something that would make a bigger splash, to try and get us more attention than we’ve been getting and it seemed to work,” said Len Reynolds, the director of financial and information services for the St. Louis Regional Chamber.

The Roadshow took place September 8 in a room at Thomson Reuters overlooking Times Square. One-by-one, founders representing the 15 companies gave their elevator pitch to a group of innovators, venture capitalists and financial executives, the movers and shakers of the startup world and media.

Christina Hawatmeh, founder of Scopio, explained to the New York crowd that 2.4 billion pictures are uploaded to social media every day, yet most companies are still using stock photos to market its products or services—these replicated images don’t make a connection with people the same way that real life does.

Scopio finds pictures from social media and sifts through them using an optimized search engine to find “original, user-generated gems of social media” that are precisely what the company wants to use. Hawatmeh received positive feedback from her demo and a lot of interest in her company, including a few bites she’s following up on.

The pitches were kept to just two to three minutes long so the founders could network with the high-level crowd.

“The people who want to talk to you are talking to you,” said Nick Szabo, a founder of Swizzle.

Swizzle also focuses on this particular type of brand marketing, called user generated content, and mines data by scouring the internet for content, analyzes the results and identifies key talking points and trends and then measures the brand’s influence over time. The company was built in Seoul, but returned to St. Louis after receiving an Arch Grant. Szabo made a few connections with potential client connectors and venture capitalists.

A number of startups made key connections, and “if it had not been for this event, they would not have had the opportunity to meet the level of people pertinent to their work and what they’re doing,” Reynolds said.

It would seem that the mission was accomplished. The startups showed off the talent in St. Louis and also generated interest in their companies. Those in attendance in New York now have a better sense of the startup community, and potential for growth, in St. Louis.

“I wanted to do this one because I’m a big proponent of St. Louis,” Szabo said about attending the Roadshow. “I chose St. Louis out of all the U.S. cities.”

At a preview event pitch event on August 31 in St. Louis, Reynolds told the crowd that St. Louis is the epicenter of technology and innovation. “We need to tell the world who we are,” he stressed.

Bob Witterschein, the vice chairman of Enterprise Bank and Trust, told the entrepreneurs that they can be the role models for others and help foster a sense of community and willingness to help out someone for the sake of the whole, and not just themselves. His parting words: “Now go get some money so we can keep this going.”

The next Startup Roadshow will be Oct. 4-6 in Boston with a new set of 15 startups. After the success in New York, this may turn into a regular event, hitting major cities across the U.S. The Regional Chamber and Accelerate St. Louis are looking into the possibility of future Roadshow events.

“Based on early feedback, it seems to be something that makes sense to do,” Reynolds said. Thomson Reuters and Enterprise Bank are already partners who made the first event possible.

“So moving forward in the future getting the St. Louis corporate community behind this effort is extremely important,” he said. “Part of our mission is to share this great news across the business and corporate community so they know this is an opportunity worth supporting.”