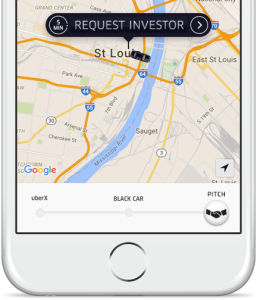 TechCrunch came to town Tuesday for a pitch-off at Ballpark Village. Judges heard 60-second pitches from 10 companies, then named Greetabl the victor. For winning, the personalized gift box startup earned $5,000 and a table at an upcoming TechCrunch Disrupt event.

FoodShare won a People’s Choice Award and $2,500 prize at The Mobileys, a mobile innovation competition run by Mobile Future. The startup headed by two Washington University students and a Darmouth College student will find out next week if it won the contest’s $10,000 grand prize. FoodShare donates free meals to families in need when users post photos from participating restaurants

Pikazo launched Monday on Product Hunt. The app, built by Noah Rosenberg and Karl Stiefvater, remixes your photos to appear as if they came from the paintbrushes of Picasso, van Gogh or Klimt themselves.

CrowdSource changed its name to OneSpace. The rebranding of the Metro-East startup, which outsources work to an online community of freelancers, comes with its development of a Software as a Service platform to complement the managed services it currently provides.

The Engineers’ Club of St. Louis will spend $3 million to rebrand and renovate the Central West End meeting space. The renovation project, designed by Reminger Design, is set to break ground in spring 2016. The club, which is the third-oldest engineering society in the country, will be renamed The Engineering Center of St. Louis.

For a couple of hours today, Uber will offer a new service aimed at entrepreneurs. Hail an UberPitch cab from noon to 2pm for an opportunity to nail a 15-minute pitch a venture capitalist sitting next to you in the backseat. Lewis & Clark Ventures, Cultivation Capital, Prosper Women Entrepreneurs and others have partnered with Uber for the program.

On Sunday, Dec. 6, SLU will host the second Real Elevator Pitch Competition, where 10 companies will pitch to 30+ business execs and qualified investors in the elevators of the second tallest building in Missouri, the One Met Square building. The top three pitches then have a pitch-off in the back seats of Teslas. First, second and third prizes win $2,500, $1,500 and $1,000; everyone else walks home with new some contacts and a week’s supply of Ramen noodles.