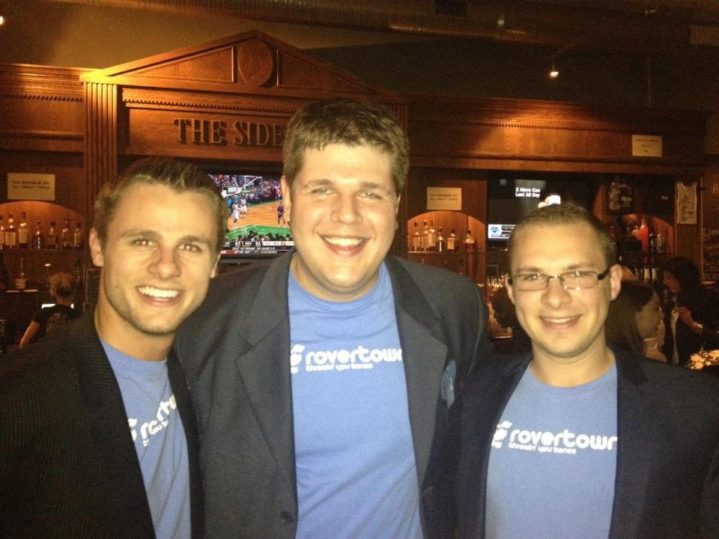 If creating a business that caters to college students looking to save money seems like a safe bet, the RoverTown team has certainly proved that notion right.

Founded at Southern Illinois University Carbondale more than six years ago, RoverTown was originally a plastic discount card started by Mike Philip, Founder and CEO, and two of his college classmates. After winning an Arch Grant in 2013, the company moved to St. Louis, where they now employ 30 people and offer a completely mobile student discount program on more than 100 universities across the country.

We checked in with co-founder Mike Rzeznik—who was originally attached to the company as an intern—about their Downtown moves and what’s coming up in 2016.

Remind us on how your process works: How do you onboard universities and businesses?

We partner directly with the universities, then we contact the businesses and get discounts in the market. Next we do some marketing strategies to let the students know that these discounts are available and that they are free to use.

We’ve used interns in the past, and this upcoming semester we’re hiring student ambassadors and campus marketing associates that will help with the marketing and the sales strategy, but most of our processes are automated. The school partnerships are very beneficial because it allows us to be known on campus as a trusted partner.

For the businesses, it’s a freemium model so companies don’t have to pay anything to start using RoverTown. Typically they’re fine with it.

With the free plan, businesses can only add one discount, this allows us to get more businesses in the area and the more discounts we have the more students start to use the app and continuously use it.

What’s been you biggest challenge so far?

A major challenge for us was product development. Originally, up until about a year ago, it was only me developing all of the software, and we have a ton of software, so it was quite difficult to manage the processes and make sure stuff was getting done in a clean fashion.

Since then, we’ve hired numerous programmers and in-house developers to help build out our software, essentially allowing me to delegate a lot of these different projects to different teams. That then allows me to focus more on architectural and system-based development.

It’s hard to find developers in St. Louis, so we start out all of our developers as apprentices and then teach them the ways of programming. Once they become more proficient, we give them more responsibilities and that helps everyone out.

People are learning, people are happy because they have ownership in the product, and it’s helped the company to become successful.

Probably the launch of our newest application. It has just a ton of new features and it’s the first app that wasn’t totally built by me in house.

We have a whole team working on it and everyone’s extremely proud of it. With a lot of new features it has caused adoption and engagements to go up exponentially.

You’ve been housed in a few Downtown St. Louis locations; talk about that growth a bit.

Originally we were in the old T-REX in the Railroad Exchange building. We had two offices, with Mike, Jeffrey and two interns who came on as sales people.

From there we hired on a few more people who were interns for us back at SIUC. When TREX moved to Wash Ave, we had three offices which a step up in that nice building.

We hired on apprentice developers that worked hand-in-hand with me, Jeffrey and Mike to build out their skills and build out the products that we needed while still being able to learn, utilizing LaunchCode, which is a great program.

Once we had six offices in T-REX, it caused a bit of an issue for us because with developers, it’s best if everyone’s in one space for better collaboration. T-REX was extremely accommodating for what we needed, but we were still rapidly growing and we essentially outgrew it.

At that point we decided to get our own office and build our own identity in St. Louis. So now we’re two blocks away at 316 N 8th Street where we have an open floor plan, which greatly helped our communication and developing process.

2016 is going to be very exciting. We’re going to start hiring more interns and more marketing and salespeople.

In the past we’d focused mainly on product, building out our software, making sure we were building features that students would use often and enjoy using. Now we are focusing on getting the word out that this software is available and launching to more universities.

We’re definitely focusing on marketing and hiring people. We’re expected to get quite a few more employees all depending on how our rollout goes.

It’s still a little bit of experimentation, but we’ve done a lot of experimenting and we’re confident that what we’re doing is going to be successful in these markets. There are a few other exciting things coming up, but we can’t talk too much.

And since you’ve worked all over Downtown, where’s your favorite place to grab lunch?

Oh man, there are so many places that just opened, but I’d go with Yiro/Gyro. They’re right next door to our office and I used to live in Greek Town Chicago, so I’m very picky about my gyros and their food is very tasty.

And favorite place to grab a drink?

The Over/Under Bar; I was actually a bouncer there once. Being right under T-REX, it’s always a fun environment.