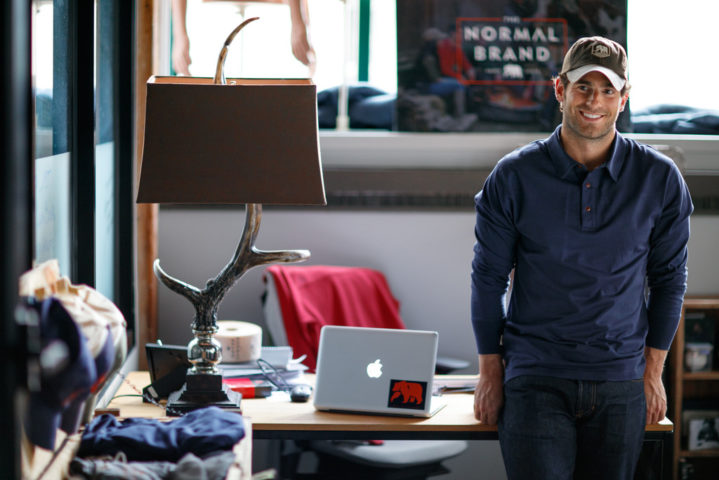 The Normal Brand is Making Life in the Middle Look Good

Jimmy Sansone is branding the Midwest—and making us all look good while he does it.

More often than not, “flyover territory” is influenced by coastal trends. But earlier this year, recognizing the need for “The Middle” to define a style as versatile as the lives of the people who live here, Sansone created The Normal Brand as a lifestyle apparel company.

Drawing from his own upbringing and experiences isn’t the only way he’s kept his company local. By setting up shop at T-REX and then growing into Industrious, he’s given downtown St. Louis a stylish point of pride.

Jimmy took some time with us to talk business, branding and iconic places in STL.

The Normal Brand is made for the Midwest. How would you describe our region in one sentence?

The Midwest happens somewhere between the city and the country. That’s exactly why I love it—because you can have the best of both worlds.

So take me for example: I identify with being from a city. I’m from St. Louis, but I have hunted, gone to farms and led a very active outdoor lifestyle my entire life. The Midwest is inherently versatile which I think makes it a lot better.

We know the coastal companies: Vineyard Vines, Southern Tide, Johnnie-O; why do you think no one really branded the Midwest before TNB?

I’m not sure why no one has, but a lot of people have come to me since The Normal Brand launched thanking me for celebrating the life they love here through TNB.

I think people may have gotten used to products being designed on the coasts and trickling down to us, that they just figured that’s the way it is. I’m very proud that The Normal Brand has gone against the status quo and looks to celebrate both the values and the lifestyle of the Midwest.

You started in T-REX, and recently moved into Industrious; why Downtown co-working spaces?

I was working in my parents’ basement and my dad recommended I get an office. He thought it would help with productivity and knew there is a sense of pride about having an office—he was exactly right—but I also had a small budget to work with.

So a good friend recommended T-REX. I moved in immediately to my tiny office and loved it.

There was an energy inside the building and a sense of hustle. Just across the street was the big bank I used to work for and here I was in a closet-like office working for no money—but I was proud of my space and the fact that I was going after something.

And there were a lot of people just like me. That’s what is cool about being downtown–young companies trying to make their mark. Soon after I got set up Downtown, TNB started growing.

Talk me through the growth from T-Rex to Industrious a bit. Long-term, where would you like to be?

Once we started adding people to the team, my space in T-REX was too small to hold us, so we started looking for other spots. We also wanted to move to a place where we could expand quickly if we needed to.

Industrious was perfect for us and we have already moved twice within Industrious to account for our growth. Eventually, we would like to have our own building with distribution and warehousing, so that’s a goal down the line.

Has there been any collaboration with other companies in T-REX or Industrious?

Even though I haven’t been at either office that long in the grand scheme of things, at T-REX it was just me, so being around companies like Tunespeak and Hatchbuck was really helpful. Luis Ortiz and Lynette Watson from the University of Missouri were my neighbors, and along with being a lot of fun, they were great resources. Industrious does a great job of encouraging a team environment as well.

I spend almost all of my time (at work and not at work) with my family and close friends. Most of my friends have been in my life for 10+ years. As the oldest of ten—seven boys and three girls—there are a lot of games to go to in the fall.

So on Friday nights, you can find me in whatever I wore to work—usually a pair of jeans, Nikes, our Henley, and a probably a prototype hat that I wear for a few months before deciding on—at my brother’s high school football game. Then on Saturdays, I’m either flying to watch my other brother play college football or watching it on TV with my dad and brothers. We also really like going out to our farm property and hanging out there.

Since you celebrate the Midwest, what do you view as some of the iconic locations, restaurants or events in St. Louis?

Well, we are heading right into probably the best time of the year in St. Louis. Fall in St. Louis is a total blast—especially when the Cardinals are in the playoffs. I’m a big sports fan, and the Blues are starting up in about a week, so I am excited about the TNB St. Louis Blues collection that will be debuting at Scottrade opening night.

A few years ago I got invited to a  Cardinal playoff game and Blues home opener in the same night—that was an awesome St. Louis night. I can’t remember, but if I went to Carl’s Drive-In for lunch that day—the day would’ve been off the charts. All of those places are iconic.

What can we expect from The Normal Brand moving forward?

Well, I already mentioned the TNB Blues Collection, but we have new products coming in throughout the fall including some really cool women’s pieces, backpacks, new hats, new T-shirts and a college ambassador program at universities throughout the country. Plus we continue to expand our retail footprint and are excited to be in the St. Louis Saks Fifth Avenue starting at the end of October.