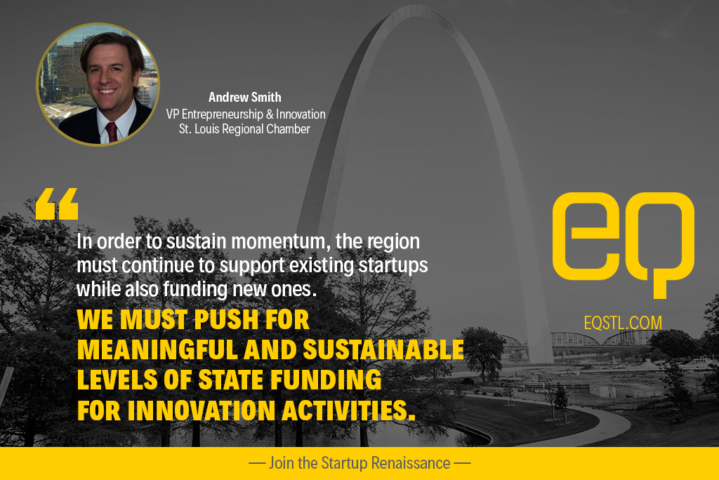 While the health of the ecosystem and the growth of startups are both strong, the report provides a warning based on a comparison with peer cities and nationwide trends in venture capital investment.

Over the last 5 years, there’s no doubt that St. Louis has cemented a reputation for hosting a thriving and dynamic startup community. In a new report released last week, the Regional Chamber looks into the venture capital and deal flow that keeps this ecosystem afloat.

The report dives deep into the local trends in Venture Capital investment and outlines how far the innovation ecosystem has come in recent years. Nonetheless, amidst significant progress, the report issues a warning that significant investment challenges lie ahead.

The report highlights the continued inflows of risk capital to the city and the positive growth in the number of new firms. Since 2013, total venture investment in St. Louis has increased by 256%.

However, this growth has not been consistent; the number of VC funded deals has fallen by almost two-thirds since peaking in 2015. In another insight, the St. Louis region saw the average deal size balloon from under $2MM in2012 to over $7MM in 2017 – a trend, the report notes, “that could signal a decreased appetite for risk among investors.”

Fewer deals for more money could mean that overall capital investment is moving to later-stage and more established companies. This could signal that investors are adopting more cautious and less risk-driven mindsets. This trend of deal flow moving toward more mature startups over seed-stage companies is occurring not only in St. Louis, but all over the U.S., and could potentially lead to stunted growth, the report states.

The report underscores that the startup ecosystems in St Louis is at a critical inflection point. While other “peer cities” are ramping up investment in their startups, St. Louis is behind in terms of VC investment per capita.

Now that many startups are in the process of scaling their businesses, this lack of funding will affect their attractiveness to outside investors and may result in fewer exits overall. While startups in St. Louis are overall providing job growth, there are relatively few exits, and therefore less promise of a healthy return on investment for prospective investors.

The report does mention several contenders for a break-through exit within the few months that could help fuel more capital investment.

“There are a number of high-growth, high-momentum companies that have emerged from St. Louis’ startup scene and are poised for potential exits at some point in the next 18-24 months: Varsity Tutors, Lockerdome, Plastomics, Gainsight, NewLeaf Symbiotics and Finlocker to name just a few. All of our accelerators report rising portfolio values. One of the best things that could happen for Greater St. Louis would be for some of these companies to break through and return capital to their founders, employees, and investors.”

A Predominance Of BioTech

The region has a heavy reliance on Biotech. While Life Sciences and Ag Tech investment categories continue to be bolstered by funds from BioSTL and other incubators, professional and technical services lag noticeably behind.

Biotech is one of the areas in which the St. Louis region excels–making it natural that the biotech startup community to thrive in this space. Rather than taking away the funds allocated to biotech, an effective solution would be growing the capital pools dedicated to other investment categories, like fintech.

Of course, this solution would require an overall increase in funds, which speaks to another one of the ecosystem’s problems: its share of total VC funding in the U.S. is not increasing.

St. Louis ranked 19th in the country for total Venture Capital investment, having received 0.40% of total funds in 2017. A closer look at this ranking reveals the reality that St. Louis is up against intrinsic disparities in venture funding; 80% of the funding is concentrated in just 10 metro areas, where location and proximity to a healthy pool of investors and entrepreneurs play a key role.

“In this respect, St. Louis is like nearly every city outside the venture hubs of the Bay Area, Boston, and New York. We are waiting to harvest the fruits of our work over the last decade.”

On one hand, St. Louis startups have never let the fact that the majority of venture capital investment money is concentrated on the coasts discourage them; in fact, for businesses in investment categories like cybersecurity, the less-crowded marketplace in St. Louis acts as a selling point and for AgTech startups, a dynamic and dense industry cluster supports them. For many founders, St. Louis makes up for its lack of large-scale investors with its many opportunities for mentorship and a supportive, tight-knit startup community.

However, if St. Louis hopes to compete against other Midwestern cities, the St. Louis region, and ideally, the state of Missouri, will need to step up their funding game. St. Louis provides excellent resources for startups in their seedling phase, but now, as many business look to grow, there is a need for late-seed capital that will keep those initiatives going and prevent them from falling into what is called the “valley of death”–the place where startups are financially abandoned and unable to raise more capital midway through their ventures.

Since large coastal investors tend to invest in deals closer to home, the Missouri government could play a critical role in making up for this regional disadvantage. Restoring a matched investment program like the MTC Idea Fund or the aborted Missouri Venture Fund would go a long way to ensuring investors, entrepreneurs and talent that their time and investments are part of a larger regional effort for success.

“In order to sustain momentum, the region must continue to support existing startups while also funding new ones,” says Smith. “We must push for meaningful and sustainable levels of state funding for innovation activities. We must continue celebrating successes and supporting the organizations that serve as the ‘aquifers’ of innovation.”

Maisie Heine
Maisie is a graduate of Washington University in St. Louis majoring in English Literature and minoring in Communication Design. With a diverse set of experiences working in journalism, publishing and public relations, she approaches each assignment a little differently but always with an eye for detail. On the weekends, you can find her either on the squash court or at a local cafe.