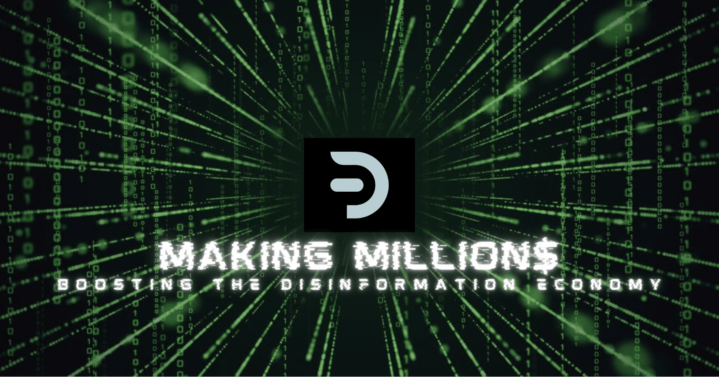 Following the recent revelations that LockerDome has been funding Alt-Right websites and ignoring requests for comment from Reuters and the Gateway Journalism Review, I decided to investigate just how deep the rabbit hole goes. Sadly, I’ve got bad news: there is no bottom.

I estimate, conservatively, that LockerDome – the well-known and well-funded AdTech startup from St. Louis that changed its name to Decide Technologies in February 2022 – is paying out at least $1,700,000 per month in regular commission payments to at least 115 Alt-Right publishers who form the most visible segment of their online advertising network.

Over the last seven years, the total paid out to these sites – peddling racism, hate and disinformation – could be more than $100 million.

All of the conclusions below follow an extensive analysis I conducted of LockerDome’s online advertising network using the competitive intelligence tool, SimilarWeb. You can browse through all of the research data in this Airtable, which is also embedded as a gallery below.

The gallery view shows the Alt-Right websites still using Decide. It includes audience and popularity statistics, plus screenshots of many of the LockerDome ads themselves, highlighted in red.

I estimate, conservatively, that LockerDome – the same AdTech startup from St. Louis that rebranded to Decide Technologies in February 2022 – is paying out at least $1.7 million per month in regular payments to at least 115 Alt-Right publishers who form the most visible segment of their online advertising network. Less conservatively, LockerDome may be paying out as much as $3.97 million per month.

At Least $20M Per Year Spent on Alt-Right Publishers

On an annual basis, this translates to between $20 million and $47 million in spending on Alt-Right websites. It appears that LockerDome has been partnering with Alt-Right sites for about seven years,  during which the number, size and popularity of Alt-Right sites has appeared to grow steadily. The total LockerDome has paid out to these sites during this period may easily surpass $100 million.

The advertisers who use LockerDome to place their ads on the 115 sites are probably spending between $2.2 million and $5.2 million per month to do so. If standard industry practices are being followed, the publishers of the websites are getting 68 percent of these funds. LockerDome, in turn, is likely taking 32% in commission, generating direct revenue in the range of $0.54 million to $1.27 million a month from running ads on just these 115 websites.

That means Decide Technologies’ revenue from business conducted across just these 115 sites can be conservatively estimated to be somewhere between $6.53 million and $15.24 million a year.

To put the annual numbers in context, according to the St. Louis Business Journal, prior to rebranding LockerDome “reported trailing 12-month revenue of $25.8 million” for 2020 and more recently touted revenues (N.B. not profits) of “more than $30 million in 2021.”

Put another way, a substantial part – possibly as much as half – of last year’s revenue might be accounted for by these 115 websites.

A Quick Note About Definitions

To be clear, alt-right and far-right are the same thing. However, because my analysis pertains to on-line activities only, and due to the fact that Alt-Right is the name given to online activities that loosely connect the far right, I have chosen that term for my report.

Also, as Lockerdome rebranded to Decide earlier this year, I want to make it clear that even if I alternate between names, I am still always referring to one and the same entity: the AdTech company in St. Louis, which has long been considered a model for our startup ecosystem.

As a general rule, I will refer to “LockerDome ads,” because the design of their advertising has not substantively changed since rebranding to Decide. And when referring to the company, I’ll say “Decide Technologies” or shorten to “Decide” as that is their official name today.

No Pun Intended … These Are Extremely Conservative Estimates

In fact, there are plenty of reasons to believe that nearly all of Decide Technologies’ revenue is coming from the monetization of Alt-Right sites.

One reason: I have deliberately restricted my calculations to 115 websites where I was personally able to visually confirm that they were displaying LockerDome ads. But Decide may be serving ads to many more alt-right sites that I didn’t discover. It is worth noting that many more Alt-Right sites that are not on my list of 115 actually declare LockerDome as an approved online advertising vendor in their so-called “Ads.txt” files, where they disclose such relationships.

Second, LockerDome can monetize email newsletters, which don’t factor into these calculations.

Fourth, there is no way of knowing what the revenue share split actually is between LockerDome and their publishers, so I opted to use Google’s standard terms of 68% to the publisher and 32% to their advertising network, AdSense.

But for extremely popular sites, revenues can scale to as much as $279,000-$650,000/month. Alt-Right sites like the St. Louis-based The Gateway Pundit (TGP), boast an audience size of 31 million visits a month. In aggregate TGP readers consume as much as 93 million pages of content a month, with each user reading an average of three articles every time they visit the website.

To put those numbers into context, TGP has an audience half as big as the 89-year old brand Newsweek magazine, which generates 66 million visits a month. The TGP audience is almost three times as large as the audience for Stars & Stripes, which is the official newspaper of the U.S. Army.

Here’s a little primer on how LockerDome makes money.

It starts with LockerDome paying publishers to inject a bit of javascript code into the source code – part of the computer programming – of the publisher’s website. This is the digital equivalent of a traditional print publisher reserving specific pages or sections, such as the “inside cover” or a “double page-spread” in the middle of a magazine, before sending it off to the printers.

As a result of this insertion, Lockerdome “ad units” are placed on their publications.

When someone using his or her desktop or mobile phone visits a website with this code installed, the code automatically executes. In so doing, it triggers the display of an ad space on the website within which Lockerdome can place – “serve” in the industry’s jargon – any advertisement from its customers.

These customers are any company or organization that wants to advertise in any of the digital ad spaces LockerDome controls. The sum total of all these digital spaces, spread across the hundreds of publishers running LockerDome’s javascript code, is called an “ad network.”

It is what LockerDome has to sell. Every time a visitor to a publisher in LockerDome’s ad network goes to that website, an ad is digitally placed.

Money changes hands based on “impressions,” which is the industry term for the number of times a particular ad is shown. The total depends on the popularity of the website. Placements are priced on a “cost-per-thousand” basis, a metric known as CPMs. The higher the number of impressions, the more the advertiser pays the publisher and the higher the commission that goes to the adtech firm – like LockerDome – that’s in the middle.

According to Wayback Machine, a website that archives the World Wide Web that can be used to trace past online activity and relationships, LockerDome’s ad code first appeared on The Gateway Pundit (TGP) on February 26, 2015, three months after the St. Louis adtech startup raised $10M in a series B funding round and six months after the period of Ferguson unrest started in August 2014.

Now, however, LockerDome/Decide ads are NOT consistently displaying on TGP. According to Wayback Machine, the last day that LockerDome code was explicitly visible on the site was March 28, 2022.

However, it could also just mean that either party has found a way to conceal the code, which would be in character for this particular St. Louis AdTech startup.

According to researchers at Northeastern University, LockerDome showed itself to be quite adept at circumventing Ad Blockers. The researchers also reported that some Alt-Right publishers in LockerDome’s network use a special digital container called ‘customads.co’, which seems to hide the connection to LockerDome in the website source code.

This summer, technical information came to light on Twitter that suggests that Decide is able to resell other ad networks within its own network and vice versa. That means, another ad network could place LockerDome ads branded to their own network, such that both parties make money off those sales, and all the while, leave no trace of LockerDome/Decide’s own role in the transaction.

Until they vanished in late March, LockerDome ads were visibly running on the TGP site. The timing of the change is notable, as it is less than a month after LockerDome rebranded to Decide and within four months of the original Reuters report that identified LockerDome as an ad network for The Gateway Pundit, which was published in December 2021.

If LockerDome severed the relationship, it would have required considerable will, considering the money involved. Perhaps the company thought the reputational damage from the relationship more than compensated, and wanted to keep its new brand, Decide, unsullied. Absent comment from the parties, it’s impossible to know.

Thanks for reading EQ. If you’d like more, please consider subscribing to our newsletter or you can follow developments on this story below: