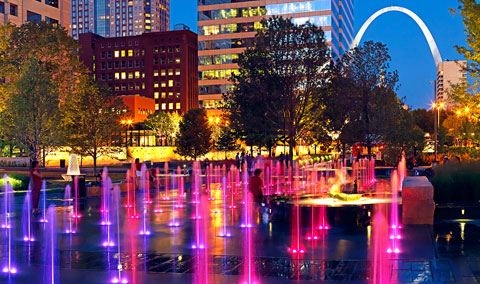 St. Louis, home of the Gateway Arch on the bank of the Mississippi, may be far from Silicon Valley, but don’t tell all the startups they’re in the wrong place. This article originally appeared on Geektime. This article was originally posted by James Gaskin on GeekTime.

French fur traders found a nice spot on the Mississippi river and started the city of St. Louis back in 1764. Growth of river traffic built up the city to the point there are nearly three million in the city and surrounding area.

Forward-thinking business and government groups got together to build upon the pharmaceutical and financial enterprises based in St. Louis. The Missouri Technology Corporation, along with multiple funding sources from angel to Series A to mature startup venture capital has built a thriving startup culture that keeps growing.

The largest river system in America, the Mississippi, along with its central location and educated workforce will keep St. Louis an important entrepreneur magnet for the next few decades at least. No less a research site than FiveThirtyEight.com called St. Louis, “The New Startup Frontier.” And there’s an arch in a lovely park by the river.

Acute kidney injuries occur in 35-70 percent of critically ill patients while in intensive care, because the kidneys filter everything inside the body. MediBeacon uses a proprietary blood agent that shows kidney damage one to three days sooner than current blood tests. Although not yet approved for general use, MediBeacon’s monitor and tracer agent have successfully completed initial clinical studies.

Founded in 2011 to commercialize a range of new diagnostic tools using optical technology, MediBeacon’s first funding round in March 2013 included three investors (amounts not disclosed). Since then, close to $41 million dollars have been placed with them from five investors. This includes their largest transaction, $10 million, in March of 2017.

Sure, online ads can be annoying, but that’s where the eyeballs are, drawn to smartphones and tablets rather than televisions. LockerDome created tiny interactive software widgets that give content providers and advertisers enhanced tracking tools and customer engagement options. At this writing, LockerDome’s clients have better interaction than before with over 100 million people per month.

Starting back in the early days of the Great Recession in July 2008, LockerDome received an undisclosed amount of seed money from one investor in September of 2011. Cultivation Capital and their group of investors have pitched in over $17 million of their total $19.09 million in funding, with their biggest placements in March of 2013 and December of 2014 ($6 and $10 million). The last cash infusion came in June 2016 for $500,000.

People love to shop, but all too often, according to retailers, they prefer shopping on their phones rather than in stores. So Aisle411 uses smartphones to make shopping in Real Life much easier, faster, and cost-effective using inside maps just like folks use their navigation systems outside. The shoppers find what they want faster, and they get enticed by new ads that popup as they pass by merchandise. Reports tell retailers where shoppers go and which instant ads get their attention.

Nearly $10 million in venture funding says Aisle411 has some good ideas. Founded in April 2008, Aisle411 received an initial angel placement of $2.1 million in November of 2011. Four rounds later, in September 2013, Cultivation Capital pitched in another $6.34 million on top of an earlier investment.

Big Data is Big Business, and VelociData helps customers wrangle data into business analysis and recommendations. It doesn’t hurt that IBM found 49 percent greater revenue growth from 2007 to 2012 in those companies embracing analytics. VelociData’s Vortex product provides data integration for markets including financial services and enterprises, and can capture real-time telemetry and billing information. Their Raptor products treat IoT devices as data streams for Big Data, giving companies control over more information than ever before.

Their funding started big, with $10 million in July 2013, a year after being founded. Since then another $5.1 million in venture funds and debt financing boosted their bankroll.

Small and medium businesses, and marketing agencies, have multiple free or cheap CRM solutions available to them. Hatchbuck steps up the CRM game into a complete marketing software suite that automates follow-up, manages contacts, and tracks success as your customer base builds.

Development started in 2011, boosted by Cultivation Capital’s October 2012 angel round of $775,000. Five more rounds, the last of which was $4 million Series A funding, again from Cultivation Capital, bring the confidence-building total up to $12.6 million.

Bigger companies need sales help, too, and TopOPPS focuses on bringing clarity, efficiency, and predictability to their sales pipeline and sales process. They also provide training and guidance for better sales with multiple guidebooks and regular webinars.

Starting fast in 2014 with $700,000 seed funding from Cultivation Capital, TopOPPS has received $6.31 million total after five more venture and seed rounds. The latest placed, over $511,000, happened in December of 2016, so investors keep funding what they see as a winner.

One of the higher-profile startups in St. Louis, Bonfyre helps companies build culture, bring employees together, and keep worker engagement high and focused on improvements. Make your own jokes about keeping distracted millennials on track, but companies like Southwest Airlines, Marriott Hotels and Resorts, and Verizon use their services.

Investors seemed hooked as well. Starting in January 2012 with a seed, a tiny seed at that, of $50,000, Bonfyre has received nine more placements of seed, Series A, and venture investments for a grand total of $9.71 million. That will get the attention of even the most jaded millennial hipster.

Speaking of millennials, companies need to recruit them to replace all the retiring Baby Boomers. One company helping them transition from Boomer to recent graduates is the aptly named Better Weekdays. They work with top universities, employers, and directly with students and alumni to find the right spot for the right graduate at the right salary.

Patent law is big bucks for businesses and the specialty law firms that serve them. By digging into the treasure trove of information from and about the US Patent Office, Juristat gives their clients insight that translates to more frequent patent approvals and better research during legal challenges.

Over $1.6 million dollars have been provided in seed funding and grants to Juristat since they started their quest to demystify the Patent Office back in February 2012. Seed funds and grants started small with $160,000 in June of 2013. Business must be doing well, however, since the latest round of seed funding in January 2015 totaled $1.2 million.

St. Louis certainly qualifies as being the “heartland of America,” a phrase still filled with respect in the majority of the country. So an industrial painting company that provides quality control and documentation using software on an iPad fits right into the hardhat ethos. But it has a modern twist, as TruQC provides their job-site documentation reports, including Weekly Environmental Reports, via the cloud.

Almost $2 million dollars’ worth of funding found the way to St. Louis and TruQC. Two years after starting in 2011, TruQC received a $150,000 grant in November of 2013. Almost three years after that, in June 2016, venture funding of $1.7 million was placed. Nice payoff for an interesting mix of blue collar painting and white collar cloud-delivered software.

This article originally appeared on Geektime.