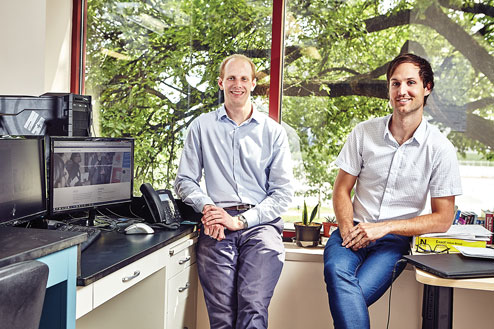 In January 2013, their second year of the M.D.-Ph.D. program in biomedical engineering at Washington University, Stephen Linderman and his classmates made two critical observations: First, clinicians had persistent medical problems they wanted to solve. Second, their class consisted of an unusually high number of biomedical engineers—six or seven as opposed to the usual one or none at all.

“Coming from an engineering background, our perspective was, why don’t we make it better by the time we practice?” says Linderman, now president of Sling Health Network, formerly known as IDEA Labs.

The resulting organization was called IDEA Labs (the founders changed its name in September). It began as a WashU student group in 2013 and became an incorporated nonprofit in April 2014 with a three-pronged mission: solve medical problems, train innovators and improve healthcare. To that end, the program brings together interdisciplinary student teams with the intent to create startups that produce solutions.

The organization took off on WashU’s campus right off the bat: “Even within the first week it became a much broader thing than an interest group,” says Linderman, who adds that it grew to include biomedical engineers, medical students, business students, law students and other types of engineers. “We really are bringing together people from the entire campus.”

But it also grew geographically: Sling Health’s St. Louis teams now boast students from SLU and UMSL, and due to the universal issues it seeks to solve, Sling Health organically expanded to branches in Boston, Philadelphia, Minneapolis, New Orleans and Ann Arbor.

To keep up with the rapid expansion, Sling Health moved into [email protected] in 2014. Linderman says the change of scenery was more than just cosmetic: It enabled students to get off campus and start figuring out how to get their solutions implemented clinically.

“We wanted teams to see it not just as an academic project, but as something much more tangible,” he says, adding that the neutral location offers up a greater pool of talent for the ambitious students. “Teams inevitably need particular skill sets they can’t find at a single university. By bridging campuses across the city, we are able to start satisfying those skill niches.”

Since its inception, Sling Health has ushered 59 teams through the program, with 14 spin-off companies. Linderman says that so far, these companies have raised almost $2.5 million in outside funding.

One such success story is DataDog Health, a company created in 2013 by a WashU engineering senior at the time, Elizabeth Russell. Her Mindset app is a fitness tracker for mental health.

Russell met her first investor at Demo Day, the program’s capstone event where the graduating class has an opportunity to present business plans to potential investors. This past April, six companies pitched, and eight more companies displayed posters and provided demos. Ten additional companies from previous cohorts, including Epharmix and DataDog Health, provided demos as well.

Another Sling Health-spawned startup, UroStat, really demonstrates the spirit of Sling Health: A urologist had noticed that one of the most critical vital signs following a kidney transplant—urine output—wasn’t being measured systematically, but visually by a nurse.

“He thought, ‘Well, why can’t we automatically measure urine output?’” says Ian Schillebeekx, currently president of Sling Health’s St. Louis chapter. “He came to Sling Health and we provided some tools and funding to create a prototype, as well as mentorship to guide the ideation process.”

Now, that missing piece exists—and the medical field, and patients, are better for it.

Both Linderman and Schillebeekx agree that the success of Sling Health is in large part due to WashU agreeing to wave intellectual property ownership of anything resulting from the program. “That allows us to motivate students because they realize that they’ll be able to move forward with the technology as they see fit and not have to give up a large portion of ownership to the university,” Linderman says.

Schillebeekx adds that there’s also an important psychological benefit to it for budding entrepreneurs. “WashU could have said, ‘Just give us 2 percent,’ which may not seem like a large percentage. However, as a participant entrepreneur, it’s a great incentive to know that I own everything I do in this program. That was a very progressive step for WashU to take, and it has been very fruitful.”

“As we looked around the country, we realized that not having a format to solve these medical problems was a problem that almost every university in the country is facing,” Linderman says. “There aren’t good ways to bring together talent from different backgrounds with the right resources and mentorship to create new technologies, assess whether it has any commercial and clinical potential, and then get it out to be useful for patients.”

“That Sling Health has received attention and support from the AMA speaks to the level of dedication and hard work of WashU students,” says David H. Perlmutter, M.D., executive vice chancellor for medical affairs and dean of Washington University School of Medicine. “The students’ entrepreneurship and their creative, ever-evolving approaches stand to benefit so many, given the range of problems in health care these teams are tackling.”

Although by almost every measure, Sling Health has led to many successful spin-off companies, Schilleebeekx emphasizes that that isn’t the whole story. Although the program is most active during the academic year, its doors are also open all summer.

Sling Health offers internships that run through the summer and provides resources as needed to graduated companies.

“We’re trying to design this program to be a safe place for students to learn how to innovate and become entrepreneurs, so it’s really more the case that until the team has its own wings to fly, they are still welcome to get resources and can get our help,” says Schilleebeekx.

“We sublease our space to a lot of our graduated and funded teams–at a loss to us–so that they are able to have a longer runway. We aren’t hands-on supporting them, but we are subsidizing their success.”

Sling Health also contributes to the growing entrepreneurship ecosystem in St. Louis. It creates deal flow that wasn’t there before and gives young talent a reason to stay in the city.

National expansion aside, Sling Health’s next step is to continue growing the program—the first cohort included 10 participants, and last year there were 140. Corporations are also looking at how the program could solve business problems outside of the medical field.

“Sling Health provides students an opportunity for innovation and invention aimed at advancing medical and health technology,” said Aaron Bobick, dean of the School of Engineering & Applied Science at Washington University. “Going forward, that coupling of engineering with the School of Medicine increases both the impact and visibility of what we do.”