2018 Marks a Year of Partnerships for Sling Health

Sling Health, a student-run non-profit, was founded in 2013 at Washington University in St. Louis as a biotechnology accelerator. After five years of operation, Sling Health continues to amplify its influence through developing local partnerships and Sling Health chapters at other universities across the country. 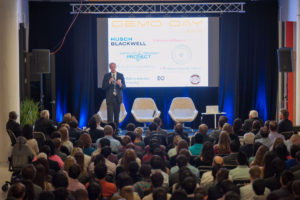 This past April, Sling Health’s 2018 Demo Day featured six healthcare-focused companies. All six won legal support from Husch Blackwell, and the top three winning companies were awarded between $1,000 and $5,000 in prize money.

The overall business case for solving healthcare problems was well represented by David Grant, MD, in his startup pitch for the competition when he told the audience assembled, “today, in the operating room we’re doing amazing things, and yet coordinating that surgery is done by archaic technologies. These bad technologies represent a three-billion-dollar opportunity for our company.”

In the demo, Grant and the team at his startup called OpComm, went on to describe the experience of a person arriving at a hospital or surgical center for a procedure, the numerous teams of people involved (for example, anesthesiology, multiple surgical teams, nurses) and how challenging it is for those teams to collaborate.

The problem statement must have resonated with other medical professionals as the startup went on to win third place in the competition. OpComm’s product is a mobile app that replaces manual communication processes, such as handwritten, color-coded paper notes taped to the door of the Operating Room, with a digital solution.

Building Off the Problem Statement

Rick Shang, Chief Communications Officer at Sling Health, emphasizes that although in the digital age, a mobile app seems like an obvious solution to the current state described by OpComm, that isn’t the point. Simply identifying the right kind of problems to tackle is the primary goal of the medical technology accelerator.

Sling Health projects start with a problem that is then carefully analyzed by the project team before determining what the solution should be.

“We don’t come with solutions. Instead we collect complaints in our daily conversations with medical practitioners,” explains Shang. “We ask ourselves, why is this frustrating, why is this a problem? Sling Health then vets the problems with mentors from academia as well as industry, doing a high-level check to make sure it’s an real problem that that could benefit from a good commercial solution. If the answer is ‘yes,’ the problem is added to the Sling Health ‘problem bank.’”

Sling Health does not do in-depth research on the problems in the “problem bank” to see if anyone is already addressing it. Instead, the first part of the program is to validate that the problem exists and assess the viability of commercializing a solution.

“We intentionally do not do this kind of check because we think it’s very important for students to learn to do research, to know who the competitors are. That is one of the very first milestones for them to hit,” Shang says. “They have to show that they understand the market.”

Timeline for a Sling Health Project

Sling Health projects kick-off in the Fall, with potential team leaders submitting their intent to take on a problem. Over a weekend, Sling Health determines if the team leader is ready and able to lead a team. Once confirmed, team leaders have a week and a half to formalize their approach to solving their problem before meeting with mentors to solidify the approach. They have another week to finalize a presentation of the problem with the intent of forming a team.

Project teams are made up of a variety of types of students. Business, law, IT, public health, and social work have all participated. The teams can also include a mix of graduate and undergraduate students.

“The ideal 5-person team is a mix of health industry background and all the skills you might need within a startup,” Shang says.

With the support of Sling Health and their mentors, the teams work on the problem all year and then compete for prizes at demo day in the Spring.

Sling Health’s successful model rests heavily on its ability to provide strong mentorship and support to the student teams. They can do this in part through their partnerships with mentorship resources to assist during the program and these resources can lead to post-graduation support.

In 2018, Sling Health is expanding upon existing partnerships and creating new ones to extend the success rate of its companies.

In September, Sling Health and the BJC HealthCare/Washington University School of Medicine Health Systems Innovation Lab announced a partnership that expands the types of problems students have access to in the “problem bank.”

Rather than just the specific complaints heard from health practitioners, this partnership will expose students to larger, system-wide problems with health care delivery such as using personalized and community health data, moving the delivery of care closer to patients, and working closer with patients in health care decision-making.

The Information Technology Entrepreneur Network (ITEN) has been a resource for Sling Health since inception. They work with entrepreneurs and corporate innovators to scale viable tech ventures.

Connie Gallagher, Business Development Manager at ITEN, works closely with the student teams. “ITEN is very excited to partner with Sling Health. Together we support student innovators in the proof of concept and commercialization processes including exploring collaborations with our Corporate Innovation Program (CIP) partners”

A partnership with STL Partnership is in progress. This organization provides a regional and national network for series A funding as well as general business development assistance. This partnership is likely to be a significant source of support for student teams after completing the Sling Health accelerator.

Soon after Sling Health started at Washington University in 2013, they expanded to other universities across the country.

They started chapters in 2015-16 at Penn State and at Harvard/MIT, University of Michigan and Louisiana State University/Tulane in 2016-17, acquired Forge Health in Atlanta and added Georgia Tech and Emory in 2017-18. This year Sling Health chapters have been established in UCLA, Cal Tech in Los Angeles, and Texas Tech in Lubbock, Texas and Drexel University in Philadelphia.

With its existing partnerships and its broad and growing national access to health problems, practitioners, and mentors, Sling Health promises to continue revolutionizing healthcare, one student entrepreneur team at a time.