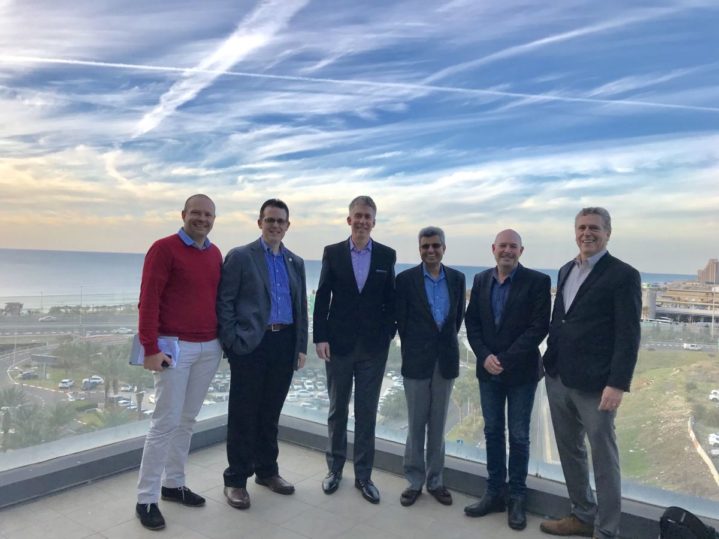 The delegations represent three industries that are not only among St. Louis’ fastest-growing, but are also seen as cornerstones of St. Louis’ economic competitive advantage: digital health, cybersecurity, and financial technology.

The delegations are organized by GlobalSTL, an initiative of BioSTL that seeks to attract high-growth international companies to St. Louis, in partnership with SixThirty.

GlobalSTL has achieved a string of successes bringing Israeli companies to St. Louis, and these most recent trips reflect their ambition to turn those victories into a permanent pipeline for economic development.

The trips come as years of investment in the Israel-St. Louis relationship are paying undeniable dividends.

In the last three years, “five cutting-edge Israeli startups have established their U.S. bases in St. Louis, creating 56 direct new jobs with an average salary of $77,600, plus an additional $12,000,000 in local capital investment,” reports Donn Rubin, President & CEO of BioSTL, and founder of GlobalSTL.

“Moreover, these companies are recruited to Missouri at a point when they are poised for future growth that can occur in our state,” Rubin continued.

For Israeli tech companies, St. Louis is a foothold from which to reach the entire North American market: each company has the potential for continued growth and expansion in the city.

Aligned around emerging industries, a relationship poised for growth

If each company that locates in St. Louis has the potential for explosive growth, GlobalSTL sees the same potential in the Israel-STL relationship as a whole.

St. Louis has major corporations and research organizations in each industry, and one of GlobalSTL’s main objectives is to market the city by raising awareness about the institutional heavyweights that are based here.

“More Healthcare Buying Power than Boston, Cleveland, or Philadelphia,” declared a flyer from one of the healthcare delegation’s events. The event also featured representatives from Washington University School of Medicine’s Institute for Informatics (I2) and BJC HealthCare’s Innovation Lab.

Locating close to institutions like Wash U and BJC provides health startups with a base of enterprise customers, an established high-skilled talent pool, and opportunities to refine their products with feedback from industry leaders.

And with a deep bench of startups in Israel — more than 400 in the digital health space alone — GlobalSTL sees massive potential for the relationship to continue to grow.

“The connections we’re helping to make for Washington University and BJC Healthcare with top Israeli hospitals like Rambam Health Care Campus and Sheba Medical Centers is elevating the St. Louis-Israel engagement to a new level, establishing a long-term relationship between innovation powerhouses in both countries. During this trip, we are establishing a dedicated pipeline of innovation to benefit St. Louis healthcare systems.”

Luke Babich
Luke came back to St. Louis after graduating from Stanford in 2016, and is active in city politics and real estate. He enjoyed a brief stint as Community Voices Editor on EQ and a digital strategist at Longneck & Thunderfoot, before co-founding his own real estate startup in St. Louis, Clever Real Estate.