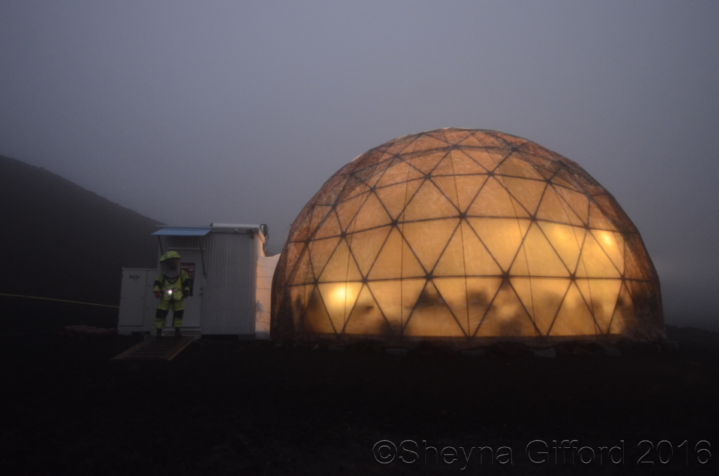 Sheyna Gifford, MA, MSc, MD, sums up the job of the HI-SEAS crews succinctly, “Go to Mars, grow food, do science, don’t kill each other.” Needless to say, that was quite a departure from her typical job description as a practicing physician at Barnes-Jewish Hospital in St. Louis.

In August of 2016, the six-person crew she had joined a year earlier — the crew of the HI-SEAS IV — emerged from a geodesic dome perched at about 8,000 feet elevation on the side of Hawaii’s Mauna Loa volcano and took their first breath of fresh air in a year.

The 1,200 sq ft fabric habitat had been their home for the previous 12 months and, over that period, they had seen no humans except those in their test group, living in close quarters without access to outside air or fresh food aside from what they could grow.

All communication with the world outside of their dome was electronic and subject to an artificial 20-minute delay. They never traveled more than two kilometers from their isolated home.

“It is kind of like having roommates that just are always there and you can never escape them, so I’m sure some people can imagine what that is like, and if you can’t then just imagine never being able to get away from anybody,” mission commander Carmel Johnston told the BBC, reflecting on her time in the habitat.

The HI-SEAS, or Hawai’i Space Exploration Analog and Simulation, project is designed and led by Cornell University and the University of Hawai’i at Mānoa. The NASA-funded research program is exploring the possibilities of human colonization of Mars.

Situated on Mauna Loa’s naturally barren, volcanic northern slope, the HI-SEAS habitation site replicates as closely as possible the inhospitable landscape of Mars. Of course, on Hawai’i, there’s regular Earth gravity and atmosphere, respectively two times and 160 times what they would experience on Mars.

Most of the day-to-day activity of the research subjects focused on maintaining their bodies and their station: food preparation, exercise, equipment testing, and tracking resource utilization. They were also allowed to leave the dome in “spacesuits” to conduct mock field experiments – experiments of the type that will one day be the purpose of these trips to the red planet.

Data gathered from the resulting crew interactions and behavioral patterns in these tests will be vital to planning actual missions to Mars in the years to come. Other HI-SEAS missions have covered similar ground, but what makes HI-SEAS IV special in particular is its length: it is NASA’s longest U.S. space simulation mission to date.

A St. Louisan on Mars

Dr. Gifford was selected from hundreds of candidates to be crammed into the HI-SEAS dome as a crewmember for its fourth mission. She served as the team’s physician and documentary journalist.

“It turns out that people… are the big X factor in space travel,” she says. “In the known universe, people are the unknown. A machine can only break in so many ways… People are constantly inventing new ways to break themselves and each other. Space scientists… would like to be able to predict when this is going to happen, how and why.”

Dr. Gifford is one of St. Louis’ own, currently she is a practicing physician at Barnes-Jewish Hospital. In the past, she’s worked as a neuroscientist at Brown and Harvard Universities and at Massachusetts General Hospital and has advanced degrees in Medicine and Biotechnology.

She’s a prolific writer and a member of the Missouri Civil Air Patrol air force auxiliary. At the Saint Louis Science Center, where the scientists of tomorrow have a hands-on opportunity to learn about space travel and Martian exploration, Gifford has served as scientist-in-residence.

Before the HI-SEAS program, Dr. Gifford was working on projects from Martian spacesuit design to satellites as early as 1997. She got connected to the Hawaiian project after participating in a smaller simulation study directly through NASA.

Funding of projects like HI-SEAS is a small part of a much larger, multi-decade plan at NASA. According to their website, “NASA is developing the capabilities needed to send humans to an asteroid by 2025 and Mars in the 2030s.” These are directives of the U.S. Congressional NASA Authorization Act of 2010 and of the U.S. National Space Policy.

“Mars is a rich destination for scientific discovery… and human exploration as we expand our presence into the solar system,” the official site claims. “Future exploration could uncover evidence of life, answering one of the fundamental mysteries of the cosmos: Does life exist beyond Earth?”

Gifford has since become a booster for Humanity’s efforts towards colonization of Mars. In a TEDx Talk hosted at the UMSL Touhill Performing Arts Center, Gifford made an impassioned argument that we need to rethink our concept of what makes a person “Astronaut Material.”

“I’ve learned that the practical aspects of life in space are the most critical ones to success: the cooking, the cleaning, the communicating back to earth, culturing food, repairing electronics. The further… out we go,… the more valuable people with expertise in these skills are to the space effort. That is a radical change from the way we started in space… It started as a military operation,… now it’s a scientific one… soon,… people from more diverse walks of life will be staying longer and longer in space to support our life here on earth.”

Most of us would probably say, “no.” But Gifford asks us to rethink that assumption saying, “I hope so, because space needs you.” Do you see a place in space for someone like you?

Ryan Devitt
Ryan Devitt is a writer, a reader and a technology soothsayer. He studied marketing and computer science at Louisiana State University, and has a particular interest in the history of humans poking around in space.