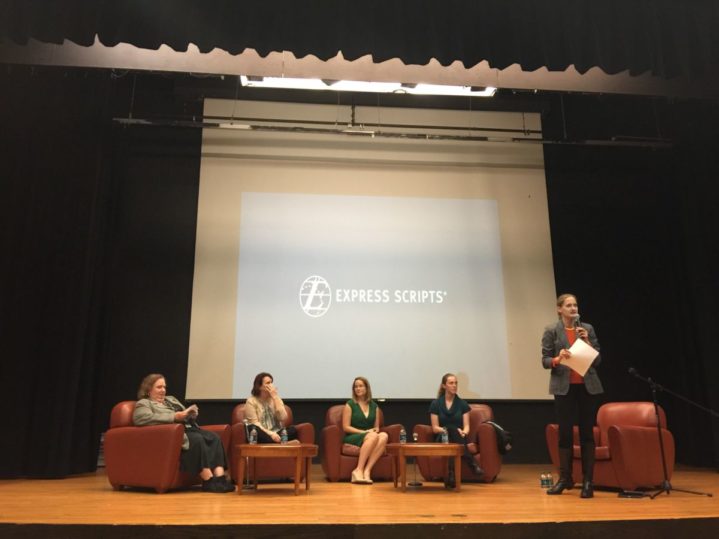 On Wednesday, October 26, Express Scripts hosted a screening of the film “CODE: Debugging the Gender Gap” at University of Missouri St. Louis.

The problem, presented by Neal Sample, CIO of Express Scripts to an audience including middle and high school students prior to the film screening, is that the number of women in technology is going down.

Sample said, “I have a daughter. When she enters the workforce in 2032, I absolutely want it to be a level playing field for her, so that she has the same opportunities as her brothers to get a high paying job in technology–because that’s what we all want.”

Sample reported that the percentage of female computer science and computer engineering graduates, having peaked in the 1980s at 36%, is now at 20%. Sample said, “We’ve cut that number almost in half. That’s a pretty sobering statistic. Not only is it one in five, but we’re going in the wrong direction. Still. So to me this is an incredible problem.”

Attracting Women and Minorities to Study IT

Vicki Sauter said UMSL works to attract and retain underrepresented populations in tech by providing strong role models and investing in them.

Sauter said, “In the very first performance appraisal I had at UMSL, my dean said he thought I was great because I was a role model. And I went away very upset.”

“I thought, ‘I told him all of these things that I had done, and the fact that I’m a girl is the most important thing?’ Over the last 37 years I’ve come to accept what he said a little more gracefully. I think role models are important – that they see that women can be successful.”

Sauter described some of what the UMSL Information Systems program does to attract and retain women and minorities:

Representing IT as an exciting, attainable career to young people

Sophie Russo graduated with a bachelor’s degree in Psychology from Missouri University of Science & Technology at Rolla, and her first job out of high school was as an IT recruiter before she changed course toward IT. On the panel, Russo talked about why IT is exciting, and why software engineering wasn’t her first choice of career out of high school.

“You can work in whatever industry you would like to work in as a computer professional. If you’re interested in fashion, you can go and get a job with Macy’s, or a design firm.

I was at Grace Hopper last week and Rebecca Mincoff who is a fashion designer was there talking about her collaboration with Intel and how they’re making wearables under her brand.

“I think I wasn’t exposed to computer science and engineering largely due to just my high school experience. We had computer class but that taught us how to use the word processor and Microsoft Word.”

“And that was about as deep as it got at my high school. I was in a sorority at Rolla and all of my friends were engineering students.”

“Their high school experience was a lot different. They had robotics teams and different engineering clubs in high school so I think that exposing people before college is really what we need to focus our efforts on because by the time you get to college you have an idea of where your life’s is going to go, so if you can make that impression earlier, I think that that’s really where it lacks.”

“You don’t really aspire to be something you can’t see or picture yourself being. You see doctors on TV and doctors in real life. You see teachers at school.”

“You see all these different types of people in careers in the world but you don’t necessarily see computer programmers except as depicted in the media as the nerdy guy. So you don’t really consider that as a career for yourself at all. I think that early high school years would have been the best time for me to explore that.”

Elizabeth Russell loved playing computer games as a young girl, but didn’t connect that activity to a career in IT. Russell said, “In high school, my first exposure to coding was something called “Squeak” and I believe it’s still a thing today.

Squeak is a program that runs on your computer and you can drag and drop little mice and little tools onto your screen and you can tell them to do things at different times. So it’s really building the blocks of computing.

And I thought it was cool and I spent a lot of hours making mice run around tracks, and making cool things happen, but unfortunately I failed to bridge the gap between doing that activity and what a computer science or engineering professional would be, so when I entered college I thought I was going to be an anthropologist because it seemed like an appropriate thing to do for someone that didn’t know what they wanted to do.

Russell attributes her eventual success in entrepreneurship and as CEO of a software development company to her stubbornness.

“I’m sure this was a very minor vibe that he was giving me, but I picked it up like that and I said ‘I am changing my major to biomedical engineering.’ I had no idea what that would mean.”

“When I started looking into jobs I realized that there’s a ton of money in computer science and not only in biomedical engineering, which is an exciting field, but those coders make a lot…a LOT a lot of money.”

“For almost that reason alone, I started taking some computer science courses online. I didn’t really want to take those courses at school because I still had a lot of biases about who those people were  …and I realized it was pretty accessible it was easy!”

“It was fun! Parts of it weren’t easy but it definitely wasn’t this big tower that many people build it up to be.”

Removing bias and offering flexibility in IT jobs

Tonya Browning, Vice President of User Experience at Express Scripts, is a rare VP in a technology role and has been involved in many hiring decisions.

With the exception of Express Scripts, which is a relatively recent role, Browning said, “In my entire career, in every single job, including the four startups where I worked, I’ve been in a meeting where we’re looking for computer engineering talent, and someone has said, when I ask ‘Are these the only resumes?’, when only white men being considered, and they look at me very seriously and say, ‘Well, there aren’t any qualified candidates outside of these candidates.’ And I can’t tell you, personally, to see that year after year after year, and from very well intended people that I had come to know and respect…”

“I said, ‘I’m not here to tell you who to hire, I’m here to tell you you need to have some diverse candidates. Give them a shot. Take the names off.’ One of the most effective things I’ve seen work is portfolio assessment. You’re hiring a designer or someone doing engineering and they have some design and code doing a code review, do you know if a man or woman wrote that code? No. What I’ve seen work very effectively in addressing those gaps is really moving toward that approach: portfolio assessment, code assessment. It’s really made a difference.”

Browning said, “A great Human Resources department helps. Women will leave on maternity leave or to care for an aging parent, for example. We have to make sure that there is opportunity to come back. Particularly in Silicon Valley, what I’ve seen work really well is people moving to working fewer hours per week. They’ll do job sharing. I think job sharing is a fantastic way, when you have other obligations, to still keep a foot in, and then come back when you want. Often you come back having had incredibly engaging experiences to share. I am seeing headway there, but I think we have a long way to go.”

Learning and speaking the names of women and minority technologists

Whether the issue is diversity or gender, representing the underrepresented is key.

Browning said, “I think the answer is mentorship and sponsorship. When you talk about moving up in your career, someone has to speak your name. You have to be part of that conversation.”

“We have to take some ownership, if we’re not speaking those names, there is so much talent there. When hiring, I look at internships. I don’t look at GPA or where you graduated. That’s part of the code you have to break. No one tells you that. If they haven’t had someone spend time telling them how this works, they need someone to do that.”

Susan Stith, Vice President of Diversity, Inclusion and Corporate Giving at Express Scripts was not on the panel, but presented panelists with the statistic that of all degrees in Computer Science, only 18% are earned by African Americans and 19% by hispanics. Stith asked, “What do we have to do? Where do we have this conversation?” Stith, who is African American, also noted the absence of African American representation on the panel (and that as an organizer of the panel, she was aware of the gap).

Imster said, “Locally, we have Crystal Martin, Coder Girl Program Director, who is amazing. Morgan DuBahn, Founder at Blavity out of WashU. We have Trina Clark James, Regional Director at NPower (nonprofit) who started a charter school and was an early coder. Role models exist in St. Louis, although women of color in this space are underrepresented. I want to give you money (from Arch Grants), others on the stage want to hire you. There are more organizations to help you today than ever before.

Russo said, “I think a lot of the responsibility falls back on us, who have at least entered the workforce as computer science professionals to go back and mentor young girls and show them that this is something you can be and show them a familiar face and kind of offer guidance and try to keep the relationship open. You can’t do that for everybody, I know, but I think all of the women and people of color who are in this spot need to take responsibility and reach back.”

Russell said, “Everyone in the room who has seen this film and heard our testimonies is responsible for carrying on the message. And this can be as simple as adjusting your language when you speak about a STEM role, or adjusting your personal views on what that role might entail or who might fill that role. I just encourage everyone to think a few minutes about simple things like she and he and where we use those words.”