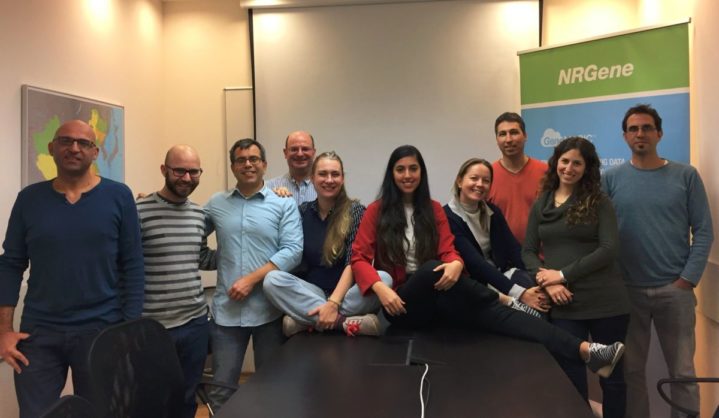 NRGene Is Racing Against Time to Solve Hunger

It’s a big challenge, but NRGene is racing against the clock to solve it. Luckily, they’ve got a few ideas in mind: “One important solution will be to accelerate breeding by using big genomic data to efficiently select and advance desirable genetic diversity,” Neuman says.

One of the original focus areas for the company led to their name: as they were trying to achieve energy crop improvements through gene information, the effort led to a twist on the letters “NRG” for energy and “gene” for genomic information.

CEO Gil Ronen and Vice-President Guy Kol started the company based on the idea that “increasing amounts of genomic and genetic data are being produced while companies and researchers need to efficiently translate that data into clear decisions on crop and animal improvements,” Neuman says.

Since then, he says, “NRGene has developed unique capabilities to analyze big genomic data to uncover genetic variation and help accelerate breeding decisions for animal and plant agriculture companies, NGOs and academics.”

When you’re trying to solve a global problem, it makes sense to work on the solutions at a global level.

“It was clear that the market for such technology is located around the world, particularly in areas where agriculture is important,” says Neuman.

The company was founded in Ness Ziona, Israel, and is still headquartered there. It also has subsidiaries in St. Louis and in India, employing 55 employees total.

“St. Louis is in the heart of U.S. agriculture, with both large and small companies and academic centers located nearby. Because of this, it was clear that NRGene should be here—giving us a central U.S. location and access to many potential customers,” says Neuman.

The company’s sales and marketing team covers global markets, which Neuman knows well. He works out of St. Louis now, and the St. Louis Mosaic Project was essential when it came time for him to resettle.

Neuman had first gathered experience working in a small startup company in Panama before coming onboard with NRGene and moving to Israel to work with them. NRGene opened the St. Louis office in spring 2016, and he moved to the city four months ago.

For him, the Mosaic Project was essential for building professional and social connections. “Moving by yourself to a new city is challenging in the sense of building up a life outside of work, and Mosaic has provided that link to help ease that transition,” Neuman says.

“Having both a Latin and Jewish background, they have introduced me to the Latin community by inviting me to the ZocoLoco gala and introducing me to different influential people within the Jewish community in St. Louis,” he says.

“Betsy has been outstanding—she has been in touch with me since day one and has connected me to wonderful people,” he says. “She’s helping newcomers integrate to St. Louis and making it feel like home.”

“The assembly algorithm has taken a team of scientists at least four years to develop into a turnkey operation and it is continually being improved,” Neuman says. “We are now selling the capability to compare multiple genomes and leverage the DNA differences among individuals within a population—the across genome comparison is call a pan-genome analysis.”

Of course, other companies are working to solve hunger too. But NRGene believes it has a few advantages over them:

“While other groups can perform this service, we believe our output is faster, is less expensive, can handle complex genomes and is of higher quality than others,” Neuman says. “In addition, we have very unique analytics method to organize and database the information from multiple genomes. This capability and product is unique in the marketplace.”

Companies are buying into their approach: Monsanto and Syngenta have both called on NRGene for help improving their breeding pipelines, says Neuman. But there’s still more to come for the company.

“I would be excited to see NRGene’s GenoMagic platform utilized extensively across both academic and industry to transform how scientists can make breeding decisions using big genomic data,” says Neuman. “I am also excited about NRGene’s next phase of offerings: technology to assist in human diagnostics.”