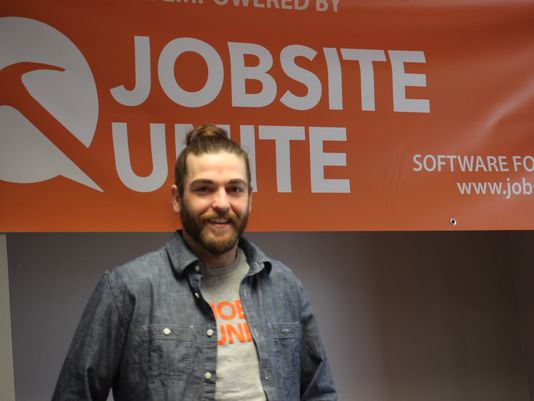 Jay Olsen has worked with his hands his whole life. The founder of Jobsite Unite may have swapped a hammer for a mobile device these days, but there’s no doubt he knows construction.

“I grew up around it. My dad was a shop teacher and we did a lot of construction in the summer. My grandpa owned a residential (home) building company as well,” he says.

Olsen ran a subcontracting company for six years himself, and during that time, he started to notice a problem.

“[There were] obstacles communicating with other workers on jobsites and obstacles trying to communicate with my crews of workers working remotely,” he says.

Construction projects are the sum of innumerable moving parts, all of which need to be coordinated smoothly for success. So Olsen got to thinking: why not give contractors and subcontractors a platform for worksite communication?

Jobsite Unite was conceived in 2011, and created in 2012 in Des Moines, Iowa. The platform allows for channels of communication on specific sites or projects, including direct messages, photos, location check-ins and profiles. It’s designed to facilitate faster coordination and organization in an industry that, for many years, has lagged behind in those respects.

“Everything has changed so fast in the construction industry since mobile devices were introduced. Everybody is getting used to the speed at which it operates now. We’re just now catching up with the rest of the world,” Olsen says.

“It just surprises me [contractors] are not acknowledging what other industries are doing, and how these collaboration tools are providing efficiency in other industries.”

That’s why Olsen is in a unique position. He’s able to marry extensive experience with technological proficiency in a way that few other competitors in the space can.

“I just happened to grow up around that technology as I was working in the industry. The technology was growing at the same time my career was,” he says, adding that Jobsite Unite’s conception was a matter of timing within the industry.

“Mobile is just now getting to the point where it can be utilized in that capacity. Before, not every worker on the jobsite had a miniature computer in their pocket.”

But even as workers like Olsen become more prevalent, larger contractors are still sluggish in their response to a shifting industry.

Olsen made the decision to transition away from his subcontracting company and into Jobsite Unite full time in January —a move that paid off. One month later, Jobsite Unite was one of three non-St. Louis companies accepted into the 12-week Spring 2015 class of Capital Innovators (ranked one of the top 10 accelerator programs in the country) bringing them to St. Louis along with $50,000 in seed money and mentoring.

A few months later, Jobsite took advantage of another STL-based program winning a $50,000 Arch Grant in June 2015. These allowed Olsen to open up business development offices in St. Louis.

As the company has progressed, Olsen has found adoption of the platform has been dependent on the mindset of the users. “It comes down to identifying the right personnel working within those companies who are forward-thinking enough and are trying to figure out how to get better at what they’re doing,” he says.

“Unfortunately in the construction industry right now, it’s a lot of older players who have been doing things the same way for 30 or 40 years and they’re just not in the mindset of looking for new or innovative ways of doing things.” In the Midwest, Olsen estimates Jobsite Unite might a bit ahead of its time, but that hasn’t stopped him from continuing to push the service forward.

Since his time with Capital Innovators and the funding he’s received from the program and Arch Grants, the company is working to expand the platform to act as timecard software as well as provide real-time workforce analytics and be a workload management tool for contractors.

As competitors begin to surface on the coasts, Olsen is banking on the diversity of his experience to add value the other guys can’t match while the Midwest region evolves.

That knowledge translates into a clearer picture of end user needs and allows Jobsite Unite to anticipate changes in the industry and grow to match it. Though it requires a bit of handholding, Olsen believes the industry is ready to move the next chapter.