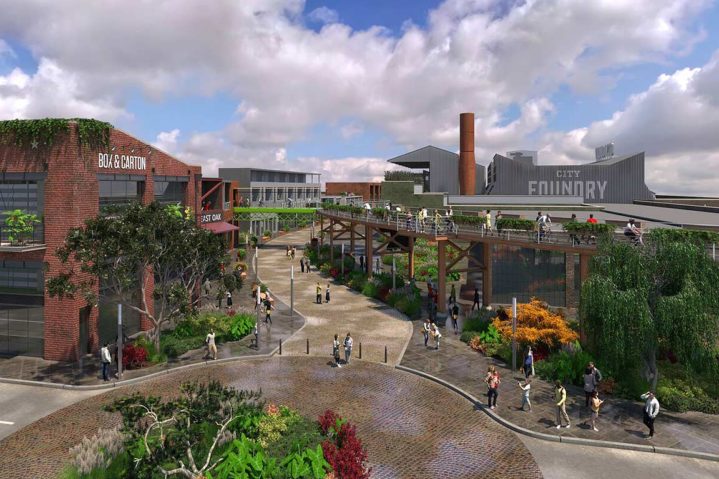 Within the next few years, midtown St. Louis near SLU may well be the busiest 400 acres in St. Louis in terms of new development. Even if you aren’t familiar with the area you might be able to conjure up the old Pevely Dairy buildings, or the iconic green copper roof of SLU Hospital (both still standing) from memory, or perhaps you have noticed the recent construction for the new SSM SLU Hospital set to open in 2020. The St. Louis Midtown Redevelopment Corporation, a certified 353 redevelopment organization has big plans for the neighborhood.

Without getting too technical, the Redevelopment Corporation reviews all new development plans and can grant tax abatement of 100% for 10 years and then 15 years at half tax. They also collect an assessment tax of 15 to 50 cents per square foot on all new development that goes back into a general fund for reinvestment.

Its board of directors is made up of mostly SLU staff: a faculty representative from the School of Business, the Director of Facilities, the school’s CFO, the Regional President of SSM Health St. Louis, and a member of an independent planning organization. All of their meetings and notes are under Missouri Sunshine Laws and require public notice.

A Partnership Beyond Convenience

Four years ago, Saint Louis University purchased Saint Louis University Hospital from Tenet Healthcare, a for-profit hospital group based in Texas, and contributed it to SSM Health St. Louis in exchange for a financial interest and governance rights in their new integrated partnership. In 1998, Tenet had bought the hospital from SLU, which has always had a big stake in its success, and more importantly the success of the community and neighborhoods around it.

Brooks Goedeker, the Director of the STLMRC talks about the hospital under its previous owner, “You’d go there and you’d see there hadn’t been a lot of improvements in a long time.”

Redevelopment as a Mission

Washington University and BJC Healthcare has done this before so the model for a joint community and real estate redevelopment corporation between a university and a hospital is not new. Brooks Goedeker previously ran the community development arm of that partnership, as the Executive Director at Park Central responsible for Central West End and Forest Park Southeast neighborhoods adjourning the BJC complex.

The partnership between SSM and SLU works similarly, but SLU is seen as the driving force behind the overall Master Plan and is working hard to develop deeper ties to the neighborhoods within the Zone.

“Community Development,” he says, “is very important to SLU and SSM, since their values are aligned with the neighborhood organizations and local businesses.”

Brooks points to an area on the map at the edge of the southern campus, where tiny boxes indicated a small residential neighborhood, commonly known as the Gate District and the Tiffany neighborhood, none of which, according to the plan, will be displaced or bought out; and all of which will most likely benefit from surrounding development through net higher property values.

“Those folks have a seat at the table and a neighborhood association now,” Brooks says.

The University and The Hospital

Brooks Goedeker thinks SLU and SSM are uniquely qualified for the role. SLU is one of the largest urban campuses in the nation and is the fourth largest employer in the City. It already takes on a huge responsibility for the upkeep and security of streets, street lights and other maintenance on and near its campus, not to mention the basic safety of their student body and staff on and off-campus.

SSM Health is a St. Louis-based company with a stated commitment to expand in St. Louis. Contrast this with texas-based Tenet Health which is actively shedding hospitals in the St. Louis area. The $550 Million dollar SLU Hospital expansion represents a huge investment.

SLU also has a brain trust in urban planning and policy through its Department of Urban Planning and Development, the Richard A. Chaifetz School of Business, its School of Law and School of Social Work. Resources which the Redevelopment Corporation leverages for their expertise and guidance, Brooks says, giving them a deep pool of talent and perspectives to draw from.

Long-Term Planning Vs. a Wait and See Approach

It’s hard to argue against that. The broken facade of the old Pevely Dairy complex, where the new SSM Hospital is being built, sat as a contentious pile of rubble for more than a decade at Chouteau and Grand, the Armory had been vacant for 13 years and underused before that, the City Foundry’s empty factories sat rusting while Cortex sprang up to the west.

In all these new projects, Goedeker says, the STLMRC reviewed plans and deemed that other financing options had been exhausted before receiving tax abatement. He is quick to point out that of the three marquis projects planned, the Foundry and the Armory and an Element hotel on Forest Park Parkway, all part of the newly christened Prospect Yards district, none have gotten the full 100% tax abatement.

As a community planner for 16 years, Brooks relates a story he says will happen over and over again without a sensible tax abatement scheme.

“A developer builds a project, say for $20 million dollars and replaces an eyesore. It’s good for the neighborhood, it’s good for the area, but then they come back to the City and ask for sidewalk or alleyway improvements, street paving, street lights, etc. (all reasonable).”

“But the City has no money and it’s up to the developer to pay for this. This way, the developer can take on the costs the City can’t afford. The Redevelopment Corporation makes sure they hold up their end of the bargain.”

The University has long recognized the critical role that institutions of higher learning play as centers of sustainability and innovation in their communities, and SLU is a founding and active member of the Cortex Innovation Community.

Located directly west of the new redevelopment area, Cortex is a 200-acre innovation and technology hub that, when completed, will house 15,000 permanent technology-related jobs in over 4.5 million square feet of mixed-use spaces. More than 250 companies already call Cortex home, and going forward, SLU will integrate its own plans with those of its neighbors in hopes of creating a high-tech, high-engagement community that will attract interesting and talented individuals from the Greater St. Louis area and beyond.

The idea of a connected innovation corridor, with WashU and the Cortex Innovation District as an anchor to the west and SLU’s law school campus and the City’s center to the east, all conveniently accessible by MetroLink and the planned Chouteau Greenway, excites many in the City’s growing innovation community.

Cortex is more than living up to its promise of attracting both small and big players to St. Louis (Microsoft, Accenture, and more startups than you can count) and the projects under the St. Louis Midtown Redevelopment Corporation’s authority form a critical link in the chain to connect the City’s central corridor. With construction planned and already underway, that vision is finally taking shape.